The Door Into Summer 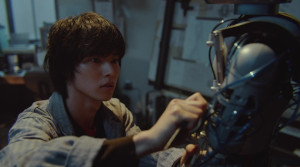 Story: In 1995, Soichiro Takakura (Kento Yamazaki) is a scientist whose area of expertise is robotics. After his parents had died, a colleague of his father took him in, and he learned everything he knows about robotics from him. But then his foster parents also died in an accident, so that he has no one left anymore, except for his stepsister Riko (Kaya Kiyohara) and his cat Pete. However, Soichiro has come to quite some fame, as he has developed a household robot that could soon go into production. He eventually assigns half of his stock options to his fiancée Rin (Natsuna Watanabe), but this turns out to be a big mistake. In the next meeting with his boss, who wants to sell the rights to the robot, Soichiro gets overruled and is thrown out of the company. He is on the brink of giving up and wants to go into cryogenic sleep for thirty years, but in the end, he decides to fight and confront his fiancée. However, the dispute gets out of control, and the inventor gets sedated and finds himself in a cold chamber. He wakes up disoriented in 2025, where the android Pete (Naohito Fujiki) guides him through his new present. When Soichiro searches for his stepsister, he stumbles upon some facts that seem to make no sense, at first. But little by little, he manages to put the puzzle pieces together. 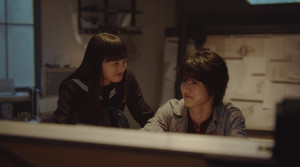 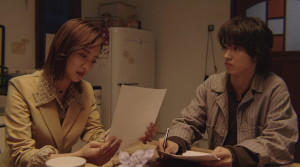 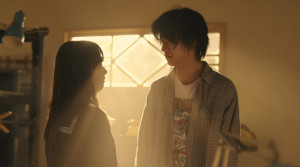 Review: The whole time I had a strange feeling about "The Door Into Summer". A parallel universe, corresponding to our world, in which there has already been enormous progress in the field of robotics in 1995, and the first plans for a plasma battery have already been put on paper as well? Then we also get a future which is set only three years from today's 2022, but there are already androids and self-driving cars? There is an obvious explanation for all that: The movie is based on the eponymous novel by Robert A. Heinlein from 1957, which was, of course, adapted a bit for the screen. But it still feels as if someone from the 50s was looking ahead into the future and did some huge miscalculations about the time's advances. Apart from its interesting story, however, there are a few big problems with the movie. For example, the original material does not seem to have been adapted adequately, and the individuals do not get enough room to feel three-dimensional. 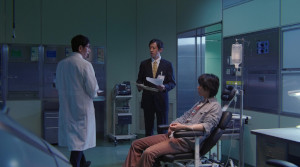 Kento Yamazaki ("Your Lie in April") plays the young scientist and inventor. He simply sits over a piece of paper for a few days and then has just created world-changing new technology. Fair enough, you can probably still overlook something like that. But then there is the stepsister, played by Kaya Kiyohara ("You're Not Normal Either"), who is romantically interested in the inventor. But the young man has no interest in her, as she is still a child. Being sixteen years old, she thinks differently, but Soichiro wouldn't see his stepsister as a love interest even if it weren't for the age difference. Therefore, it is a bit strange that the story's beginning is already structured as if the inventor will at some point realize that she is a good match for him. Since this is a sci-fi flick, the problem with the age gap could certainly be solved somehow, but a happy ending in respect to the love story just seems a bit forced. 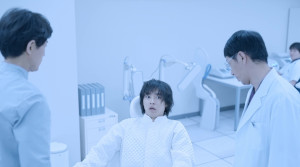 The two also don't have that much time to develop a certain kind of chemistry either, and that goes for other characters too. Even though the movie simulates a specific dynamic between the characters, for the viewer it always seems as if the director skipped several book pages, and then you are thrown into the middle of an already established relationship. This is especially true for the second half of the movie. The beginning actually struggles with another problem. We spend about 45 minutes in 1995, although - at least, according to the trailer - you get the feeling that the movie should mostly take place in the future. In addition, a lot of characters are introduced way too late, so that even the android Pete doesn't get the platform it deserves. The introduction should have been kept more compact, because after the rather slow-paced beginning, you suddenly get a second half in which the events kind of come thick and fast, and you never have time to find your bearings. 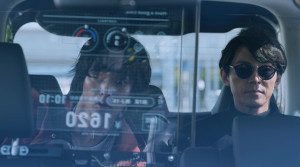 With "My Tomorrow, Your Yesterday" director Takahiro Miki created one of the best (mystery) romantic dramas of recent years, and this time, too, the story was based on a novel and everything revolves around time. And once again, Takahiro manages to do a decent job in terms of visuals, but it's kind of strange to see a futuristic Japan, which actually looks exactly like today's, except that we get a few peculiarities, such as the already mentioned androids and cryo-sleeping chambers. Somehow, the overall picture of this world is not coherent, and perhaps the moviemakers should have deviated from the original a little more. However, it must also be said that in sci-fi stories about time, there are often one or two plot holes, especially in more recent movies. But since "The Door Into Summer" is based on a novel written by an author who knows his way around timelines and time loops, you might find the decision towards the end a bit illogical, as there would have been another possibility, but it is still inherently consistent, and the ending is therefore quite satisfying. 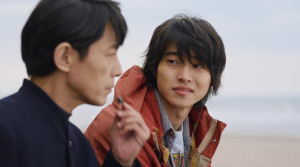 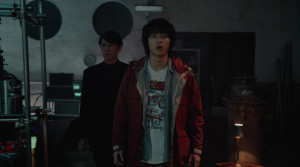 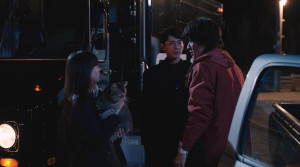 What makes the ending a bit illogical, though, is the fact that the scientist does not see Riko as a love interest and that this also has some influence on his decision later on, only for the movie somehow still trying to find its way into a romantic happy ending (which, as mentioned before, is much too obvious right from the start). The somewhat flat characters are also a big problem, so much so that Soichiro's cat actually seems to have the most amount of personality - but admittedly, it also puts a lot of effort into it. A few allusions to classics like "Terminator", "Back to the Future" and "The Time Machine" show genre fans that the movie is well-aware of its roots, but the path it chose has already been well-trod. "The Door Into Summer" simply lacks a breath of fresh air. While the movie is therefore quite recommendable as genre fast food, you still might feel like watching a mediocre classic, which was simply filmed too late.