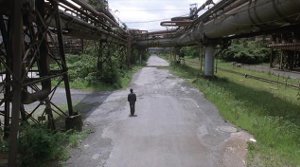 Story: Igarashi (Susumu Terajima) lost his job and wanders aimlessly through an industrial area. He then comes across a Yakuza who says his last words and dies. As this happens, a policeman passes by and Igarashi is put into prison. There, he meets a murderer, who killed his wife's lover and now regrets not killing his wife as well, because he is certain that she has a new boyfriend now. Igarashi is soon proven to be innocent and gets released. Out of curiosity, he goes to see the inmate's wife and finds out that she really does have a new boyfriend. He keeps wandering around and passes a burning house. A woman is sitting in front of it and she is completely distraught because her kids are still in the house. Igarashi runs in and saves the kids. After that he is honored by the police. He remains unfazed by what is happening around him and keeps on walking, when he gets hit by a car. In the hospital, an old man tells him that he has led a good life, but that he wants Igarashi to visit his wife and see if she's doing fine. After the old man gives the protagonist his wife's address, the man dies. Igarashi leaves the hospital and checks in on the woman. But she is lying dead on the table and holds a lotto ticket in her hand. Igarashi takes the ticket and is somewhat surprised to see that it has the winning numbers. In theory, the unemployed man would have quite a lot of money now, but he experiences some other weird things on his trip... 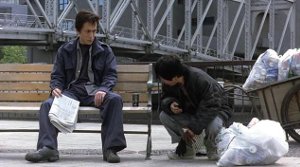 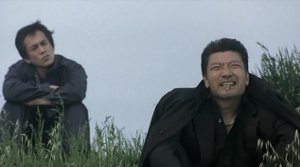 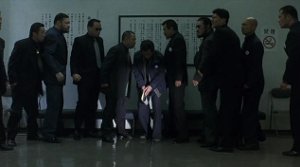 Review: Considering the number of productions and the limited time you have in life, it's often a pity that it is just because of sheer coincidence that you manage to watch a movie by a director you meant to keep an eye on some years ago. After all, Sabu's "Monday" was a very well-done movie with a unique handwriting. "The Blessing Bell" is less technically polished and also not addressed to a mainstream audience, but rather to film festival goers. Yet, despite its pretty slow pacing, we once again get Sabu's exceptional composition of images which pulls you into the movie right away. This is also the reason why we are always eager to see which new scene our protagonist will step into. Because the images are always shot like stage settings. The camera is positioned in the far distance and captures the scene as an overall image, there are no cuts. What might sound boring at first, creates a special dynamic. 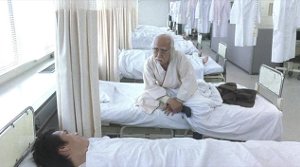 In addition, the director manages to perfectly capture his deadpan humor that way. The Yakuza's faces when they simply stare at Igarashi as he suddenly gets up, is just one example for the special and oftentimes funny way of communicating between the characters. Because, apparently, Igarashi is mute. As we are dealing with an art house movie, you never know for certain whether he is actually anatomically incapable of talking or whether this is just the director's choice trying to create a "sophisticated" movie. If you consider the latter, Sabu kind of loses a little bit of sympathy because it is such an overused stylistic device. Even seventeen years ago. Sometimes the conversations don't seem authentic when Igarashi simply answers with a shake of the head or just doesn't answer at all. 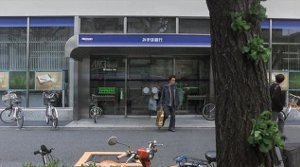 It is not particularly hard to follow the story, even if you might not get right away that Igarashi is one of the company workers we see in the beginning, but that instead of protesting being fired like his colleagues, he starts looking for the meaning of life. It is an existentialist story, told meditatively and yet, or maybe even because of it, you cannot expect to end up at a specific destination. Of course, it is the journey itself that stands in the foreground. However, the ending is also praiseworthy because it gives the movie a strange twist and makes you think as you have to question the lens through which you have seen everything before. At the same time, Sabu also delivers his typical ironic wink. The plot goes round in circles, things are repeated, but without getting boring, and society gets criticized as well. 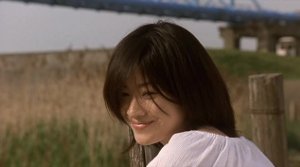 One of the movie's biggest topics is money. Next to that, death is frequently addressed as well. Igarashi wanders around the world like an observer. The people he meets, however, react to him and he becomes a very important person for the dying old man or the suicide victim, for instance. Nevertheless, you can't help but get the impression that the unemployed man is a ghost, who nobody can see except for those who are dying or who suffer from some other pain. This might be due to the fact that with his blank face and his stoic walk Igarashi looks like somebody who is at the verge of being devoured by an abyss or somebody who would jump into it himself any second. Most people avoid people like that. Susumu Terajima ("After Life") actually doesn't have to do much acting-wise, but a subtle performance has to be done skillfully, so that in some few scenes important aspects can be portrayed convincingly. And the lead actor manages to do so. 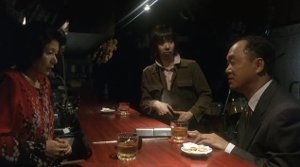 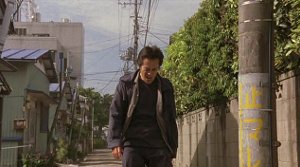 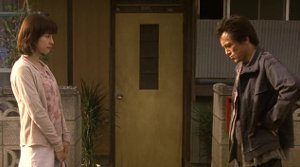 Of course, "The Blessing Bell" is not a movie to recommend to everyone. The way it is narrated is slow-paced, but in an interesting way. Especially at the end, when we see the protagonist walk through the individual scenes in a temporally condensed manner, we get the impression that he is wandering from one picture to the next. As if you were flicking through a picture-book. This way, Igarashi seems like a visitor in other people's lives. We can see the crossing points with other people's fates. What he is searching for is actually pretty clear, as it is what everybody is searching for. But in the end, he does not get that one special experience that changes everything. Instead, several experiences add to something that gives him at least some kind of direction. Whether the resolution is satisfying to you, is another question, but at least it is honest and, as mentioned before, it works hand in hand with Sabu's typical irony. A calm and slow-paced movie, whose 87 minutes could easily have been reduced to half of that running time, but then the meditative atmosphere of the movie would have gotten lost, which is an important and appealing part of the movie.