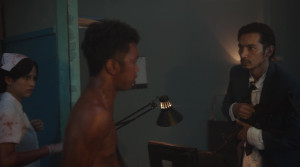 Story: Dina (Putri Marino) has completed her training as a police officer and her father promises to spend more time with her from now on. What Dina doesn't know, however, is that her father raised four orphans and trained them to be killers. They take care of the scum of society. The group consists of the unofficial leader Topan (Abimana Aryasatya), the explosive expert Alpha (Lutesha), the sniper Jenggo (Arie Kriting) and Pelor (Kristo Immanuel), who is usually used as bait. The four of them are not thrilled when their foster father tells them that he is retiring, but they accept his decision. Soon after that, their foster father is murdered, though. Dina is devastated, but still doesn't know anything about the secret life her father led. Three years go by, and his murder still isn't solved. Eventually and by pure chance Dina suddenly finds a clue. Following this clue she in fact runs into Topan at a hotel on an island where her father wanted to retire. When she meets Topan, a hit squad led by Suranto (Marthino Lio), who soon turns out to be the murderer of her father, also shows up on the island. If Topan wants to survive, he first has to convince Dina to put her search for answers on hold and go see his friends so that they have a chance of surviving the looming blaze of gunfire. 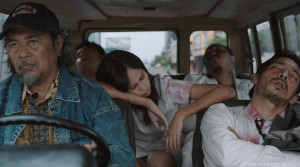 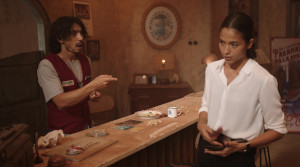 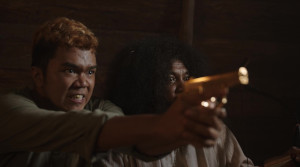 Review: Without Gareth Evans' "The Raid" I would probably never have taken notice of Indonesian cinema. For fans of the genre there is simply no way around that incredible action spectacle. Because of the increasing popularity of leading actor Iko Uwais, who now also gets roles in Hollywood (including a tiny part in Star Wars VII), I got to the pretty successful action flick "Headshot", which was co-directed by Timo Tjahjanto. With "The Night Comes for Us", featuring Iko Uwais as the villain, he then created a particularly violent and great martial arts flick with an extremely dark tone. But the fact that Timo Tjahjanto was now supposed to shoot a movie for Netflix that includes at least as much humor as action, made me a bit suspicious. Indonesian humor might cause a little culture shock, or at least, it might not work for an international audience. Unfortunately, I ended up being right about that. 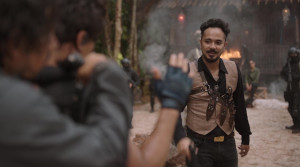 That in mind, it is surprising that the movie is quite successful on Netflix, and that it has received good or even great reviews from most critics. However, I am not alone with my rather negative review, at least not when it comes to critics who specialize in Asian cinema. It seems to be another case of flocking behavior, in which a few people think that they are supposed to like what they see for reasons of open-mindedness, therefore writing something positive, and the rest simply follows. What is even more surprising is the fact that you even get a few powerful women here (nothing new in Asian cinema, though), which will please "woke" critics, but there is also some crude - basically sexist - humor. The humor simply doesn't work, and it is always taken to extremes until you completely lose sight of what's actually happening on the screen. It's beyond me why you should shower something like that with praise. 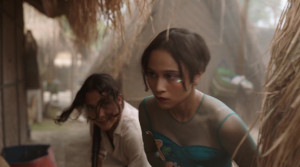 At the beginning, the jokes are even okay, although clearly focused on slapstick elements. But at the latest when an unintentional drug frenzy caused by a tea made out of toad skin gets exploited for several minutes, you know what you have to expect in the further course of the movie. In terms of tone, however, the silly humor does not fit the numerous violent action scenes at all. It's as if the director wanted to deliver a family movie, in which half a head is blown away by a shotgun every now and then. Because apparently you are not supposed to take all that too seriously, the movie is even rated TV-MA (or an age rating of 16+ in most countries), which is an absolute miracle. In addition, the script is not able to create a common theme, and in terms of the story there is not much to work with either. But even if there was, what you get represents the lowest of lows. For some reason, Alpha is supposed to be the only one who can explain the relationship between the four and Dina's father, which is why they absolutely have to go see her. The opposing parties on the battlefield repeatedly refrain from eliminating each other, even when the perfect opportunity presents itself. After all, we haven't reached the finale yet. And there are countless examples for that phenomenon. 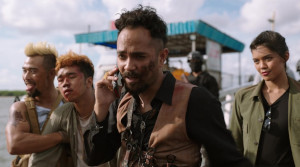 Even if you try not to pay attention to the story's development, you'll quickly notice that there is no real connection between the different scenes and that they are randomly strung together. The fact that the director needed 140 minutes for all that is just absurd. 90 minutes would have worked much better for "The Big 4". So, all that's left to save the movie somehow is its characters. Jenggo, Alpha and Pelor fall into the category of manga characters incarnate. Taken to extremes, they are sometimes even entertaining, but ultimately just clichéd. At least, Topan, the leader of the four, represents something similar to a character, and actor Abimana Aryasatya is also responsible for the few pretty well done close combat scenes. But the real star of the movie is Putri Marino as police officer Dina. She holds everything together and grounds the movie, even though she has one of the craziest moments during the mentioned drug trip. But she somehow manages to convey this so convincingly that it does not undermine her rather serious character. 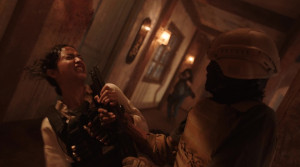 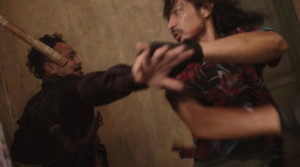 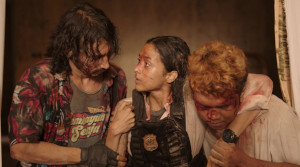 The salsa dancing villain, played by Marthino Lio, is not too annoying either, because the actor is also able to convince in close combat scenes. Those offer a lot of oomph and turn out just the way you would have wished the entire movie to be, even if the choreography is not outstanding. Unfortunately, "The Big 4" mainly consists of pretty unimaginative gunfights. Sure, it's worth mentioning that the director was able to produce such a movie on a smaller budget than "The Night Comes for Us", but the end result is far too long, crammed with "humorous" scenes that cause a culture shock, and the action scenes are anything but memorable. At least, the showdown is able get a few bonus points, but it's not enough to hide the fact that the script is bad and the characters are stereotypical. "The Big 4" is a violent action flick as well as a slapstick comedy - just not as an integral whole, but taking place parallel to each other. It's a movie that you definitely don't have to put on your watchlist.