The Age of Blood 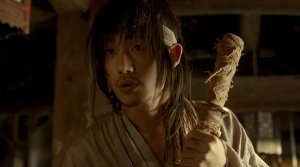 Story: During the Joseon dynasty Kim Ho (Jung Hae-in) is without a job. When he finally gets a job it's not really the one he had in mind. He is appointed as a prison guard. One of the inmates is the traitor Lee In-jwa (Kim Ji-hoon), who has started a rebellion against king Yeong-jo (Ryu Tae-joon). Lee believes to be in the right since Yeong-jo has killed his own brother in order to ascend the throne. Lee's subordinates plan to free the rebel leader and eventually assault the prison. They kill everyone, but they didn't expect to run into someone like Kim Ho. The boy turns out to be an exceptional swordsman. However, since the men around Lee are also excellent warriors Lee manages to escape and Kim is badly hurt. He manages to get into the Royal Palace to warn the king's counsel about the commencing rebellion. Yet, Lee has also allies at the Royal Court and so Kim barely manages to get away with his life. Apparently, the queen is involved in the rebellion as well. Kim doesn't really have an interest in the political schemes, but now just wants to take out Lee because he had his prison stormed. A deadly fight follows, in which the future of the country is at stake, too. 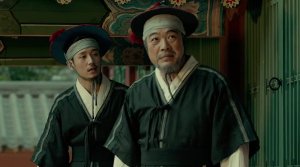 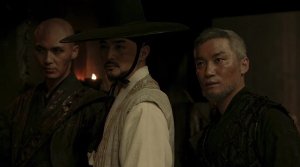 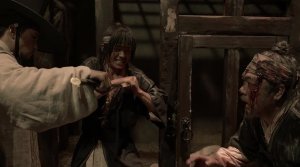 Review: When you realize after more than an hour that the location hasn't exactly changed, the movie didn't gain anything in terms of story, the fights turn out to be quite good, though, while the camera work leaves a bit to be desired at times, it becomes obvious that "The Age of Blood" is an odd political thriller at the Royal Court during the Joseon dynasty. A mixed bag, that in regard to quality constantly alternates between promising or even good and forgettable. Maybe a good explanation for this is that director Kim Hong-seon has worked on drama shows before. This also makes it seem more plausible why more than half of the movie is almost solely taking place at a prison. The rescue of the man who betrayed the king drags on too much, as you wouldn't expect otherwise from an episode of a tv series. 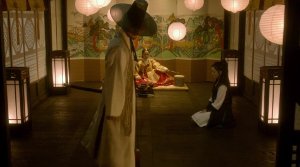 Director Kim Hong-seon has already covered king Yeong-jo in his tv series "Warrior Baek Dong-soo". The king has been the foundation of many stories and schemes, after all he has erased quite a bit from the royal chronicles. Thus, his story has already inspired movies like "The Throne" or "The Royal Tailor". Kim makes the mistake to leave a lot too nebulous without drawing the characters well enough for putting the complexity of right and wrong adequately into an intrigue-filled story. This is particularly striking towards the end, after we have waited forever to get the truth about the protagonist's true identity and his motives, only to be fobbed off with him not knowing why he acts the way he does himself. 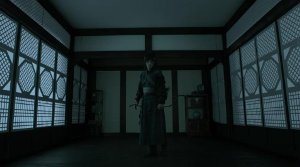 However, I have to admit that after a while the villains can't be regarded as such anymore. Things are a bit more complex. The way the king ascended the throne can't be called "legal", the antagonist has a few legitimate reasons for his actions, then again he butchers all and everyone at the prison without any mercy. That is until Kim Ho turns up. He is spared so many times that it becomes ridiculous. And his enemies don't learn from their mistakes either, although they don't seem to be stupid otherwise. What's strange, too, is that the protagonist is at first introduced as a generally discontent boy who isn't happy with his new job and when the prison is assaulted hides from the attackers. Then, he suddenly turns out to be an one-man-army that has no equal, except of the warriors around Lee In-jwa. They injure him a few times, but mostly Kim Ho is absolutely unaffected by his wounds. 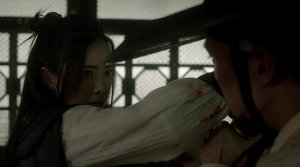 "The Age of Blood" hasn't been chosen as the title without a reason. There is quite a good amount of blood spilled and the picture is quite violent. The blood is clearly computergenerated, but it looks good enough and doesn't take anything away from the action scenes' authenticity. The action proves to be one of the flick's biggest strengths. The in parts quite well done chogreography almost makes you assume that it's a martial arts flick you are watching. Unfortunately, the directing isn't always on a par with it. There is amateurish camera shaking as we move around the actors, but on other occasions everything looks professional. Some of the close-up shots during the more quiet scenes seem a bit off and rather remind us of a tv series. Consequently, Kim's transition to the movie medium isn't without hiccups. Other unusual choices are for instance in respect to the historical backdrop which is presented as a comic. Probably to save money. 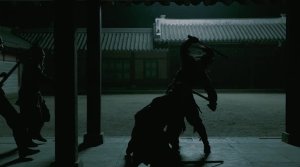 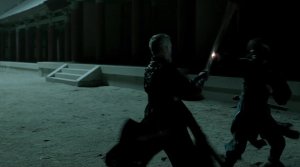 There has been saved money when it comes to the sets as well. Although the prison might be a nice location, we stay there noticably too long. Regarding the royal pomp there have been some cut-backs as well, as would have been in a tv show. However, this doesn't make as much of a negative impression as the sometimes shallow dialogue. The screenplay would have been in need of some polishing. All in all, the first half is particularly entertaining, but when Kim Ho turns out to be an excellent fighter this is at the expense of character depth. He suddenly becomes uninteresting and thus the whole movie falls apart. You also can't be happy about getting too little information about the different political parties for us to get a clear picture of the complex power struggle at the Royal Court. This leaves you a little bit lost and is the reason why you most likely will have forgotten about "The Age of Blood" very soon.