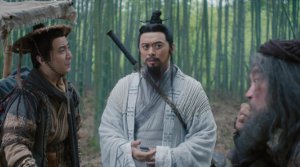 Story: Zhang Daoling (Fan Siu Wong) is a Daoist and accompanies his student Wang Chang (Li Lubing) on a trip. Soon, however, Wang is put under a dangerous spell. Fortunately, Zhang manages to save him. Apparently, the two are travelling through a dangerous area, which gets more obvious when they decide to stay at a tavern. There, the thief Hong Ying (Zhang Dong) wants to take them out with sleeping pills, but once more Zhang manages to prevent worse things from happening. After that, Wang suffers from poisoning, but Hong claims that she has only given him a sleeping pill and she even helps to nurse him back to health. The three are then attacked by some masked figures, though, who want to kidnap Wang. It turns out that the sorcerer Gu Ma (Su Mao) is the leader of a cult and presents himself as a savior in a nearby village. However, with the help of a witch, he actually tries to kidnap eight people who were born under the right stars and wants to sacrifice them during an ancient ritual that opens the gates of heaven. He hopes that this will give him a longer life and even more power. Zhang finds out that his fate is connected to that of the sorcerer, and he even gets help from the beggar Wu Xian (Yue Dongfeng), who also has a score to settle with the sorcerer. In addition, it turns out that Hong's brother, who has been missing for six months, is also one of the abductees. The ill-matched group decides to put a stop to Gu Ma's plans. 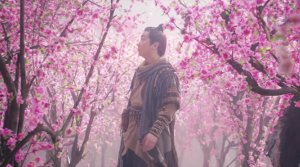 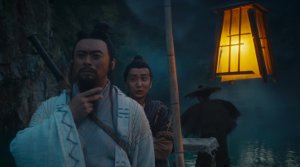 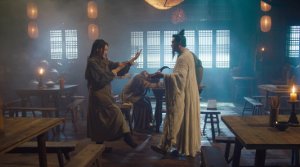 Review: Naturally, a movie about the founder of the Way of the Celestial Masters Daoism must include supernatural cults, human sacrifices and evil witches or sorcerers. Well, some may be bothered by the fact that you don't get a more or less historically accurate movie here, but if you're longing for the magic of fantasy/wuxia movies from the 80s and 90s, you are at the right place here. In some respect, "Taoist Master" has the edge over many modern Chinese CGI blockbusters like "The Thousand Faces of Dunjia". The reason for this is that, like the fantasy flicks from Hong Kong's golden age, it turns its B-movie charm into its strength. The effects may not always be completely convincing, but they seem less cheap than in some polished productions, where you would expect something better. In addition, the movie works much more with atmosphere and lighting, which is ultimately a good thing. 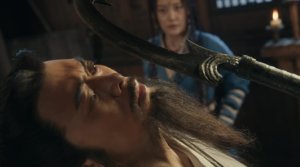 The first scene, which shows a creepy-looking cult gathered around a witch in the moonlight, already scores points with a lot of fog and beautiful lighting and immediately reminds us of the classic "A Chinese Ghost Story". The beautiful bright colors of the landscape, through which Master Zhang wanders with his student, are a strong contrast to that. Towards the end, there is also a ritual with a steel tree (?), which also prompts feelings of nostalgia. In "Taoist Master" a lot of things are a declaration of love to the way Hong Kong cinema looked in the past, and it still works surprisingly well today - even without the nostalgia bonus. There is simply something fascinating in the bluish lighting, which is intensified by a lot of fog and the somehow creepy moments, such as the one in the tavern, when we realize that the tavern owner is up to no good. 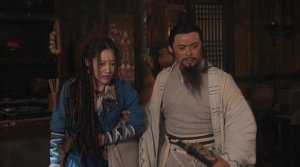 In addition, there is a colorful mixture of heroes, the kind of which you may have seen many times before, but who still manage to draw you into the movie. There is the wise master, who still carries demons of the past, because he could not help the weak, or the thief, who is actually only looking for her brother. The whole thing is topped off by an old, trippy beggar who is always drinking, but naturally he has extraordinary skills too. With his clothes and his third eye, even the villain is a cliché, but here everything feels more like a loving homage. The story itself is also anything but original, and even though it offers a few twists, they will not surprise fans of the genre. Nevertheless, there is a strange sense of familiarity and sympathy you have for this flick, because the movie comes closer to good wuxia fantasy than most modern and polished movies. 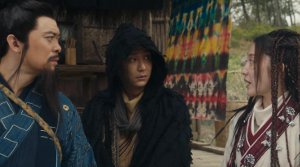 Louis Fan Siu-Wong ("The Legend is Born - Ip Man") is able to convince in his role as a master and manages to bring out the weaknesses and doubts of his character as well, so Zhang does not seem too out of touch with reality. However, the question remains as to why the movie revolves around Zhang, because the picture does not really deal with Daoism. At least, a Daoist master is probably an excellent fit to fight demons. The rest of the cast is also doing a good job, so, to be honest, the movie even has a higher standard than Hong Kong productions from the past in this respect. Only the humor that we get on rare occasions does not always manage to hit the mark. As mentioned before, the sets are very well done, and the variations of light and shadow as well as the fog make some of the special effects (even the CGI) look quite nice. A lot of things remain only half visible and this stimulates our imagination nicely. 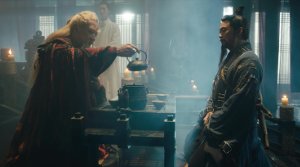 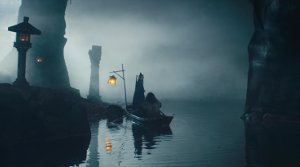 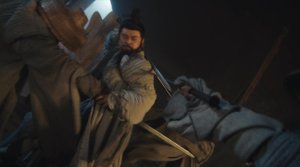 The fights in "Taoist Master" are very interesting. Often there are close-ups in which we get to see the hand or sword techniques in great detail, and at the same time, there are quick cuts, which create a certain dynamic too. Sometimes, the camera is vividly spinning around the area, but never in a way that would make you lose track of things. That's a great achievement. Basically, it all sounds pretty good and of course, fantasy/wuxia lovers have to be encouraged to watch this movie. Unfortunately, the fact still remains, that the story offers absolutely nothing new and that the characters were also written rather stereotypical. In addition, the development of the events basically follows the genre standard. In the end, you simply miss that certain special something. If you like the genre, you will have fun with this genre work and probably feel taken back to the 80/90s, but the flick will still not stick in your memory. For that, the story would have needed to be more gripping.