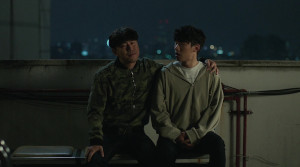 Story: Jung Joon-hyuk (Kim Sung-chul) has been applying for a job for years now but has not been successful yet. Therefore, he blogs a lot and offers his online help for all sorts of matters. His friend Choi Seong-min (Lee Si-eon) wants to become a policeman and has been learning for the entrance exam for a while, but he is not really making any progress. The two are treading water in life, when one day, a neighbor is suddenly found dead. It is a young girl who recently asked Joon-hyuk online to have a conversation with her. But since Joon-hyuk lives in the same building and he never revealed his true identity and did not want to make it public either, he denied her request for help. The girl committed suicide and for the police the case is therefore closed. But the blogger is stung with remorse, and so he tries to find out why the girl was suffering from depression. He finds out that a user named Ereshkigal wrote to the girl shortly before her death and asked her what the meaning of her life was. Joon-hyuk asks his friend Seong-min for help and together they go to the police. But the police claim that there is no murder case here. So, the two young men go to a private detective who owes them a favor. One of the employees is Noo-ri (Heo Gayoon), who is a wizard at the computer. She quickly finds out that the user Ereshkigal can be linked to several other suicides. The three continue to investigate and soon notice that somebody is tailing them... 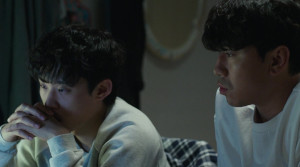 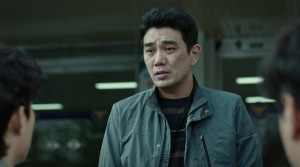 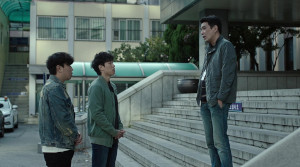 Review: When you get to know at the end of this movie that the story is actually based on the "Blue Whale Challenge" from Russia, during which several teenagers committed suicide because it was part of a "game", this feature certainly lends substance to the movie. But apart from that, there is hardly anything special happening in "Search Out". We have already seen all the aspects shown here in other movies, and in addition, South Korea has already dealt with the topic in dramas such as "Socialphobia". So, in this respect, it is certainly a good thing that we are also presented with a small detective story here, which makes for a nice change. But here, one of the movie's obvious weaknesses becomes apparent. The script hardly offers any clear-cut course for the hunt for the perpetrator, and the characters don't offer anything interesting either. This is why the movie simply just dribbles away most of the time, and stays far behind from what it could have been. 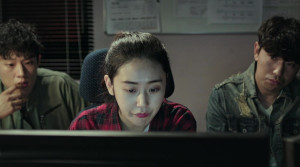 The mind game behind the enforced suicides could have been quite gripping, but we never actually delve deeper into the subject matter, instead the movie just presents us with established facts. Characters who have been emotionally stable so far suddenly become unstable, simply because the script needs them to, and apparently the characters being blackmailed with photos from their past etc. is reason enough for this to happen. The movie would have needed to do better here, especially if you want to engage the viewer emotionally in the events, or if you want to make the audience be interested in the characters. In addition, there are certain developments that are more than predictable, but are sold to us as big twists. Strictly speaking, there is not a lot happening at all. The social criticism - next to the pitfalls and abysses of social media - is also implemented in an awkward way. Our heroes are on the verge of becoming depressive because they can't find a job. At least that is what the movie indicates, but actually, they do not seem to have any serious problems at all. 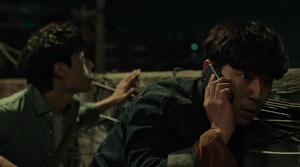 Kim Sung-cheol ("Sweet Home") plays the actual leading role, and his character's feelings of remorse are at least plausible, so his search for the reason behind the suicide seems understandable too. He also doesn't have that much to do. Same goes for Joon-hyuk's friend Seong-min. He is supposed to be the easygoing guy who constantly spits out jokes and therefore makes the movie a little bit more humorous and less bleak. But that often comes across quite fake. The relationship between the two young men and Noo-ri, however, is even worse, because the movie actually tries to create some kind of buddy feeling by showing some horsing around between the characters. But the individual characters are not written well enough for that. That's why at the end of the day, you feel like you've missed something concerning the character development. Furthermore, you have to ask yourself, why Noo-ri is so eager to solve the case? Here, too, the movie doesn't give us any answers. 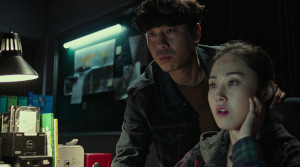 The search for the "murderer" also turns out rather lengthy, lest to say boring. Sometimes we just see Noo-ri clicking around while suspense-inducing music is playing in the background, then we get a few cuts showing surprised faces, and the whole thing starts right from the top again. This seems amateurish and unfortunately, the same goes for the directing job. On the one hand, the images are captured professionally enough so that you wouldn't think "Search Out" was a student film, and director Kwak Jung's debut work somehow even focused on a certain style that might go into the same direction as "Midnight Runners". But on the other hand, the pseudo-detectives do not actually come closer to the truth through clever investigation. And there are no action scenes to spice up the movie either. There are a few fights, but they take place off-screen, and once more, we only get to see the final result. You get the impression that the director didn't have the confidence to do action scenes. 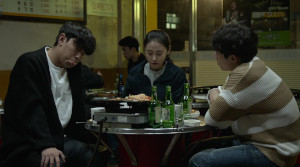 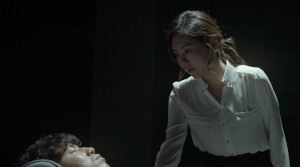 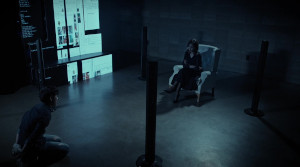 At least, "Search Out" is kept quite compact with its 92 minutes running time, and the basic premise along with a few developments - albeit predictable - somehow manage to make you keep watching. But above all, the thriller ultimately disappoints in terms of its unspectacular and superficial way of dealing with the subject matter. In addition, the characters are so flat and generic that they could have been replaced by any other character. The dark illumination of the scenes and some sets undoubtedly want to create the atmosphere of a thriller, but in the end, there is just not enough happening to pass as such. "Search Out" could do well as a remake, which should use a more experienced filmmaker, cast better actors (even though not everyone is acting badly here) and, above all, improve the script in numerous aspects. In its current form, however, you can ignore the movie with good conscience.