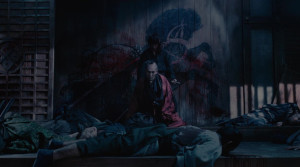 Story: Himura Kenshin (Takeru Satoh) is an extraordinary swordsman who joins the Choshu clan, led by Katsura Kogoro (Issey Takahashi), in order to overthrow the Tokugawa Shogunate and bring peace to the country. But this peace comes at a price. Kenshin is used as an assassin who eliminates political opponents. Even though Kenshin is greatly feared as a cold-blooded assassin and has already eliminated several people, killing still does not come easy to him. He knows how much guilt he carries, but he also knows that, using his sword, he has the power to change something in the country for the better. One day, during one of his assassinations, he gets injured in the face by an insignificant samurai. The man was by no means a good swordsman, but his will to live and his desire to make it to his upcoming marriage were remarkable. Once more, Kenshin has to deal with his inner demons, and it even gets worse when the woman Tomoe (Kasumi Arimura) turns up at the tavern he is staying in, as she witnesses one of his murders and starts appealing to his conscience. She herself seems grief-ridden and turns into someone who protects Kenshin from going completely mad. In the meantime, the Shinsengumi, the shogunate's police unit, are doing everything they can to eliminate the Choshu clan, especially Kenshin. Things don't look good for the rebels and Kenshin has to go into hiding with Tomoe for a while. Doing that, he experiences a completely different life. But he knows that he soon will have to go back to killing again... 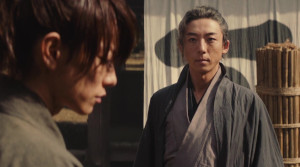 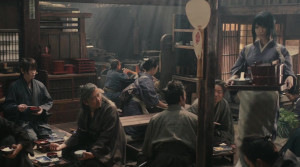 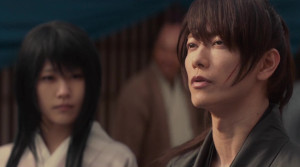 Review: If there's one thing you can't accuse the "Rurouni Kenshin" adaptations of doing, it's not sticking to the original material. Once more, we get Keishi Otomo behind the camera (for the fifth time already), and fans can put their minds at rest, as "The Beginning" focuses on the backstory of the assassin Kenshin in a powerful way. Anyone who is familiar with Nobuhiro Watsuki's manga, or who has seen the anime-OVA "Trust and Betrayal", knows that things are a bit quieter here than they are in the stories of the subsequent wanderer Kenshin. This is probably all the more irritating because you would certainly expect to see Kenshin slaughtering his way through crowds of people. And cleverly enough, that's exactly how the movie starts - in a way, to emphasize the contrast to the Kenshin of later movies -, but ultimately, the story is about the swordsman's fight against his inner demons and his looming madness. 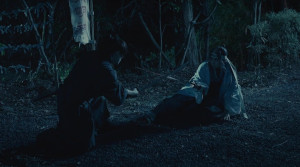 While there's hardly any blood in this series' other movies, which is also due to Kenshin's reverse-blade sword, we get a lot of blood in "The Beginning". You immediately feel reminded of earlier Chambara works, or the quieter samurai flick "Sword of Desperation" by Hideyuki Hirayama, and that also sets a nice tone, because this time, we hardly get any borrowings from the anime genre using colorful fighters with unusual fighting techniques, or quirky individuals who are also good for some laughs. No, instead, "The Beginning" is deadly serious and dramatic. After all, it is about a time when people were murdered in order to "restore peace", and Himura Kenshin is well-aware of what he is guilty. It is hard to believe that someone who is capable of emotionlessly soaking entire banquet tables with samurai blood, can still be so innocent at heart, and that killing never comes easy to him. But as much as this may contradict itself, the movie still manages to illustrate it quite nicely. Probably also because we have Kenshin's future character in mind. 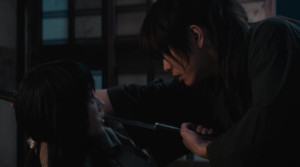 This time, however, events are developing much more slowly. In fact, the story always took its time to get going in the other movies too, but here, you shouldn't expect to be rewarded with an epic finale towards the end. The sword fights keep to the sidelines, which - and I'm not going to sugarcoat it - is a real pity. In the middle of the movie, we get a pretty respectable fight, but the finale doesn't even try to offer anything to action fans. While this is still disappointing, it also needs to be said that this was an extremely courageous decision which deserves some respect, as director Keishi Otomo clearly wanted to show that Kenshin lived in different worlds and that, even though he already was an extraordinary swordsman, he only learned his real, outstanding, and anime-like attacks in the years that followed. Therefore, the fights also feel a lot more real. There are no movements that would actually only be possible if the rules of physics didn't apply anymore. 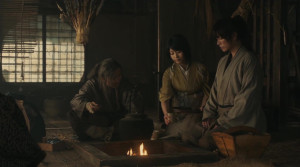 In the end, this movie is actually a quiet drama, in which Kenshin's love for a woman gives him the support he needs in order not to go completely insane. Because as a killing machine, this seems to be his fate. The love story develops slowly, and it takes the two protagonists' suffering as a basis. You don't get to see a smile on either Kenshin's or Tomoe's face. Of course, later it gets even more dramatic, and this is where the movie's biggest weakness becomes clear. Only a few fights, a more realistic world, a leisurely pacing, all this is not a problem, but since we are supposed to watch "The Beginning" after "The Final", you have to ask yourself, what surprises you are still supposed to get here? We have already seen Tomoe's story in a more compact and much more captivating form in the other movie of the series, but this version honestly drags on a bit. With its 138 minutes running time, the flick is not that short either. 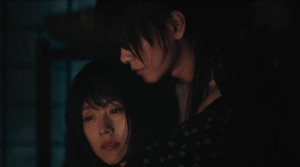 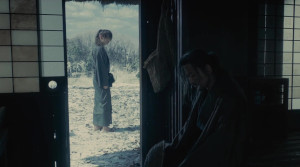 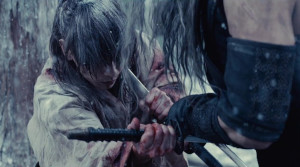 So, I can't bring myself to call "The Beginning" a completely successful piece of work. While we have already seen Tomoe in a flashback in the series' first part "Rurouni Kenshin", and even though the latest movie comes full circle quite nicely by creating a transition to the first part with its last scene, a lot of this storyline feels like it has already been told. What's left then, is the focus on Kenshin's suffering and his complex emotions that threaten to tear him apart from the inside, as well as motives such as revenge, forgiveness, and love. "The Beginning" does not seem like a manga adaptation, instead it feels like a drama that examines the life of a swordsman who, in a challenging time shaped by death and war, tries to achieve the right thing with the means at his disposal, while also trying not to become a monster. This is a bitter subject which could be depressing if it weren't for the hopeful silver lining on the horizon, and the certainty that, later on, Kenshin will atone for his sins. And with that, however, the essence of the original material was once more captured successfully.