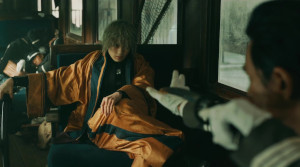 Story: The police arrest the man who was responsible for Shishio Makoto getting possession of a warship, which he then used to tyrannize Kyoto. His name is Yukishiro Enishi (Mackenyu Arata), and he has connections to the Chinese mafia. When he is arrested, he asks about Himura Kenshin (Takeru Satoh) and whether his scar has healed by now, as they have a history together. Because of an agreement between the two countries, the Chinese government takes charge of Enishi, and so he is soon at large again. Now he plans his revenge on Kenshin for killing his sister Tomoe. Tomoe had been Kenshin's girlfriend, and Enishi has a group of people around him who also want to take revenge on Kenshin. In addition, Enishi wants to make every friend of the wandering swordsman suffer too. And in doing so he also doesnt shy away from razing Kyoto to the ground, especially since he has promised a Chinese millionaire, who supports him financially, to leave the city to him after he is done with his vendetta. After Kenshin meets Enishi, who then introduces himself for the first time, old demons return. Kenshin has to give Kaoru (Emi Takei) and his friends an insight into his bloody past, and he has to find a way to eliminate Enishi. But he swore off killing twelve years ago. Among other things, he promised this to Tomoe, because he wants to make amends for his deeds, but what chance does he have against Enishi like this? 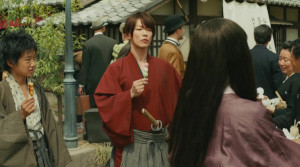 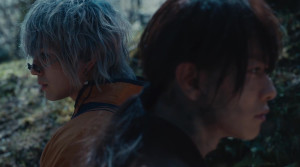 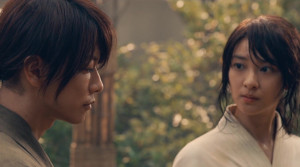 Review: There was a lot of buzz when the news came out that, after the Kenshin trilogy and its bombastic conclusion with "Rurouni Kenshin: The Legend Ends", there would be a sequel including the last storyline, the anime did not adapt yet. But then there was the scandal around Nobuhiro Watsuki, the creator of the original material, whose pedophile tendencies were revealed through DVDs found at his place. And the question came up whether, since he is certainly somehow getting his share of the movie's profit, he should be boycotted. But this would also punish the talents involved in the movie (plus this would mean that other rather big artists like Goethe should not be read anymore either...), and it once more brought up the well-known debate about separating work and author from one another. A difficult topic that doesn't really belong here, but we live in a (completely bonkers, if I may say so,) society in which NOT mentioning this circumstance apparently already is a statement, something I had to notice with other reviews. Now that I mentioned that I am only interested in the movie and the fantastic world around Rurouni Kenshin, while everyone else can and should act as they see fit and the whole thing certainly deserves to be discussed (but there is simply no further room for it here), we can finally get down to the nitty-gritty. And that is: "The Final" is a great continuation of the series! 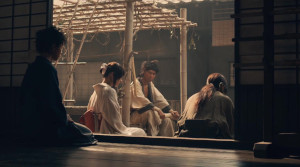 It would actually be wrong to call it the end of the series, because in Japan "The Beginning" has already come out, even though it is a prequel about Kenshin and his time as a killer or rather his transition as he eventually became the wanderer. The focus here is the story of Tomoe, to whom Kenshin owes his x-shaped scar. But in "The Final", this is also a central theme, because Tomoe's brother wants revenge. The storyline from the manga has been shortened and changed a lot, but important elements are still there, as well as some fan service, so you can say that you get the best possible adaptation. Although, strictly speaking, there is cause for a lot of criticism, which Ill better address immediately. For instance, with its almost 140 minutes of running time, the movie isn't exactly short, but at the beginning the events drag on a bit. Nevertheless, this time isn't really used to put the characters in the foreground, apart from Kenshin and Kaoru maybe, which is a pity. 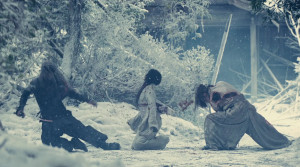 Nevertheless, we get to see all the familiar faces again. But if you don't already know them from the trilogy - which may be difficult because "The Final" is on Netflix but in most regions the three predecessors are not(!) -, the characters just seem like blank pages. Especially when it comes to Sanosuke, which is a little frustrating. Through their fights Aoshi and Misao almost get more depth than Kenshin's circle of closer friends. Unfortunately, Kaorus character also stays a bit flat, which is not smart from the script, because, as in the other movies, she is part of the subtle love story, which now, being confronted with Kenshin's past and his love for Tomoe, reaches a more mature level. "The Final" begins at a rather leisurely pace, but towards the end it builds up to an incredible action spectacle that is second to none and sweeps away all previous points of criticism. But the reason for the movies success is also that during the action we are also faced with tragedy, anger, despair, loss and the fact that both hero and villain are unsure or even misguided when it comes to the question of how they should deal with their inner demons. 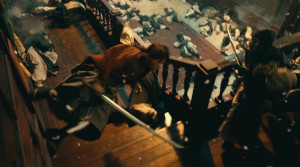 Thus, you are often watching with a tear in the eye, but most of the time, you simply have to stare at the screen slack-jawed. Choreographer Kenji Tanigaki once more outdid himself. And here I really don't know where to start. Probably with the tempo, or rather the rhythm. At first, there are already a few impressive scenes, but towards the end, the fights pick up the momentum even more, and a ton of creativity gets thrown into the mix. For example, the anime style is reflected in the furniture being destroyed in a wonderful way, the sets are fantastic and always stand out because they seem specifically designed to make the fights look even more spectacular, while some sets even get destroyed completely. At the same time, the fights don't seem totally unrealistic, the foundation is real swordsmanship and the actors, especially lead actor Takeru Satoh, absolutely go to their limits, for which you can't respect them enough. But then there are also some original techniques and camera angles which almost make it hard to believe that the filmmakers were actually able to capture these scenes so perfectly. 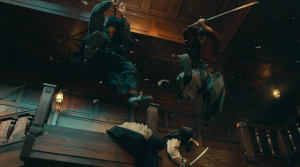 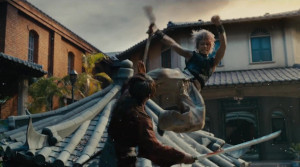 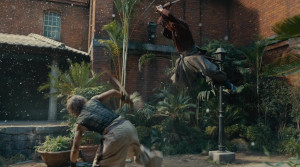 In addition, there are no apparent CGI tricks used here either. Wood is really splintering, parts of the city are actually collapsing, and ropes support the movements of the fighters in an extremely unobtrusive way, while everything somehow always seems smooth and organic. During the fights you get the feeling of being carried away by the flow of a piece of music, and this is particularly noticeable when there is no music accompanying the action during the encounter between Enishi, played by Sonny Chiba's son, and Kenshin (one of those subtle but ingenious means to produce some variety). And when Seta Sojiro fights with Kenshin and the two are almost completely in sync in respect to their movements (which is proof of how much Sojiro's fighting style actually resembles Kenshin's Hiten Mitsurugi style), the heart of every fan and martial arts enthusiast will certainly jump for joy. For the action alone, the movie deserves to be seen more than just once  thats how much work has been put into it. But as I said before, there is also something for the heart, and the tragedy of the main character always leads you to feelings that are surprisingly close to depression. The feeling of living in a world you don't belong to anymore, and yet somehow having to get by, has always been one of the central motifs of the series. With Kenshin's past around Tomoe, the love story with Kaoru has now been brought to a conclusion, while at the same time paving the way for the prequel. Brilliant.