On Your Wedding Day 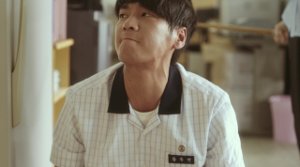 Story: Hwang Woo-yeon (Kim Young-kwang) is a troublemaker at his school, constantly fighting with his fellow students. But he is actually just defending himself against their bullying attempts. One day, as he is once again reprimanded by his teacher, transfer student Hwan Seung-hee (Park Bo-young) enters the room. He immediately wants to know more about her, but he isn't the only one. In fact, everyone wants to go out with the new girl and thanks to his tenacity and luck Woo-yeon gets the chance to get closer to Seung-hee. But all in all she is still keeping him at a distance. He manages to convince her, however, that the others wouldn't annoy her by asking her out anymore, if she pretended to date him. He also promises not to get into any fights anymore. She agrees to the deal. Shortly thereafter, she is absent from school, though, and when he visits her he gets to know about her father getting aggressive when he is drunk. She calls Woo-yeon a few days later and tells him that she and her mother have left home. A few years pass and Woo-yeon is getting by as a part-timer. He has no direction in life. But when a friend shows him the brochure of a university in Seoul and Woo-yeon recognizes Seung-hee in one of the pictures, he does everything in his power to pass the entrance exam. He learns day and night and eventually manages to be accepted at the university in Seoul. He actually meets Seung-hee again, but it's not the heartfelt reunion he hoped for. Particularly since she has a new boyfriend... 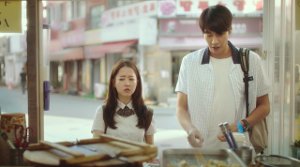 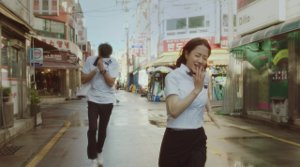 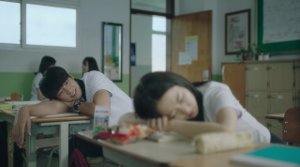 Review: After having read several positive reviews I actually became curious about this rom-com with the rather uninspired title "On Your Wedding Day". "Please, everything but a wedding ceremony being crashed by the protagonist", was my only thought all the time. But had the movie been that cliché-ridden it surely wouldn't have won over critics. Still, after the initial first minutes you actually start to become cautious. A "cute" love story unfolds, which in fact would even be too cute if there wasn't some pretty neat humor mixed in. There may be a likeable protagonist, but that alone isn't enough to make the movie stand out from all the tedious mainstream releases in the genre. But then, after a while, it turns out that the movie doesn't simply stick with the timeline of Woo-yeon's youth. The movie spans more than a decade and in fact revolves around growing up and the pain that goes along with experiencing first love. The more the story progresses, the more interesting it gets. 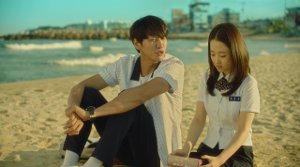 In the beginning a problem becomes obvious, though, which runs through the movie until the very end. Woo-yeon is supposed to be drawn as a character which definitely has its flaws and is full of fears concerning the future. However, all in all you can only have pity with him. In order to win over Seung-hee he does a lot, to be more precisely he ties his whole life to hers. Yet, she never considers having him as a boyfriend, but rather jests with him as if he were a good buddy. At some point it becomes clear even to her what feelings he has for her, but it doesn't seem to be of concern to her not to hurt him. Instead, she thoughtlessly plays with his feelings. Maybe that's only the perspective of a male viewer and surely personal experience might also be involved in how you interpret the relationship, but Seung-hee oftentimes seems cruel. Luckily, this doesn't mean that she is a bad human being in general, and most importantly the chemistry between the two protagonists is great. 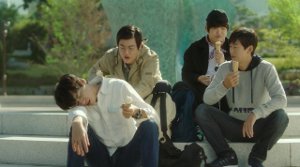 Granted, the aforementioned may not be completely true. Seung-hee is actually showing quite explicitly during some scenes that she has no interest in Woo-yeon. But that's even stranger since all men around her are worse of a choice than her friend from school. Naturally, she still chooses one and none of the men seems to be as honest and interested in Seung-hee as a person like Woo-yeon is. What's fascinating is that she is intitially Woo-yeon's first love. Even after things don't turn out well for him, there is still the magic of his first love surrounding Seung-hee years later, which no other woman can compare to. What we have here is the romanticization of love. An illusion you can't fight and which put Woo-yeon completely under its spell. What makes "On Your Wedding Day" work out so well is the development of the relationship or rather of the characters since the movie spans four timelines and thus has an epic scale to it. 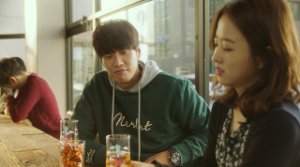 Strictly speaking, there is only one time Woo-yeon makes a serious mistake, but it could also be the result of his fear to lose Seung-hee as she tells him, as if it were not a big deal, that she is going abroad for a few years. His disappointment is written all over his face. Kim Young-kwang delivers a well-done performance as a young man whose world revolves around a single woman and who yet isn't simply naive in his way of thinking. Park Bo-young ("A Werewolf Boy") plays a woman who at times seems gruesomely cold or emotionally distant, but she clearly has the more complex and interesting role to play and does it skillfully. I may not have been able to fully become fond of Seung-hee, but the chemistry between the two actors is just right and the scenes between them are always authentic, which speaks for the good acting. Especially since you can really make out changes in the characters. 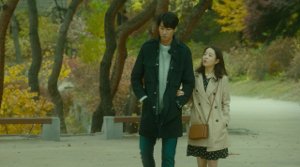 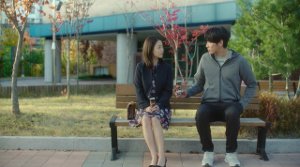 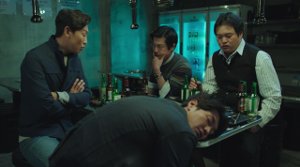 On its own none of the four stories of the different timelines is very original, but it's all in the mix. The characters grow (only their haircuts oddly remain the same) and the supporting characters, which are Woo-yeon's friends, also all have their pecularities and are well-written. This is where the strong focus on Woo-yeon becomes apparent once more since we don't get to see anything from Seung-hee's perspective and also don't know anything about her friends. That's kind of unfortunate. The - as not to be expected otherwise - drama kicking in every now and then is loosened up by jokes which are sometimes lost in translation since they are wordplays or are of the kind that require certain cultural knowledge. Director Lee Seok-geun (he has already worked on "The Outlaws") succeeds in delivering a movie with his debut work that doesn't want to force some tears, but puts growing up in the context of first love in the foreground. A bittersweet note is therefore running through "On Your Wedding Day", which makes the movie surprisingly mature.