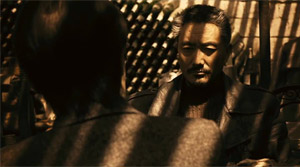 Story: Pan Xiao (Xu Zheng) is one of the best attorneys in China. His newest case revolves around a poacher (Duo Bujie) who ran over a police officer. Pan wins the case and the poacher gets free. However, since the poacher can't pay the lawyer right away the attorney takes the poacher's car by way of pledge. After that one mishap follows the next for Pan Xiao. In one of the most remote areas of the coutry he picks a quarrel with a bunch of truck drivers who destroy his windshield. Therefore, he doesn't see the right hand man (Huang Bo) of the poacher trying to stop his car by pretending to have a flat tire. Accordingly, he runs him over. In fact, without knowing it Pan drives around a rare falcon which the poacher couldn't take from the car before he gave it away. Now, the attorney has serious problems. He decides to get rid of the body by burning it somewhere which is why he stops at an odd rest house. There he makes the acquaintance of the prostitute Li Yuxin (Yu Nan) who wants to accompany him. For obvious reasons he can't comply with her request, but she doesn't give up so easily. At the same time, the poacher he saved from going to prison is hot on his trail... 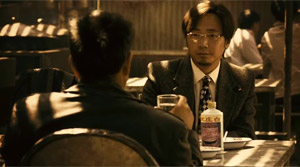 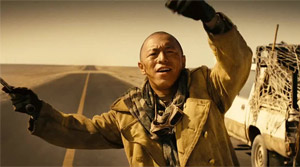 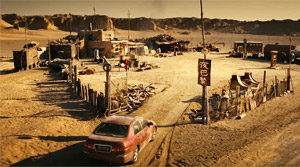 Review: The style of this dark neo-western meets road movie seems familiar at times and yet there is something genuinely Chinese about it. There are little moments during which we actually assume "No Man's Land" to be an art house flick - the incredibly beautiful landscape shots of the desert, to name just one example - but the dark humor and the strong entertainment value also make you realize that the film is influenced by Hollywood or rather the works of the Coen brothers. Still, there is a lot of social criticism hiding in the story. Consequently, there isn't a single character that isn't flawed and stands as one of the problems of modern China. Injustice, money that rules everything, prostitution, exploitation and last but not least poaching. Yes, ultimately, the movie draws the line between human and animal very thin until it almost fades away completely. 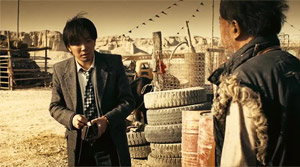 So it doesn't come as a surprise that "No Man's Land" had substantial problems to get past the Chinese censor board. The movie was already completed in 2009, but only four years later, and after director Ning Hao cut the film not just once, it was waved through. Why it was, actually, is quite incomprehensible since the criticism on Chinese society is very clear. Apparently, it was enough that the police, and thereby the government, isn't depicted as completely incompetent. There isn't much to see of the police anymore, which is why you wonder how the original version of the movie might have looked like. Furthermore, the epilogue feels like a forced appendix, probably in order to put the censor board into a more conciliatory mood. In fact, this is bothersome and it would be great to see a "Director's Cut" one day, if there actually is one coming out maybe (certainly not in China), but this doesn't change the fact that Ning Hao managed to deliver a small gem. 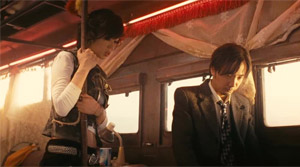 The story's centre revolves around a protagonist that you hardly can sympathize with since he twists the law as he pleases and is solely looking for fame and fortune. Yet, there is a point in the story when you start to have sympathy with him since he is apparently dogged by bad luck. Every now and then there is a glimpse of him not being a bad guy after all, but he still remains a coward who doesn't face problems or dangers and instead runs away from them. But because of this things only get worse for him. The developments in this dark western-thriller are very nicely woven together so that it's just fun to watch how coincidences presuppose one another. Moreover, there is also created well working black humor this way which lightens up the story and yet doesn't stand in contrast to the ruthlessness shown at times. 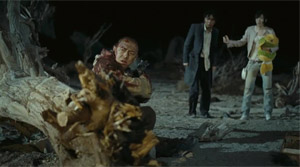 The weird characters are also enormously entertaining. Xu Zheng ("Lost in Thailand") plays the questionable hero quite convincingly, but he doesn't grow that much as an individual. Yu Nan (who already made it to Hollywood for "The Expandables 2") manages to deliver a more multilayered performance. Concerning the villains Huang Bo ("Dearest", "Cow") is once again stealing the spotlight, although Duo Bujie depicts a fantastically cold-blooded and unpredictable individual. He already could be seen in "Kekexili: Mountain Patrol" which "No Man's Land" reminded me of in a different aspect as well. It contains almost as breathtakingly beautiful landscape shots of a desert. Cinematographer Du Jie hits you with all the visual power of his widescreen shots and brings the Gobi Desert to live as an additional actor. 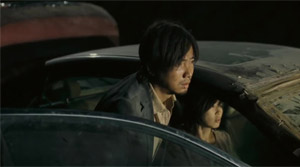 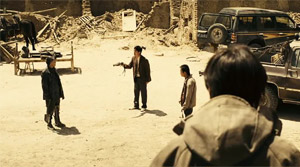 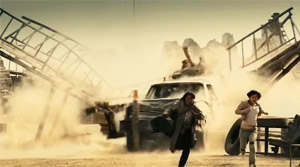 On a technical level the film also convinces with its fantastic, dusty sets and dirt-covered costumes. Adding to the western atmosphere of this thriller is a very well achieved score. And the great thing is that "No Man's Land" often reminds you of a western, although director Ning Hao doesn't desperately try to make it one! Everything feels natural and the screenplay, despite six (!) writers involved, is coherent and smart! The social criticism is nicely integrated and constant new twists keep the suspense level up. That "No Man's Land" still manages to keep up such a great pacing despite the many revisions forced upon it is truely amazing. Even the epilogue, which doesn't really fit in, and the fact that you can't be emotionally involved a hundred percent by the severally flawed characters doesn't change the fact that "No Man's Land" is one of the best films coming out of China in recent years - in respect to its entertainment value as well as its message.