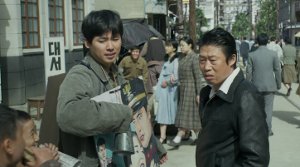 Story: It is the year 1941 and Korea has been occupied by Japan for decades. By that time, people are no longer allowed to speak Korean at school and students have to change their names to Japanese ones. The Korean language is in danger of dying out, so Ryu Jeong-hwan (Yoon Kye-sang) from the Korean Language Society is working with a small team on a Korean dictionary to preserve the country's identity. The team has been working on this for ten years, but one day someone steals a bag with pages of the dictionary from Ryu. Kim Pan-su (Yoo Hae-jin), who has just lost his job, is the thief. He seems to have no choice but to consider every possible way to get money. His son needs tuition fees and he also has to raise his young daughter alone. Ryu eventually gets the bag back, but as chance would have it, there is also someone whose life Pan-su once saved in the team of academics working on the dictionary. Because the group needs someone to do various errands, they want to hire him, but Ryu is strongly against it. Eventually, Pan-su becomes part of the team, though, and he has to realize that for his job it would make sense to be able to read and write. While the team has great difficulty collecting words from the country's many dialects, the Japanese have kept tabs on the group for a while now, making it almost impossible for them to work. However, Pan-su unexpectedly proves to be a great help in collecting dialects. 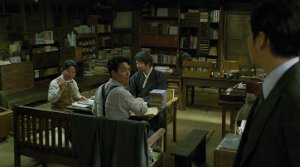 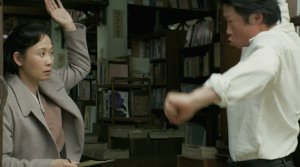 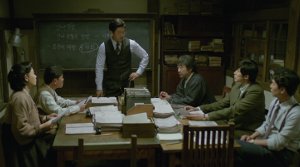 Review: The story of this movie may at first seem as if it hardly needs to be taken seriously. It seems to be a comedy taking place in the days of Korea's occupation by the Japanese. The interesting thing is that you immediately think of movies like "Assassination", which also show Koreans selling their own country and culture to Japan. In "Mal-Mo-E", however, this happens on a smaller-scale, because it is "just" about their language. Nevertheless, during the movie director Eom Yoo-na is able to wonderfully work out what linguists and ethnologists have already known for a long time: language reflects our culture and without it we lose a large part of our identity. Since the movie never fails to stress this circumstance - sometimes it gets a little too much - the story gets much bigger and we realize that the academics are actually heroes of their time. 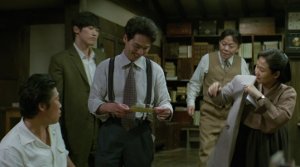 This leads to another interesting aspect of the movie. Who is actually the story's hero? On an emotional level, Pan-su stays the pivotal point of events. Yoo Hae-jin ("Confidential Assignment") normally always plays the funny supporting roles, which, of course, is also due to his unusual facial features. But this time he is allowed to bring humorous elements to the movie without having to rely on cheap slapstick. Next to him there is Yoon Kye-sang ("The Outlaws"), who embodies an academic with irrefutable ideals. But he is also just one member of the group of linguists, who can all be considered heroes. Because they risk everything to preserve their mother tongue. The movie also gives the supporting characters some time on screen, so that they don't just come across as filler material. In the end, however, you actually would have liked to know even more about them. 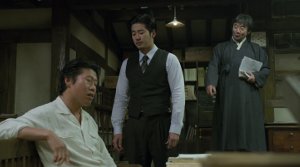 "Mal-Mo-E" is by no means a short drama. Despite its 135 minutes running time, it never seems lengthy, though. On the contrary, the movie has an exceptionally high pacing, although it revolves around something "boring" like gathering words and their meanings. This achievement is due to female director and screenwriter Eom Yoo-na, who has already written the screenplay for "A Taxi Driver", which called a lot of attention to her. The people and fates of her story give off a certain warmth, and the academics, as well as Pan-su and his friends, who keep their heads above water with the occasional job, manage to paint a picture of a family which is there for each other. In the end, the academics benefit from Pan-sus's street smarts and his former cellmates from the many times he was in jail. And thanks to Ryu, Pan-su finally learns how to read and write, which opens up a whole new world for him. 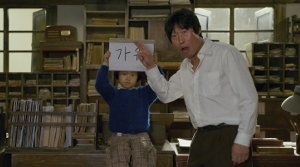 The importance of community within Korean culture is also reflected in the etymology of some of the words and phrases mentioned in the movie. Things that Pan-su has unconsciously felt, but perhaps not even realized, now become clear to him and he starts to understand how much power and identity language gives to people. As you might have expected, some sacrifices have to be made during the hopeless fight against the Japanese occupiers, and even if some sacrifices are anything but small, the movie does not turn into a cheesy tearjerker drama. This is really praiseworthy, especially because there still are some emotional scenes. You will probably be moved at the latest, when you realize that the story is based on true events. During the credits someone even browses through the real pages of the first dictionary for us, a dictionary which is largely responsible for the fact that huge parts of the Korean language haven't gotten lost. This is quite touching and shows you the actual, unexpected greatness of this war of independence. 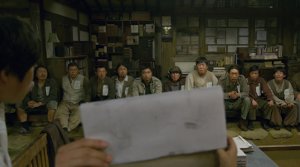 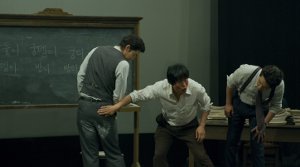 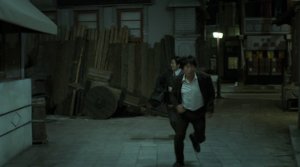 Other positive aspects that need to be mentioned are the great sets. We soon feel as much at home at the academics' secret shelter as we do on the dusty streets that we repeatedly visit on the way to the cinema where Pan-su occasionally works. The attention to detail, even for the costumes, leaves no doubt that everybody involved wanted to do their best. The only bad thing you could say about "Mal-Mo-E" might be that its ending uses certain genre formulas and it doesn't seem quite as flawless as the rest of the movie. Above all, however, the movie impressively shows that even small independence movements can mature into something big, and that they can have enormous effects on a country. When all is said and done, the movie will certainly make some of us value language a little more.