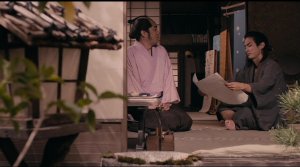 Story: It's the last days of the Edo period and the country is in a state of chaos. The shogun's men pursue rebels in the country who want to see the emperor in power. Tajuro Kiyokawa (Kengo Kora) once belonged to the Choshu domain and now his old comrades ask him to help them with their plan of overthrowing the regime because he is an extraordinary swordsman. However, Tajuro is not interested in the world's issues anymore. He is painting and occasionally gets drunk in a tavern. The tavern's owner Otoyo (Mikako Tabe) has cast an eye on him, but the former samurai is not aware of this. One day, he finds out that his brother has joined the rebels. After a good friend of his brother was killed by the government, he comes to Tajuro and blames him. With that he also sets the shogun's men on Tajuro's track and the samurai has to defend himself. Because he manages to kill quite a few men during his defense, it becomes clear that they underestimated the former samurai. A hunt for Tajuro begins, which is all the more problematic as now he not only has to watch over his brother, but he also has to protect Otoyo. Tajuro's art of sword fighting might be extraordinary, but can he really stand his ground against an entire army? In the end, he has no other choice but to find out... 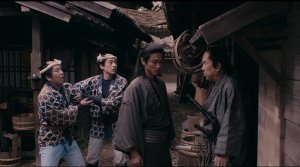 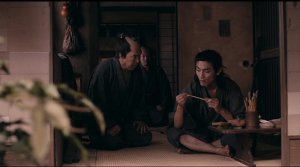 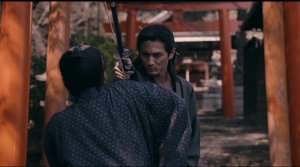 Review: You inevitably have to approach a movie with a certain kind of respect if it was shot by a director, whose last movie came out forty years ago, but some expectations arise as well. With his almost 85 years of age, however, Sadao Nakajima should have the necessary know-how to put a proper Jidai-geki movie (a period movie with borrowings from Noh and kabuki theater) on screen. As a matter of fact, "Love's Twisting Path" turns out to be a little journey through time. This includes positive aspects like the love for authentic sets and costumes and a skillful arc of suspense during the sword fights as well as negative aspects like the overacting. In the end, the movie disappoints mostly because, despite its running time of just 93 minutes, it turns out to be pretty tedious. This is mostly due to the fact that the script stays too long in individual scenes. 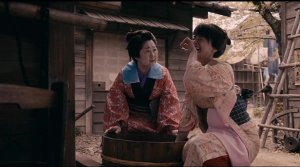 Typical for the director, the movie's title is rather strange and already reveals the movie's core. Nevertheless, this is also a point of criticism. The love story doesn't actually feel like the drama's center. To be honest, most of the time, we are not even interested in the love story all that much. And when this plotline actually surfaces, it's pretty fleeting and the characters are genuinely not written for that kind of story. Tajuro, played by Kengo Kora ("Fish Story"), is a former samurai who hardly shows any remains of his glorious warrior class. He doesn't keep any promises and wastes his money on alcohol. With that, director Sadao Nakajima chooses a pretty modern approach and the samurai are demystified (like in "Killing"). This makes Tajuro quite interesting as a character and it also turns him into an anti-hero as he gets sucked into exactly those kinds of political conflicts that he so adamantly tried to get away from. 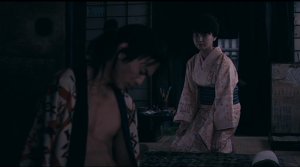 However, the director could have done more with his character and his stoic nature. At least Otoyo, portrayed by Mikako Tabe ("Midnight Diner"), does not just embody the typical love interest, but instead plays a woman with her individual desires. Nevertheless, you cannot really take the characters seriously when it comes to the romantic part of the story. This is probably where the director's age makes itself noticeable, because during the romantic scenes the already constantly present over-the-top acting comes to the fore even more. Maybe, Sadao Nakajima wanted to emphasize the genres theatrical roots with that, but everything just seems too wooden and stiff, and as already stated, excessively emotional as well. Therefore, you cannot take the love story seriously, which is especially unfavorable because the movie actually wants to put its focus there. In fact, the political power struggle of the time is what comes into the limelight towards the movie's end. 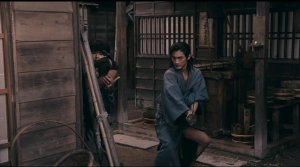 After Tajuro unsuccessfully tried to run from his past, he is hunted during the second half of the movie. Now you could assume that at this point the pacing increases. However, this is just the case to a certain degree. There are chasing scenes and sword fights, but they mostly consist of waiting, which is mainly caused by the static camera which stays in scenes too long while we see the pursuers storm through houses. In those moments we can marvel at the wonderful sets of Kyoto and its traditional houses. Moreover, we get to see the movie's deadpan humor in these and many other scenes and it generally comes along pretty unexpectedly. Besides the chasing scenes, there are also numerous sword fights. However, you should not expect that much refinement here. Instead it gets pretty wild and a mixture of tactical retreat and renewed attack dominates the battlefield. This is actually pretty disappointing. 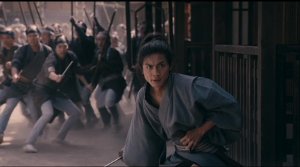 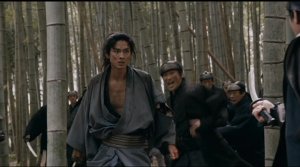 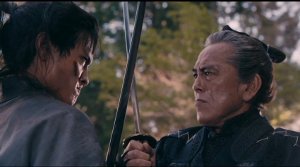 The disappointment also stems from the fact that while the action scenes first build up suspense quite nicely, they are then not supported by extraordinary sword fighting. This does not mean that the actors look as if they couldn't wield a sword, not at all. The movie simply lacks a good choreography, even if this was most likely intended so that the fights look as authentic as possible. By the way, the movie is accompanied by a beautiful soundtrack which combines traditional pieces with a modern score as well as winds which are kind of reminiscent of western music. Next to that, the movie's ending also deserves some mentioning because it is unusual, but also somehow appealing. The biggest problem with the movies, however, is the fact that "Love's Twisting Path" is pretty unspectacular in many ways. This starts with the story and the way in which love is portrayed and continues throughout the action. Therefore, this movie comes around as a fossil of a yesteryear, but cannot even manage to awaken feelings of nostalgia.