Kundo: Age of the Rampant

Story: Dolmuchi (Ha Jeong-woo) is a butcher and therefore struggles to survive every day. One day he is ordered by the local ruler Jo Yoon (Kang Dong-won) to kill a woman. However, it turns out that the woman is pregnant and Dolmuchi can't commit the cruel murder because of his conscience. As punishment the ruler orders Dolmuch's family to be killed. The butcher himself survives and is seeking revenge, but he doesn't stand a chance against Jo Yoon's extraordinary skills with the sword. Just moments before he is about to be decapitated Dolmuchi is rescued by a monk (Lee Kyeong-yeong), one of the leaders of the Kundo, a bandit organisation that is having their hideout in the mountains. This group steals from the rich and gives the poor. Especially the farmers get poorer and poorer under Jo Yoon's relentless rulership. Dolmuchi's bandit name is henceforth Dochi and together with the bandits he protects the woman the ruler wants to see dead. After all she is the wife of Jo Yoon's half-brother and if she would give birth to a son he would have the right to continue the family lineage and not Jo Yoon. It is time for the Kundo to dethrone the cruel ruler.

Review: Period movies taking place during the Joseon dynasty always have the problem that they are too drama-heavy or simply bore you with uninteresting characters and intrigues. "Kundo" on the other hand is an action-loaden spectacle in which old and new are mixed. A mix that is garnered with a good amount of humor. That the movie's overall tone is still gritty and at times even gruesome yet not making the end product seem odd, is more than anything else thanks to the direction of Yoon Jong-bin, a good screenplay and many talented actors. The movie proves at any time to have a great sense for aesthetics and even has some pretty impressive fight scenes in store. Accordingly, it shouldn't surprise that the picture was a big success at the Korean box-office. 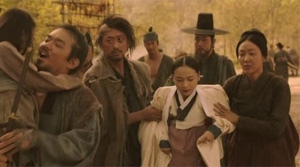 If there is a downer it is the soundtrack as it is quite odd. The main theme is from "Days of Anger" which was also used recently in Tarantino's "Django Unchained". It is actually pretty irritating to get a western soundtrack here, although it does sound very nice and also features some classic movie score. Then again there are in fact some western elements to be found in the movie. But you can tell that the director was influenced by Akira Kurosawa's "The Seven Samurai" or the Chinese wuxia genre as well. In the end that's not really bad, because as already stated the result is really quite impressive. Thus, it once again turns out to be true what critics say sometimes: It's better to copy well than not to do it right on your own. 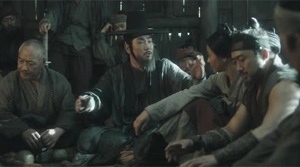 However, that's not fair towards the screenplay because there is quite a lot of effort to make out in it concerning the elaboration of the characters. This even become obvious in the fact that a lot of individuals are introduced who we really can relate to in some way or another. In its core the plot revolving around the Kundo, a Robin Hood-like organisation that actually existed in Korea, can be broken down to a simple story of Dochi seeking revenge on Jo Yoon, though. Dochi is played by Ha Jeong-woo ("The Berlin File", "The Terror Live") while his opponent is embodied by Kang Dong-won ("Secret Reunion", "Maundy Thursday"). Particularly latter one makes quite an impression, because of his juvenile and fragile looks making him the perfect villain who brings across cold emotions very well.

The movie's hero is the butcher, though, who isn't exactly the sharpest tool in the box. However, the two share that they both rebel against a fate that has been forced up them by the heavens. Particularly Jo Yoon depicts a subtle deepness of character that is unusual for a period flick focused on action. The supporting cast also consists of charismatic actors. Lee Kyeong-yeong ("National Security") isn't playing the villain, but a monk for a change, Ma Dong-seok ("The Five") is also getting a lot out of his role as does Jo Jin-woong ("A Hard Day") who can be seen in a nice role. The actors all manage to give their characters the necessary color to help the movie conceal an introduction too long for its own good. Before you know it you realize that the introduction still isn't over after half the movie's running time. With its 138 minutes the movie certainly is in need of some editing. 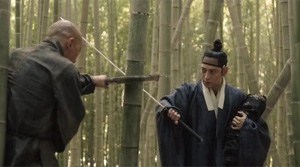 Director Yoon Jong-bin ("Nameless Gangster") is doing an entirely convincing job, though. His pictures are very well composed and especially the sets are a feast for the eye so that more than anyone else wuxia fans will find themselves in paradise. Wide green landscapes, bamboo forests and dark, misty valleys are as enchanting as are the well decorated interior sets and costumes. The camera work is neat, too. Some extra kudos go to the fights, which - as is instantly recognizable - are choreographed by Jung Doo-hong ("Fighter in the Wind") and deliver a very strong elegance and a great pacing. Surprisingly, the film's humor doesn't stand in the way of the otherwise serious and at times even dark tone of the movie and thus "Kundo" just would have needed a tighter editing in order to be more well-rounded. Yet, "Kundo" remains still one of the very few really convincing action fests that play during the Joseon dynasty.