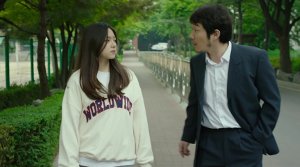 Story: Chae-yeong (Jung Daeun) transfers to a new school because she got into a fight with some boys at the old one. Before she even had her first day at the new school, she already gets into another fight, though. Some guys bully the student Jong-goo (Oh Seung-hoon) because he doesn't want to let them copy off his results during the next test. Jong-goo has a huge sense of justice, but he can't defend himself against the boys. So, Chae-yeong steps in. The students have no chance against the girl, as she has been learning karate from her father (Jung Eui-wook) since she was a little girl. When it turns out that Chae-yeong is in the same class as Jong-goo, the boy immediately asks her how he can become as strong as her. She actually wants to get rid of him as quickly as possible, but he doesn't give up and so she introduces him to her father, whose dojo he then joins. In the meantime, there is a crisis at school, as the student president Jin-hyeok (Kim Tae-yoon) wants to be recruited by a gang. His friend Hae-seong (Son Woo-hyun) is less than thrilled about it. He used to bully students too, but he actually wants to leave these days behind him and, more importantly, he doesn't want to have anything to do with gangs. Of course, Chae-yeong gets mixed up into the whole affair, but she always knows how to easily fight herself out of difficult situations. When Hae-seong sees her for the first time, he immediately wants to get to know her and decides to join the dojo as well. So, he, the somehow emotionally distant looking girl and Jong-goo get closer over time, but the situation at school doesn't get better... 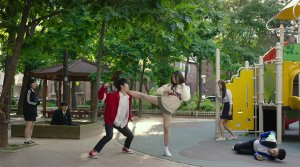 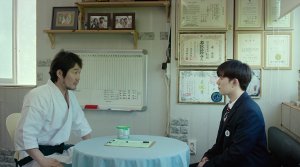 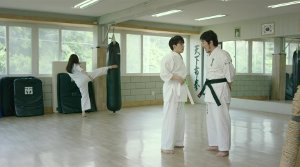 Review: The title "Justice High" sounds like we might get a teenage action comedy which most likely turns out a little over-the-top. As a result, the movie might already lose some viewers because of its title. However, the original title translates to "Karate". Admittedly, that doesn't quite fit either, as the movie is not a martial arts flick, but a comedy about friendship. Karate serves as a link between the three ill-fitted teenagers. What quickly becomes clear - also due to oftentimes rather shaky camera work - is the fact that "Justice High" was not blessed with an extraordinarily high budget. Therefore, the movie tries to focus on its strengths, namely, the characters' chemistry. The story itself is not particularly original, it deals with a gang of gangsters which wants to expand its influence within the school. This way, the movie tries to build up a minimum level of suspense. 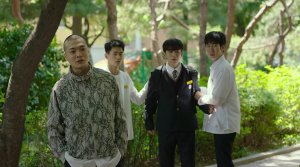 However, the gangster story in particular seems almost misplaced. We already know that Korean gangs are recruiting their new members at schools, and clique formation, which focuses on the protection of the school itself, is also nothing new in Korean cinema (an example for some of these topics would be "Spirit of Jeet Kune Do", a movie that can almost be called a classic), but somehow this story aspect is often portrayed rather clumsily. During these more serious moments, we all too often want to go back to Chae-yeong and the two guys who both try to get to know the girl in their own way. Of course, we might also assume that we get a big love story in a movie that seems to be targeting a young audience. But in fact, this is not the case. Admittedly, Hae-seong finally gets out of "gangster life", because he is immediately interested in Chae-yeong, but to be honest, he was already looking for any reason at all to finally free himself from the shackles of his not so shiny past. 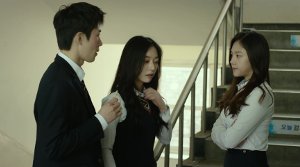 Hae-seong used to be a bully who beat up other children. While he managed to turn the corner, his friends weren't as successful at that and so he breaks with them. Unfortunately, this leads to a number of dialogues, which have TV drama quality. Even the slightly longer scenes, in which the actors almost seem to improvise, go into the same direction. Luckily, those don't turn out too bad, because the actors do a very good job overall. Sometimes director Chae Yeo-joon seems to be aware of the amateurish moments in his debut work because he carries them to a humorous extreme by using a weird soundtrack. These self-ironic moments fit the movie nicely and could have been used even more frequently. For example, Chae-yeong's musical theme conveys a certain kind of playfulness that never lets us doubt that nobody would have a chance against the student in a physical confrontation. 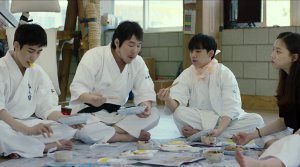 Jung Daeun plays the quiet girl, with whom you should not never pick a fight, very convincingly. Chae-yeong doesn't want to become friends with anyone and the story about her mother and her relationship with her extremely likeable father also give us some clues as to why she's such a withdrawn girl. Jong-goo, on the other hand, is the typical victim with a great sense of justice, who finally wants to be able to defend himself. Surprisingly, we do not get to see his transformation into a fighter who takes down all the gangsters in front of him. Because, like the karate teacher puts it, you cannot simply become a real fighter in such a short period of time. But that is the only serious sentence we get to hear from Chae-yeong's father. Usually, he talks about Choi Bae-dal, the inventor of the Kyokushin karate, and advertises his school with the movie poster for "Fighter in the Wind" - a movie, which obviously no young person knows... Hae-seong, on the other hand, has always been able to hold his own in a fight and quickly regains his expertise. 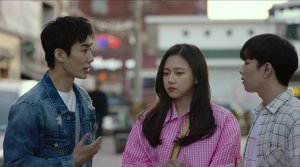 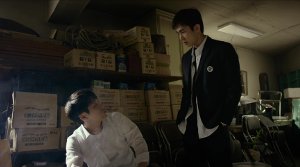 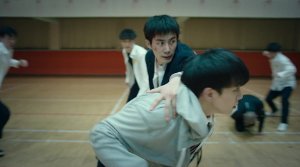 The fights are short, contain a few too many close-ups and cuts which are convenient for the actors, but they are generally decent. For the finale, Chae-yeong was taken out of the picture, as nobody would be able to take her on. A good decision, even though the showdown now reminds us of those typical gangster flicks, in which two guys fight their way through an entire gang. Still, the real heart of the movie is the three students' friendship, which starts out bumpy at first, but only seems all the more believable because of it. The different types of characters that come together here create a nice chemistry. I would really like to recommend the movie, but unfortunately, you can't deny the fact that we get to see a lot of well-known gangster genre stereotypes while the story itself is hardly worth mentioning and often doesn't even go in any specific direction. In addition, there are the somewhat awkward dialogues. However, watching the movie, you quickly forget that this is actually a low-budget production. So, in the end, "Justice High" manages to tell a very warm-hearted story about friendship.