Josee, the Tiger and the Fish 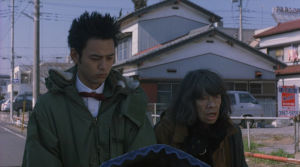 Story: Tsuneo (Satoshi Tsumabuki) goes to college and works part-time at a mahjong parlor. There he hears a rumor about the neighborhood grandma, who always pushes a stroller around in which there's obviously no baby. People say she actually smuggles drugs. On the way home, Tsuneo happens to run into this very person whose stroller rolls away and tips over. There are no drugs in there, but instead a young woman, Josee (Chizuru Ikewaki), sits in it, who is paralyzed from the hip down. Tsuneo brings the girl and grandma home, where he gets invited to stay for dinner. Josee almost doesn't say a word, but she is an excellent cook and reads everything her grandma brings her. But since she is very poor, the reading material is simply everything that people give away for free or throw out. Tsuneo soon finds a reason to stop by Josee's place again in order to enjoy her food. He also becomes involved with social services and arranges that the grandma's apartment is renovated free of charge. Josee is a fascinating girl for Tsuneo and, although he has just found a new girlfriend, Kanae (Juri Ueno), he spends much more time with the physically disabled Josee. Finally, he has to ask himself what kind of feelings he really has for the girl. Josee, however, keeps her distance and when they have an argument, she even doesn't want to see Tsuneo anymore. But a stroke of fate makes the relationship between the two grow again. 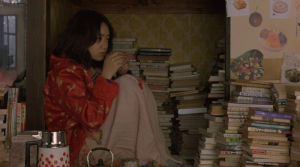 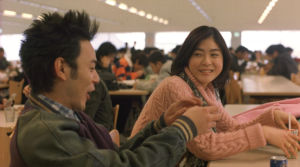 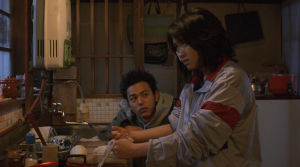 Review: Actually, the 2020 anime "Josee, the Tiger and the Fish" caught my attention at first, but eventually, the Korean movie "Josee" fell into my hands, which also came out in 2020. In the end, it turned out that the movie adaptation of a short story by Seiko Tanabe was already adapted into a movie in 2003. So, in order to proceed chronologically, the Japanese version deserves a discussion first. To begin with, it should be pointed out that this is by no means a candy-colored romantic comedy. Instead, it is more of a drama, with a somewhat macabre sense of humor, and emotions are mostly expressed in subtle ways. Unfortunately, this leads us to the movie's biggest weakness, as the relationship lacks some chemistry and dynamic. The characters as such are actually not badly written, but a lot happens between the lines or in form of looks and gestures. 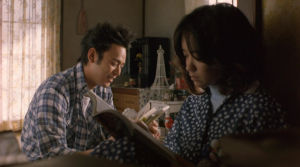 "Josee, the Tiger and the Fish" also somehow takes the path of an art house movie. The first indication of this is the beginning of the picture with its still images. It looks like a holiday slide show, and the movie's tone gets established here as well. Not everything goes smoothly in this romance, but the viewer won't have to tear up all that much. The drama is realistic and life-affirming. That's what makes what's going on so interesting. The relationship develops naturally, despite the already mentioned distance, and this contributes to the story's fascination. A sudden illness that strikes during the movie's last third? No, you don't have to fear that. An extended debate on what it means in Japanese society to be with a physically disabled person? Not even that. It only gets hinted at here and there. Everything that could have made the movie cheesy was completely avoided, and for that you have to be grateful. 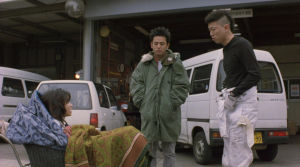 Generally spoken, the story is quite simple. However, there are certainly some problems that need to be overcome. Josee is generally very short-spoken and not interested in Tsuneo at first. It is not entirely clear whether Tsuneo is looking for a romantic relationship with her either. But there is no doubt that he is stoked about her food. When he praises her cooking, she retorts: "Of course it tastes good; everything I cook tastes good", which shows her self-confidence. But this is the complete opposite of what her grandmother says about her. She describes her as "damaged goods" and says that she would be embarrassed if the neighbors knew Josee existed. Moreover, her grandchild is only interested in books. Chizuru Ikewaki ("Oishii Man") miraculously manages to combine the strength of her character with the inevitable inferiority complex going hand in hand with her condition, and she even adds some peculiarities to the mix. 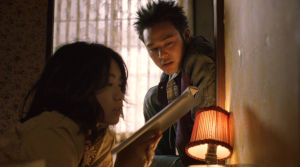 Tsuneo, on the other hand, is a slightly flatter character. At least at first glance. He is popular with everyone and generally a good guy who even gets himself involved in social projects. At some point, he becomes aware of the fact that, despite his popularity, he is pretty average, and that realization hits him hard. Some of his decisions also make clear that he is actually a coward. Satoshi Tsumabuki ("It Comes") works with everything he gets, and at some point, it becomes obvious that his role is actually a little more complex than it might have seemed at first. Unfortunately, this happens a little too late, so the relationship between the two protagonists doesn't come out as successful as it might have. It lacks some spark, even if it becomes clear towards the end that this might actually have been intentional. Nevertheless, the drama and some of the motifs, you would expect in a movie like this, were realized in a pleasantly subtle manner. This makes some scenes quite sad, even though they will never really make you reach for a tissue. 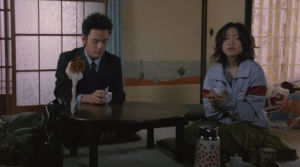 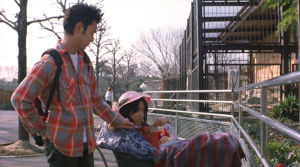 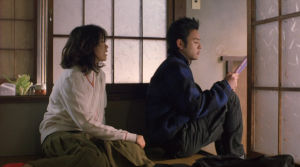 The movie's special atmosphere also stems from its discretely but consistently used humor. This, of course, is due to Josee, who is pushed around in a stroller. But the humor also comes out with a childhood friend of hers, whom she calls her son, and who has an aggression problem. Tsuneo runs into him in a hardware store when he is standing over an unconscious man with a wrench in his hand. Context? None. The two then talk about Josee in a café as if nothing had happened. At another point, Josee gets slapped by Tsuneo's ex-girlfriend, whereupon Josee raises her hand too, and the other girl bends down to the stroller so that she could get slapped back. Despite some initial fears that this movie might be long-winded art house cinema, this beautiful mix of drama and humor actually turns "Josee" into an astonishingly carefree and warm-hearted story. It's like that nostalgic feeling you get when you look back at a somewhat painful but still beautiful time in your life.