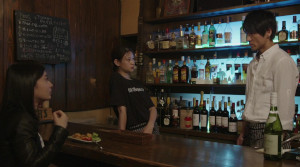 Story: "Hydra" is a small pub with a homely atmosphere, which is run by the girl Rina (Miu). She inherited the pub from her father, who disappeared three years ago, but before that he had left all his belongings to her. The keys to the pub were delivered to her by the quiet man Takashi (Masanori Mimoto), who entered her life as a friend of her father. Now he works in the pub's kitchen. He has an excellent memory, so as a chef he manages to cook quite well by following some amazing recipes. In addition, he seems to be able to read people's faces. Nobody knows anything about his past, and the waiter Kenta (Tasuku Nagase), who is interested in Rina, repeatedly gets the evil eye from him. After a policeman is killed in a toilet someplace else and the killers also start targeting one of the victim's subordinates, Takashi's past slowly catches up with him. That is because the killed policeman's subordinate often visits "Hydra", and Takashi has seen him put roofies in his dates' drinks several times already. Since Takashi didn't want any trouble, he never said anything, but when the man starts targeting Rina as his new victim, he can no longer stand idly by. Shortly afterwards, Takashi is visited by some old acquaintance, whom he has to explain that he is leading a new life now and is taking care of Rina. Which is what he promised her father as he was dying in his arms. But after all, Takashi cannot escape his life full of violence... 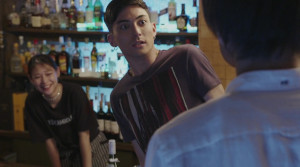 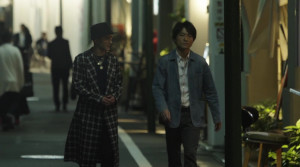 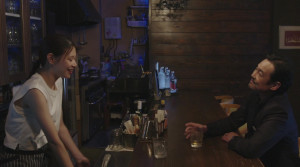 Review: "Hydra" is one of those movies that completely passes you by until you see a movie clip from it somewhere and wonder why this action flick was never on your radar. Then you realize that it's actually a low-budget movie that, for the main part, cannot necessarily be called an action movie. But does that make "Hydra" a gem overlooked by a great number of people, or is it just a low-budget movie hyped by only a few? Here, things get difficult, because generally the former seems to be the correct answer, and therefore you can definitely recommend this movie. At the same time, however, as mentioned just now, the movie in fact also gets praised a little too much in some ranks. Because, apart from the way the action is put on screen, the rest of the movie is just typical genre stuff. The flick will certainly not receive any awards for its screenplay, but the way the well-known story is told is interesting and exciting. 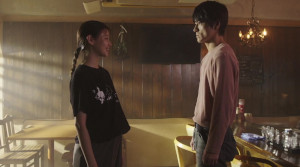 A good example for this is the movie's beginning. A policeman is killed in a toilet, the corpse is put in a suitcase and gets driven through the neon-lit city, while the opening credits are running with an outstanding synthesizer-score as a musical backdrop. There is not a whole lot happening, but the director manages to let his pictures speak for themselves. Then we get to know the bar "Hydra", which is the actual theatrical stage. As is customary for an indie flick, the set is also limited to just one room as the center of events. This works quite well because that way we get to know the characters a little better, and the relationships between them become clearer too. Over time, we also find out more about the quiet protagonist and why he protects Rina. Of course, all this is accompanied by a little danger, which is initially represented by a rapist, but then takes takes a turn towards a larger scale. Interestingly enough, it doesn't really bother us that there seem to be connections, which are not very convincing. 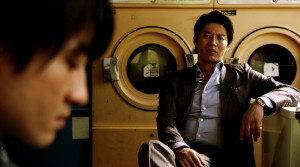 We are willing to forgive director Kensuke Sonomura a lot of things in his debut work, simply because it is obvious that he had an extremely low budget, but 90 percent of the time, he is able to hide this from the audience. There is something intimate about the world he creates, we are basically one of the guests in the bar and get a glimpse into the lives of the different individuals there, while a storm is brewing up outside. This also subtly ups the tension. Probably the biggest surprise, though, is the fact that Kensuke Sonomura previously worked as an action choreographer, among others for John Woo's "Manhunt" (and here the action even was the movie's only positive aspect), because "Hydra" is surprisingly low-key. It's more of a drama about a former killer who wants to retire and protect his "foster daughter", something we've seen several times before (among many others, "Sunflower" from South Korea comes to mind). But the director's background is revealed immediately when we get to the first action scene. 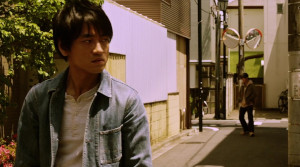 However, it should be mentioned once more that "Hydra" may actually disappoint action fans, because it hardly features any action. But when the action does whirl across the screen, it is breathtaking. Because "whirl" is meant literally here. The action is incredibly fast, and sometimes it's hard to follow the movements with your eyes. Thanks to some hectic moments, they seem authentic and perfectly choreographed at the same time. The sound design also deserves special praise. Normally, I'm a fan of dubbing and creating rich punching and throwing sounds, but this movie takes a pass on all of that. There are hardly any sounds, so we can even hear fabric fluttering through the air and fists actually hitting bodies in a flurry, while the fighters are highly concentrated and not making a single sound themselves. The confrontations are not accompanied by adrenaline-driven music either. The movie simply relies on the very strong essence of those action scenes. 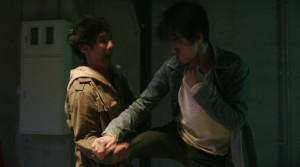 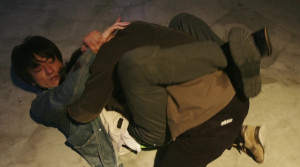 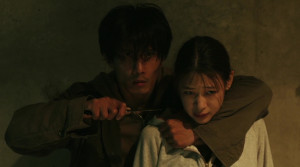 This self-confidence pays off. Aside from the "Rurouni Kenshin"- series, this is probably the best Japanese fight choreography this millennium has to offer. At the latest when grappling is added to the mix, the director proves that he is a master of his craft. Lead actor Masanori Mimoto ("Re:Born") also shows enormous skill and manages to convince with his presence even in the quieter scenes. In fact, the action is all the more impressive because it is used so sparsely in the movie. With its 75 minutes, "Hydra" is a short treat, though, and in the end, a few questions remain unanswered. Unfortunately, this makes you wonder whether the director actually wanted to make more out of the movie but then ran out of money. Aside from the action, director Kensuke Sonomura particularly convinces with the dense atmosphere he creates. You feel drawn into the - otherwise pretty hackneyed - story, while you get carried through the rest of the movie by a beautiful soundtrack and likeable characters, and in the end you are eventually rewarded with some outstanding action.