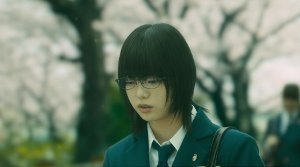 Story: Hibiki Akui (Yurina Hirate) is a fifteen-year-old girl and goes to school where she joins a literature club. There she meets the girl Rika (Ayaka Wilson) who she praises for her short story which was published in the school's newspaper. The two of them become some sort of friends, but it is not really easy to get along with Hibiki. Hibiki is an honest person, but does not seem to care about other people's feelings. At the same time, she protects those close to her with a shocking amount of violence. She seems to be living in her own world. She reads at least one book a day and not long ago she even wrote her own novel, which she sent to a publishing house for a contest. But her manuscript got thrown away instantly because she sent it in via mail instead of handing it in as a digital version. However, the script coincidentally falls into the hands of editor Fumi Hanai (Keiko Kitagawa) who is convinced to have found the next literary genius. Unfortunately, Hibiki didn't leave any contact details and after the editor received a short phone call from the student, during which Hibiki asks what they thought about the novel, the editor is still none the wiser. When Fumi wants to visit a famous author because of an errand she needs to run, she finds Hibiki there. The reason for that is that Hibiki's friend Riki is actually the author's daughter. Finally, all of Fumi's problems seem to be solved, but as soon as the student has her first public appearance, she causes a little scandal... 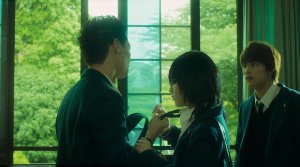 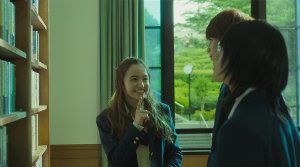 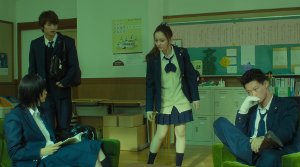 Review: "Hibiki" is of course based on a manga, the unusual characters and the interesting setting leave no doubt about it even in the beginning. The only question is whether we are once more dealing with one of those love stories where coming of age is the focus. The answer to the question is a reassuring no. We don't get a romance or a light-hearted comedy, but a drama about an outsider who doesn't even try to find her place in society and instead just wants to go her own way. Naturally, that's why she constantly rubs people the wrong way and this is the movie's biggest appeal. Hibiki suffers from a dissociative personality disorder. She exhibits quite a lot of behavioral patterns similar to that of a sociopath, but then there are some moments, here and there, when she learns from her mistakes. And her violent behavior mostly serves the purpose of protecting others. 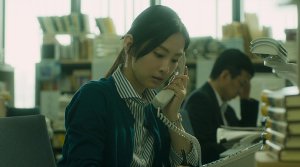 The picture we have of Hibiki gets adjusted during the course of the movie. It is clear that she has problems with social norms that don't seem to make any sense to her. Why should she publicly apologize for something when she has already apologized for her behavior to the affected person directly? It's moments like these that make it clear that Hibiki questions the rules of society. As the girl is a literary genius and incredibly well-read, you tend to easily forget that, of course, she is not an adult yet and still has a lot to learn about life. Books are not all there is. However, it is quite hard for the audience to develop sympathy for Hibiki as she thinks she knows it all. Everybody around her gives her the impression she is right to think so, too, because her judgment is oftentimes considered as correct and irrefutable. 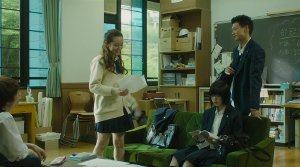 Yurina Hirate is very convincing as the protagonist, but at some point her character gets pretty tiresome. Therefore, it is a good thing that the director made Rika, played by Ayake Wilson, who was only a little girl in "Paco and the Magical Picture Book", counterbalances Hibiki. Riki is overflowing with energy and vitality, but constantly has to deal with her insecurities - not least because of Hibiki. The rivalry between the two girls after they are considered to be nominated for a literary contest seems a little bit artificial, though. But here we get to see the kind of person Hibiki really is. She respects Rika's wishes - even if she doesn't like it - and doesn't talk to her until the nomination is official. Hibiki couldn't care less about all the prizes and contests. However, it's exactly this lack of interest that makes her rivals even more angry. 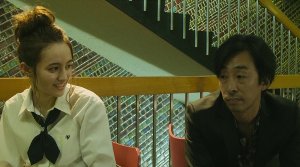 Nevertheless, the genius girl only has enemies until people actually read her work. What Hibiki wrote seems to be almost better than the bible because it manages to convert everybody. Even though it was a wise choice to leave the content of her novel mostly unclear, you can't help but see the novel as a simple narrative tool for the script. You just have to accept the fact that she composed a masterpiece. Moreover, it is a little bit frustrating that, except for Riki, everybody around Hibiki comes up somewhat short. Fumi, played by Keiko Kitagawa, with whom this movie's director has already shot "I Want to Eat Your Pancreas", could have needed a little bit more character work. Mostly, we get to know through Hibiki how people around her are feeling. As mentioned before, you might expect the girl to be at least autistic at the beginning, but then it turns out that she can read people's feelings better than anybody else. 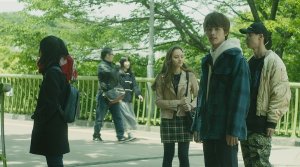 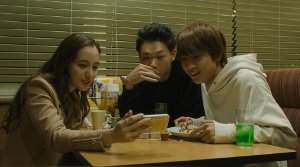 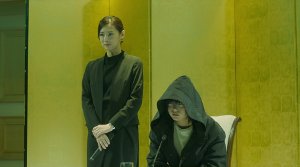 With her insight into other people's emotions, Hibiki also helps her fellow men. However, this mostly happens in a way that makes her appear like a know-it-all, in addition to the unpleasant fact that she actually does know it all. Her approaches are mostly rather extreme, though. Despite everything, it makes the genius girl interesting. But the movie creates some additional artificial suspense through the award ceremony. That doesn't really work and you realize that the director didn't trust in Hibiki as the sole engine that keeps everything running. He was right to think so, as she is not really loveable. Towards the end, you have to ask yourself what kind of movie "Hibiki" actually wants to be. The bright pictures and the light atmosphere remind us of a comedy, but in fact, we are dealing with a drama here. The movie focuses on the magic of literature as well as coming of age. However, everything seems a little bit undecided, and a clear direction could have made the movie a lot more fascinating.