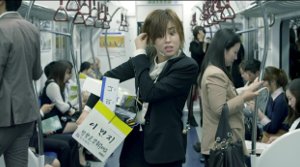 Story: Kang Mi-na (Choi Kang-hee) has a secure job as a civil servant, but lately, she is on a losing streak. After a tax evader poured a bucket of water over her head and a reckless driver got her into an accident, she vents her spleen at work and gets dismissed for two months. Because her father (Joo Jin-mo) is in a hospital and does not have the heart to give up his small corner shop, she decides to take over the business, even though she does not have a good relationship with her father. However, she only helps out under the condition that she is allowed to sell the shop within two months. Her father's hospital bills get bigger and bigger and so does his pile of debt. The shop's main customers are young children on their way to the school nearby. At first, Mi-na chases the kids away, but soon she realizes that she won't find a potential buyer for the shop if she doesn't have any customers. So, she tries all kinds of things to win the kids over again. In the process, she also meets Choi Kang-ho (Bong Tae-gyu), who has just started as a teacher and at the moment tries to help problem child So-yeong (Kim Bo-yoon) at school. Like him back in the day, the little girl struggles with being treated as an outsider at school. And Mi-na, too, is all too familiar with this kind of pain and therefore wants to leave the little town as quickly as possible. 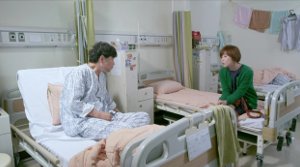 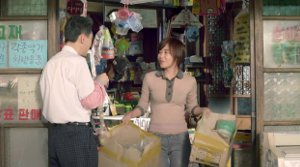 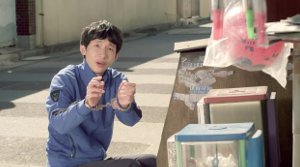 Review: The title of the movie actually already reveals quite a lot about the plot. The corner shop, which sells all kinds of stuff, is like a treasure chest of memories. Mi-na wants to get rid of the remaining products, but slowly finds out that her father only secondarily dealt in goods. Instead, he gave the kids some nice memories. Therefore, it doesn't come as a surprise that "Happiness for Sale" works hard on creating a feeling of nostalgia. The images are warm and cheerful, the movie's tone is upbeat but not too hyped-up and the characters are loveable. A small movie, you normally wouldn't give much attention to, but the drama around a woman who learns what is really important in life manages to affect us in a pleasantly subtle way. Moreover, the narrative style is pretty nice and doesn't get lost in too many side plots. 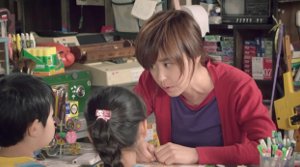 First of all, it should be obvious that we are not dealing with an exceptionally innovative movie here. Certainly, it is not an unusual angle for a comedy to have someone, a new shop owner in this case, learn something about herself and the audience then getting to watch her become a better person. However, it is striking that we do not get slapstick humor or a love story thrown at us, which would usually be indispensable for movies like that. At first, it seems as if the relationship between Mi-na and Kang-ho might develop into that direction, but in the end, they only get closer as friends. Therefore, this comedy manages to portray the characters a lot more sincerely than other movies of that genre. As a result, the individuals are not simply copies of well-known stereotypes, but instead manage to captivate us. However, for an otherwise rather predictable plot this is also a necessity. 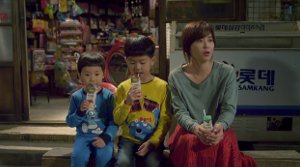 The focus mostly lies on Mi-na and how she is incapable of dealing with kids, who, unfortunately, represent the majority of her customers. For her own selfish reasons, she then pretends to establish a good rapport with them. And suddenly, she actually starts to come to life again. Her shop turns into a meeting place for friends, who want to spend their meager pocket money for sweets, pencils and toys. There is no real antagonist, apart from maybe the mothers who are not pleased to see their kids stuffing their mouths with unhealthy food. However, it is not really an "ideal world". The subplot around the teacher deals with a little girl, who gets bullied at school. And here we get to see the striking parallels to Kang-ho's and Mi-na's childhood as they were bullied too. Of course they know each other - how else could it be - and only recognize each other as adults after they have already clashed violently several times. 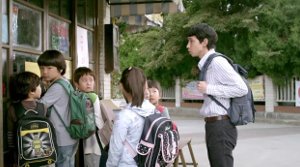 Choi Kang-hee ("Goodbye Mom") and Bong Tae-gyu ("Two Faces of my Girlfriend") have good chemistry on screen. Their characters are loveable, even if it is not immediately obvious with Mi-na. But she is also struggling with the relationship towards her father, who she blames for being bullied in school. Nevertheless, it turns out that her father is a kind-hearted person and that she misunderstood a lot of things during her childhood, which also doesn't come as a surprise. Due to its interesting characters and the successful narrative style "Happiness for Sale" never gets boring. To the contrary, you even look forward to further developments and quickly start feeling at home in the little corner shop. The notion of being part of a little family sets in and it doesn't seem like you've been manipulated to feel that way either. 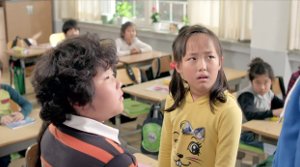 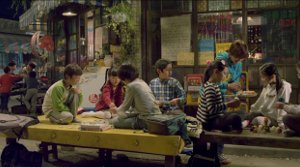 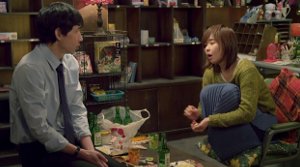 The atmosphere in the movie feels authentic and you are reminded of your own childhood days. However, director Jeong Ik-hwan does not just make sure to create a feeling of nostalgia and warmth for the audience, but also deals with the topic of bullying without pushing it too much into the foreground, lest it doesn't get too serious. The light-footedness with which he guides us through the movie is marvelous. In the end, "Happiness for Sale" is that kind of dramedy which might not be worth seeing for everyone, but it certainly leaves you with a warm feeling without being tacky. This is not only due to the well-written characters, but also thanks to a capable director, who knows how to skillfully use sets and props. Especially for the fact that the director decided against turning the movie into a tearjerker - which is usually common practice in Korea - the movie deserves a thumbs up.