Guardian of the Palace 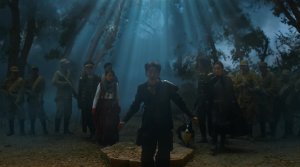 Story: Tianya (Peng Yusi) has to watch as people in his city suddenly suffer from a mysterious illness. In ancient writings he reads that this disease last existed in the lost kingdom of Heishui. With their father and brother Tianya and his sister Jiu Yue (Lu Qiwei) he had already found the kingdom's temple in the desert a while ago, but something attacked them there. Their brother sacrificed himself and blew up the temple. Now Tianya seems to have to go back to the temple, because General Feng Peichuan (Mark Du) and his unit come to the city and he tells him to get the Golden Moon Gem, an artifact that gave supernatural power to the kingdom of Heishui. Tianya and his sister Jiu Yue have no choice but to comply, because not only did the general take their father hostage, but the artifact could also cure the deadly disease of the city's residents. Thus, they go into the desert with Feng's daughter Wu Nian (He Yirong) as a chaperon to find the entrance to the buried temple. However, Tianya has a strange feeling about Wu Nian, it's almost as if he knew her. But while he tries to unravel the mystery of her identity, the treasure hunters are tailed by something. Something seems to be lurking out there, but the desert and the forces of nature also want to prevent the artifact from being uncovered. A fight for survival is about to commence... 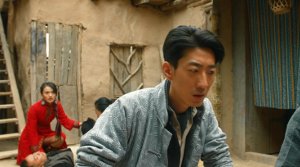 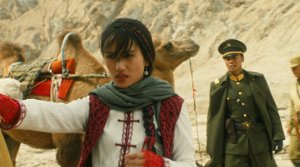 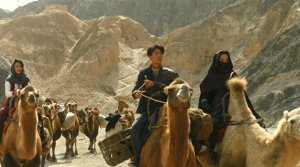 Review: One quick look and it becomes clear which movie this adventure flick is based on (if it's not already clear looking at the title anyway). Nowadays, there are numerous "Indiana Jones" copies available from China. Most of the time they are poorly written and have bad CGI. However, I gave "Guardian of the Palace" a chance, because the trailer showed a whip being cracked in wuxia style. In China, it's actually hard to separate the wuxia from the fantasy genre. And so, we get sandstorms, an enchanted forest, demon-like giant snakes and stones that can only be stepped on in a specific order. What can go wrong with that? Short answer: A lot! Starting with a director who often seems very amateurish, even when the movie otherwise looks quite polished. Except when we get to see giant computer-generated snakes, that is... 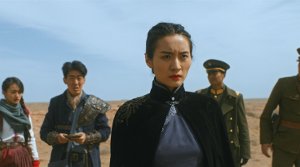 In fact, the movie suggests to be bad right from the start. We get to see a scene that was ripped right out of the middle of the movie and then we are thrown back to the beginning. This may work in tv shows, but when it comes to movies, the number of times this was done successfully can be counted on the fingers of one hand. The big problem here is that, of course, later it's not a moment of surprise anymore, when we get to see what kind of creatures attack our heroes. Using the camera eye with a distorted focus as the monster's perspective and letting it glide menacingly through the camp of the adventurers is already pretty cheap to begin with. But when you then also know which creatures pose the threat, things get even more boring. But let's stay on the pretty horrible camera work for a moment. The camera often moves through a scene in a shaky manner, even if it doesn't fit the style of the movie. And in addition, there are also some unusual camera shots that are just irritating. 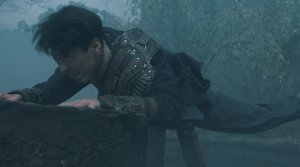 However, what kind of style the movie wants to call its own, remains a mystery. Everything just seems jumbled together. In fact, this also includes the story itself, if you can even call it that. Actually, the story is just about getting from one scene to the next. And the scenes are not even original either. It's as if the screenwriter just took a few clichés from the adventure genre and threw them together. Sadly, the story around Wu Nian, who seems to have some kind of connection to our hero, would have had potential. But, of course, it was woven into the movie in a very awkward manner. The villains were taken out of the cliché box as well (an evil-looking general who is searching for an artifact from the mythical past to increase his power to infinity) and the protagonist's family history is quite unspectacular too. None of the characters stand out in any way. 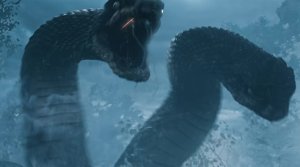 The actors are not exactly amazing either. You can see that they haven't been involved in any major productions yet, and if they did, only in small supporting roles. The performances are by no means amateurish, which is already a big plus, but they can't make more out of their roles than the script provides them with. And the script is pretty weak. Similar adventure movies - which sometimes even are of higher quality, though - like "Wu Dang" already had to deal with the problem that the events depicted are not part of a larger picture and instead just represent sets in which the characters randomly stumble into, in order to show some nice action scenes. But the action in "Guardian of the Palace" also leaves much to be desired. Instead, the movie tries hard to create some kind of suspense; for example, in the strange forest that seems to be alive. But it is not enough to mainly convey tension through a hero who is looking around nervously. 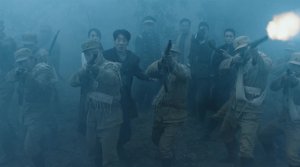 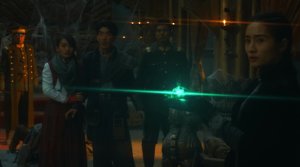 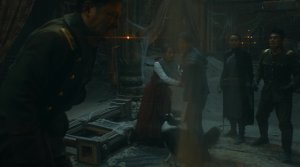 By now, it should have become clear that "Guardian of the Palace" is quite uninspired and boring. But there are in fact a few positive aspects. If there is no bad CGI to bear, the desert landscapes are pretty impressive and the protagonist's faithful dog upstages everyone else. If it had handled things the way it did during its finale, this adventure flick could have turned out a whole lot better. The finale scores with over-the-top action and even a little gun-fu. Here the movie gets a certain b-movie charm, which would have been a good fit for it in general. Unfortunately, the flick tries to be bigger than it is. And here the countless weaknesses are just getting too obvious. A movie that may not look like it, but in terms of quality seemed to have been produced for television. Consequently, you should steer clear of this flick.