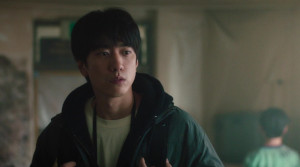 aka The Grotesque Mansion

Story: Ji-woo (Sung Joon) draws webtoons, but his debut work was not very successful. Therefore, he now visits the caretaker of the Guang-rim Mansion, an apartment complex in which no one lives anymore. All sorts of strange things are said to have happened there. The caretaker (Kim Hong-pa) actually tells Ji-woo some stories, such as that of a writer who rented an apartment because he wanted some peace and quiet away from his wife and especially his child. But one floor beneath his new apartment, some children are making a lot of noise. When the caretaker tells him that no one actually lives in the apartment beneath him, he does not believe him, and one day, a child even sneaks into his apartment and destroys his laptop. In the past, there used to be an orphanage on the floor beneath him, and the children there are all said to have burned to death. Are those children now haunting him for some reason? The caretaker also tells Ji-woo the story of a pharmacist (Park Sojin) who had an affair with a married man. When he shows up one day and wants to stay at her place for some time because his wife found out about the affair, the pharmacist thinks that she finally has her lover to herself. However, the radio keeps switching on by itself, reporting on a man who has killed his wife and their child and is now on the run. But the pharmacist only becomes suspicious and realizes that something might actually be off when her boyfriend is in the bathroom and suddenly rings at the door as well... 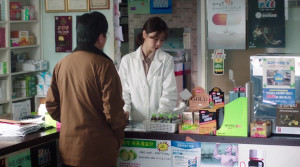 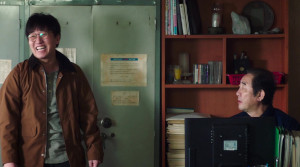 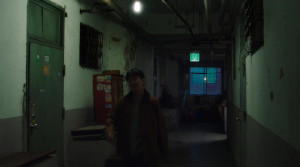 Review: At first glance, "Ghost Mansion" has more to offer than you would expect when hearing the title. The horror flick is also by no means as cheap as some other genre representatives; just think of the peak season of horror movies around 2005 and works such as "APT". Nowadays, the focus of Korean horror movies is no longer on long-haired ghosts, but instead more on shamanism. Nevertheless, even that theme has already led to disappointments with movies such as "Metamorphosis". "Ghost Mansion", on the other hand, seems to be an anthology film, at least until you realize that there actually are not several different directors responsible for individual chapters, but instead there is just that one. This is quite irritating, because if it had been an anthology film, you could have understood why the chapters are hardly connected with each other, but this way, you just have to wonder what the meaning behind this approach might have been. Maybe the director wanted to integrate as many genre elements as possible in order to create a maximum level of horror. 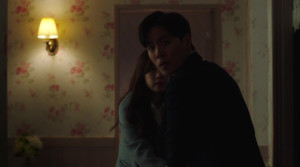 But you actually don't get real horror here. Strictly speaking, the jump scares are not that bad. The camera work is good too, the sound effects are nice, and the score is also utilized in the right moments. And even though the numerous jump scares are quite predictable, they still work most of the time. So, what's left to say? They are just part of the genre. Most of the time they consist of the protagonist seeing something, looking away for a moment because he notices something else, and when he looks back, something has changed in a creepy way. At a certain point, the pattern is pretty clear. The stories are structured in a way that there is some kind of resolution in the end, which are supposed to be surprising, but that actually never works. Another irritating thing is that there is never really something at stake. Since we (almost) never directly get to see the death of a person, everyone has simply gone missing in the end. We also never really feel sad about someone's death because we don't get enough time to get to know the characters better. 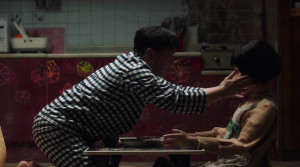 The movie's framework is created by the webtoon artist, who listens to the stories. Sung Joon ("The Villainess") plays the "main character", but since he is so focused on hearing more stories, his character doesn't even get more depth in moments like when he is supposed to celebrate his birthday with a friend. As I said before, the other characters only appear in their respective chapters, even though there is an interesting overlap in a pharmacy during the first episode already, since every one present at the pharmacy gets his/her own chapter. Unfortunately, this is only a nice touch and nothing more. In fact, you never get the feeling that there is actually more than just one person living in the building at the same time, which makes the timeline a bit questionable. But maybe you just shouldn't think about things too much. Apart from the artist, who guides us through the stories as a listener, there is absolutely no connection between the stories. And that is the movie's biggest shortcoming. 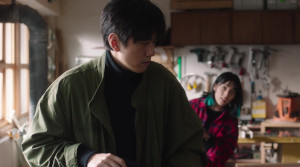 With an orphanage that was on fire in the first chapter and mold that covers everything later on, we are repeatedly told that there is a curse on the building. This is due to a religious cult, which is then the focus of the finale. But there is no real connection between any of the narratives. This makes everything feel quite episodic. At the beginning, you are a little bit curious because you want to see what new supernatural occurrences will haunt the inhabitants, but after you realize that there will not be any resolution linking everything together, you only feel like getting more and more of the same. It would have been nice if at least the building had been captured as an omnipresent, almost breathing entity. A few good camera angles, fitting sound effects, and a hint here and there would have worked wonders - but no such luck. 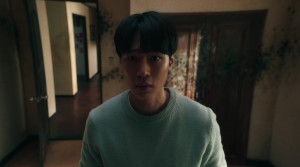 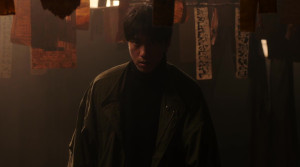 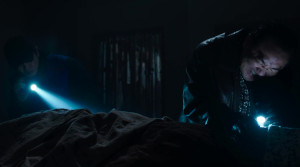 The opening credits are already a bit strange, because they are almost more suitable for a tv series, and apparently the movie was even broadcasted as individual episodes. But it lacks the original touch of other anthology films, in which different directors put their own visions of a specific theme on screen. Therefore, I was quite surprised at how pleasantly entertaining the movie still was, even though it ran out of steam towards the end. In terms of craftsmanship, "Ghost Mansion" is pretty well done, but unfortunately, it always uses well-known genre elements. While there is no originality, at least you get some variety with the range of the genre elements shown. As a genre work, the flick therefore has its right to exist, but horror movie connoisseurs will not get anything new here. Sadly, the characters in particular are pretty flat - which is in fact also nothing new in the genre - and create a certain emotional distance to the events. But at least the atmosphere and the set design work pretty well.