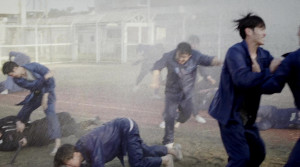 Story: Tiger (Jung Mi-nam) and Viper (Hwang In-moo) are in rival gangs and constantly clash with one another in prison. Prison guard Lee Hye-myeong (Lee Won-jong) always tries to mediate between the two, as he wants a quiet job, and his boss could soon be promoted. That, in turn, would make Lee the head of the prison. Then his idea is to let the notorious gangster Lee Tae-sik (Lee Sol-gu), who is soon supposed to be transferred to his prison, take over the work as a peacemaker. And in fact, Tiger and Viper quickly submit to Tae-sik's will, as he is a legend in the gangster world. Finally, peace returns to the prison and the inmates are also happy with their new lives and the special treatment they get. However, after his superior was promoted, Lee Hye-myeong does not actually get the job as the new head of the prison. Instead, Jo Pyeong-ho (Jang Gwang) takes the reins, and he is anything but happy about how kindly the prisoners are treated. He wants stricter rules and controls, and he also has the prisoners' cells searched, which makes everyone resent him. If Hye-myeong wants to keep his job, though, he can't say anything against the new methods, and so he enforces the new rules with all his might. Apparently, the new boss is so merciless because he still has a score to settle with Lee Tae-sik... 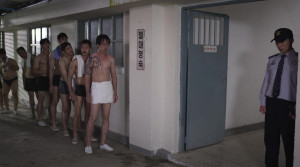 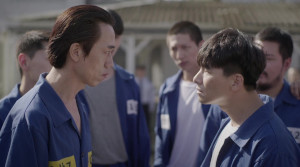 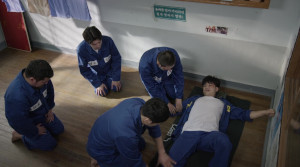 Review: Whenever possible, I try to give smaller productions a chance from time to time, especially when there is somewhat of a slow season on the blockbuster front. In addition, "Asurado" has the advantage of not being unnecessarily long with its 90 minutes, and so you would not be too upset about the time you might waste. However, this prison flick is by no means as bad as you might initially think. Surely, you might sometimes get the feeling that you are watching a movie which was produced for TV, but at least, it mostly does not look like a cheap production. The setting also makes sure that the suspense level is kept up, and even though our antiheroes do not get any serious character development, you can still sympathize with some of them. "Asurado" can therefore be a nice evening entertainment, but maybe you need to lower your expectations a little, just as I did. 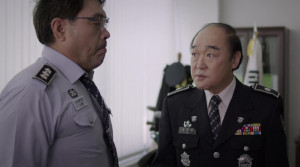 At the beginning we are presented with some of the dynamics in the prison, especially the one between the two gangs, who are always at each other's throats. Yet, peace returns very quickly, mainly thanks to Hye-myeong's efforts. And just like that, you have a prison that is by no means as clichéd as you might have expected at the beginning. The inmates fool around, and since the focus is on the two gangs, you also get to see them in their everyday life as well as the pecking order that exists in such an organization. However, the small difference here is that, at the end of the day, the prison guards still are at the very top. While one peaceful day follows the next, you obviously already expect there to be a crisis, and then it actually comes along in form of the new prison boss, played by Jang Gwang, who is mainly known for playing corrupt politicians in various movies such as "The Villagers". 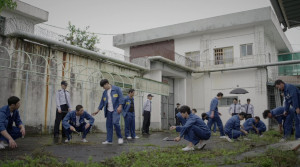 While the movie at first also makes fun of other flicks like "A Hard Day", there is not much to laugh about later on. With that the movie also loses a little bit of its charm. Actor Lee Sol-gu had recently already played the lead in a thematically similar movie, "King of Prison", but it is difficult to say whether he actually is the main role here as well. In fact, everything revolves around him, but somehow, he still often stays in the background, which can be a little irritating. Even though we learn a little more about his past through flashbacks - which are also some of the few moments during which events do not take place in the prison -, in which the little storyline he actually has unfolds, he remains bland as a person. The other characters also often seem unnecessarily flat. At least, there is often a certain kind of chemistry between them, so things stay reasonably interesting. 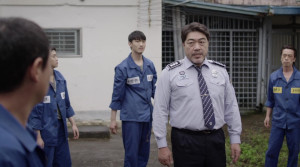 A really fascinating aspect is the already mentioned pecking order. Because with the new boss, the rather sympathetic and friendly warden Hye-myeong has to change too. The pressure from the new boss suddenly makes the prison guards become more vicious and brutal. But if you thought the movie would go on to deal with this subject matter on a socio-critical level, you would be mistaken. Nevertheless, it still gives the movie a different touch. Of course, there is also a little action from time to time. Lee Sol-gu is an excellent fighter, and in some scenes, he is allowed to show off his abilities. Unfortunately, this is where the movie's low budget shows, as the TV character of the production somehow becomes apparent in those fight scenes, although the fights themselves are quite well-done. Here, Yoon Yeo-chang's directing somehow comes across as amateurish, but the editing might also be to blame for that. Despite everything, those short fight scenes are still some of the movie's highlights. 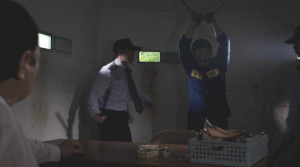 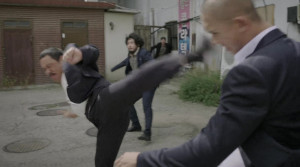 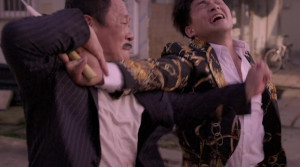 The low budget also becomes apparent in the setting. Most of the time, we move around in the same rooms or in the prison yard. In addition, it often looks as if only our two gangs serve time in that prison and no one else. The sound and the sometimes unnecessary music also clearly show that the movie did not have a lot of money available here. The script, written by actor Lee Sol-gu himself, seems somewhat unrefined, but it's exactly those obvious rough edges and barely polished elements, which give "Asurado" its real charm. Without that, you would just have a thriller in front of you that had nothing new to tell, and if it had polished images, you would probably review the movie more harshly. There may not necessarily be a good reason to watch this movie, but strangely enough, the flick still managed to entertain quite nicely right up until the end.