Story: Female student Ha-young (Ha Ji-won) is looking for her "Prince Charming". On one of these days where everything goes wrong, she just got dumped by her boyfriend, she kicks a can, which accidentaly hits Hyung-joon (Kim Jae-won), who just drove by and now crashes into a wall. Pretty upset, he wants 3000 Dollar for the little scratch on his expensive car. Since Ha-young doesn't have the money she agrees to sign a contract in which she is stated to be Hyung-joon's slave for exactly 100 days. So she now has to clean his flat, carry his shopping bags or plenty of other errands she has to take care of. Later on, she finds out, that the damage on the car would have costed only a few Dollars! Now, she wants to take revenge on him, but since she signed a contract there is nearly no way for her to do so.
When the day of her new freedom finally arrives, Ha-young becomes aware that she started to like her arrogant "master". And behind his cool and rejecting behavior she assumes that he has feelings for her, also. Yet, Hyung-joon just dumps her and goes his own way, which breaks Ha-young's heart...

Review: "100 Days with Mr. Arrogant" is one of those typical average sassy girl copies, that were thrown onto the market in the course of the "My Sassy Girl" hype. The story is so typical and predictable, that you could tell it completely without spoiling anything, because a happy ending is as sure as the fact that there will be a lot of other pointless movies of this kind out of Korea in the near future. 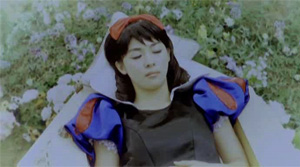 A young female student is forced to spend her time with a rich, pampered and arrogant young man. At first, they hate each other, but with time feelings start to show between the two. Hyung-joon doesn't show them, natch, and his behavior towards Ha-young is even pretty despicable. But the whole teasing is of course just a part of the love story. Parallels to "My Tutor Friend" aren't coincidental, yet the movie lacks just to much to match up with that one.

As a comedy-romance "100 Days with Mr. Arrogant" takes place in a fluffy, colourful, happy teen-world. The movie's humor mainly focuses on Ha-young's several grimaces, and the movie also doesn't hold back with some gags below the belt. Which is one of the film's weak spots. Ha Ji-won plays the young Ha-young in such a naive and childish manner, that you have the impression she is 12! One after another, without giving us just a second of a break, she plays her emotional outbursts right into the camera and amazes the viewer with her gigantic repertoire of grimaces and faces. Sadly, not in a positive way. Ha Ji-won's performance is so exaggerated and wacky that it soon becomes incredibly annoying. You nearly have to praise her for this terrible performance... 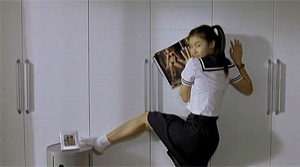 Yet, the masculine part of the movie, Kim Jae-won, isn't much better. His character always is somewhat one-dimensional and seems, just as everyone in the movie, like a caricature. He is the typical spoilt, arrogant boy, who is for whatever reason (cause he doesn't look that good) admired by women.
Unfortunately, the chemistry between the two main actors is also lacking something. Most of the time everything just feels forced and artificial.

In the first half of the movie there are quite a lot of gags, of which some are really well done. For example, there is one elevator scene, in which some misunderstandings about Ha-young's "services" occur. Apart from that, there are some other wacky scenes that will let you smile for sure.
Usually, there are Ha-young's different faces that are supposed to make you laugh, but in the end it just feels too girlish and childish.

Starting with the second half, the movie becomes a little bit more serious or at least the gags aren't that frequently anymore. At the end, the mood even changes into the melodramatic. Unrequited love and the usual drinking sessions lead us to a Happy End, which resolves everything in a pretty weak way and feels so far-fetched, that it becomes a pain. By now, it should be clear for everyone, that first-time director Shin Dong-yeob did his work according to approved formula. At what cost soever, the unnecessary shift to the melodramatic just had to find its way into the movie. Originality is something you won't find here... 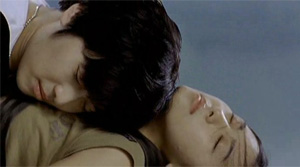 Nevertheless, the movie also has its upsides. Because of the solid directing, fast pacing, even though you sometimes have the feeling that the movie doesn't know where to go, and some nice gags, "100 Days with Mr. Arrogant" is an entertaining movie, but yet absolutely meaningless.
At least, some of Ha-young's "visions" give the movie some alternation and nice special effects. From the princess, waiting for her blondhaired prince who wakes her up with a kiss, to the fighter, who makes his way through a whole bunch of gang members to save Ha-young, there is quite a lot to be seen. Unfortunately it's all overshadowed by the predictability of the rest of the movie.

Those who don't expect anything more than one of those typical comedy-romances, will have some meaningless colourful fun, because you won't get bored while watching. The rest should go for the more inventive movies of the genre, like the already mentioned "My Sassy Girl".
Besides, you can't deny that the movie has its own unique, albeit (as already mentioned) incredible clownish charme, thanks to Ha Ji-won. Thus, with a lot of good will, I will rate it better than it might deserve...