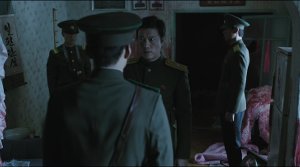 Story: A serial killer terrorizes Seoul. The police are incapable of capturing him and one lead investigator has already committed suicide because of media-related pressure. Therefore, Chae I-do (Kim Myung-min) is tasked to solve the case. His unorthodox and not always legal methods have actually sidelined him within the police force, but he is just the right man for this case. In fact, Chae has soon identified the murderer: Kim Kwang-il (Lee Jong-suk), the son of a powerful North Korean general. Kim got help by the South Korean intelligence agency to cross the border to the South and thus things look everything but good for the intelligence service now, if Kim should really turn out to be a killer. Agent Park Jae-hyeok (Jang Dong-gun) is supposed to take Kim into custody, but Chae has already made sure that no one takes the case from him by securing an arrest warrant. However, the CIA is also interested in Kim being freed since he has information about the bank account of his father. Chae seems to be powerless against so much resistance within his own ranks and Kim taunts him since he knows about his immunity. But then Ri Dae-beom (Park Hee-soon) turns up, who is hunting Kim because of his crimes in North Korea, and he gives the investigator a helping hand... 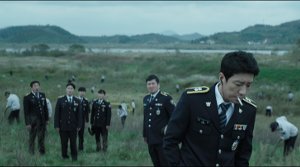 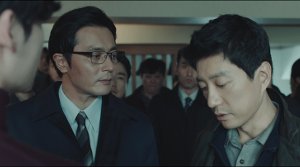 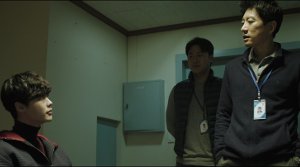 Review: On paper "V.I.P." might sound as if it were a mixture of different genres that are popular in Korea at the moment: investigative thriller and espionage plot. In fact, the movie isn't just a cheap mix of different genres and elements, though, but an extremely tough and gritty flick, which will completely please genre fans. I can't deny that I felt the kind of excitement which I usually had with Hong Kong thrillers back in the day. Therefore, I was even the more surprised that quite some critics outright roasted the picture. I can only laugh about this since the reasons for that are quite absurd and it seems as if all critics are simply jumping on the band wagon since they don't want to be seen as misogynic. 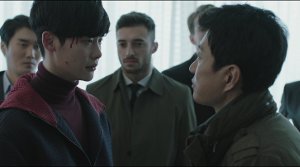 The alleged big problem of "V.I.P." is that women are merely depicted as victims and their killings are outright celebrated. I will try to remain as objective as possible, although I can't deny that those kinds of exaggerated problems get me a bit worked up. The movie displays a lack of a female cast, no doubt. And this might not necessarily be considered modern. In fact, it even stands out. But what has already been a minor issue in director Park Hoon-jung's other works like "The Tiger: An Old Hunter's Tale" or "New World", but which no one really cared about is now made into the one sole reason that makes this film unwatchable. Probably being the major reason for this criticism is the first murder scene which is showcased in full-length. 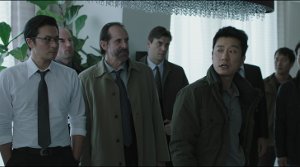 The movie's first scene is in fact disturbing. I'm no one who can watch horror movies with killing scenes depicted in all detail (interestingly enough I even know a few women who actually like to watch those movies), I simply get sick. And even though there isn't much blood in this scene, you start to wonder why the murder has to be shown in such detail, making you sick to your stomach. Director Park clearly sticks to the creed "Show, don't tell" and by doing so also sets the tone for the rest of the movie from the very getgo. In my opinion, this has been a great decision, as it turns out later on. After all, the anger at the killer and the despair setting in as he constantly slips through the detective's fingers has its origin in this very first murder scene. All other killings of women aren't even shown! Instead, men are butchered in great numbers! And no one writes about that we even see a kid hanging from a window? Why isn't this disturbing to anyone? 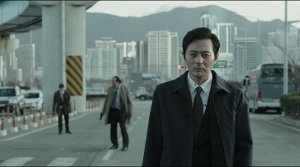 "V.I.P." is an extremely dark and also violent movie. There are assassinations, which again remind you of Hong Kong flicks and this shouldn't be surprising since the movie actually even starts in the former British crown colony, and then there are also the good guys who try to work following the rulebook or just the orders of their superiors. Unfortunately, the killer seems to be untouchable since he is protected by several intelligence agencies. The South Korean intelligence more or less wants to cover up their mistakes, but also has to follow the lead of the CIA, which once again underlines Korea's dependence on the USA. And Kwang-il, played pretty convincingly by Lee Jong-suk ("The Face Reader"), knows how to make use of this. Kim Myung-min ("Deranged") plays the unusual cop who doesn't stick to the rules, but to what's morally right, with the needed amount of nuances and Jang Dong-gun's ("My Way") role seems only to be a supporting one, but as the story progresses it becomes more and more interesting. 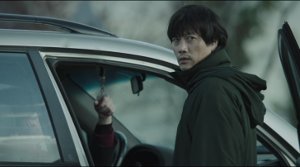 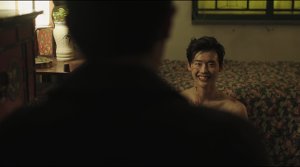 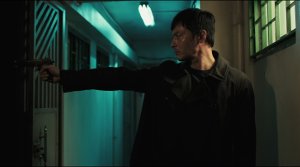 It's these anti-heroes that make this thriller so fascinating. Park Hee-soon (also to be seen in director Park's "The Showdown"), is the kind of broken hero predestined to put Kwang-il to justice which the boy has always been able to elude thanks to his immunity. With Peter Stormare there has also been added an excellent American actor. The political interests turn the hunt for the killer into an epic story, and this even though Kwang-il is very soon in custody. "V.I.P." has a few suprises in store for you and the prologue, which finds a conclusion in the epilogue, - the movie is split into chapters - almost showcases the handwriting of John Woo's heroic bloodshed. A movie that rather aims at a male audience, but because of that certainly shouldn't be called misogynic. Ultimately, "The Villainess" is also a movie aiming at a male audience and has a woman standing in its center. It doesn't alway have to be that way, though. Granted, one or two women surely wouldn't have hurt the movie. By the way, this actually isn't an action movie, but a true thriller with some espionage elements. With its running time of 127 minutes "V.I.P." may seem a bit too long during a few rare moments, but apart from that there isn't really anything that would speak against recommending this outstanding thriller.