The Way We Dance 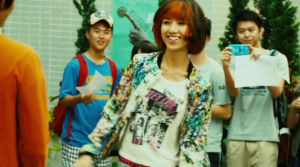 Story: Fleur (Cherry Ngan) works in her parents' tofu shop and she cannot wait to enroll at university, so that she can finally stand on her own two feet and escape her traditional parents' house. Eventually, she gets accepted at a university and the first thing she wants to do there is to pursue her love for hip hop dance. For that, she came to the right place, because the dance group BombA, led by Dave (Lokman Yeung), has already built up a reputation, and since Fleur quickly only has eyes for Dave, she joins the group. Her lifelong dream has come true, and her individual style fits well into the group. Soon, there is a first dance-off with the rival dance group Rooftoppers and BombA has to realize that they still have to learn a lot. Fleur is very motivated to get better, but there is a falling-out, and she leaves the group. Before that, the head of the Tai Chi Club, Alan (Babyjohn Choi), had already noticed Fleur's extraordinary talent. Her body control makes her the perfect Tai Chi practitioner, but Fleur shows no interest. Alan doesn't give up, though, and since she has nothing else to do anyway, Fleur finally allows him to teach her. Even though she can't stand Alan at first, she quickly realizes that he manages to make her feel special. She even begins to combine Tai Chi with hip hop dance. And when BombA suddenly asks her to return to the group, she doesn't know what to decide, as she actually wants to dance again... 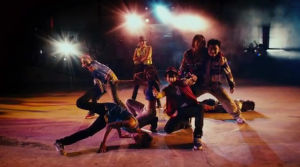 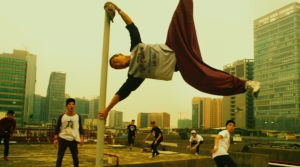 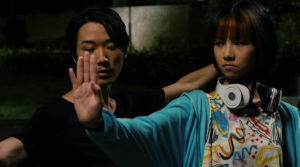 Review: For whatever reason, this dance movie made its way to Netflix. And that's a good thing, because without the video description it probably wouldn't even have been on my radar. Mixing Tai Chi with hip hop? This is a pretty original idea and not as far-fetched as it may sound. After all, both arts of movement share that a certain kind of flow needs to be maintained. Matching the different tempos of each style, on the other hand, is probably going to be a challenge. Even though it was the Tai Chi motif that made me watch "The Way We Dance" in the first place, it wasn't what made me keep watching. In fact, the Tai Chi theme gets soon pushed into the background and only reappears at the end, although more in form of a footnote. Instead, this is a real hip hop dance movie that portrays a subculture of Hong Kong. And this subculture is not so different from Western ones, which keeps the culture shock to a minimum. 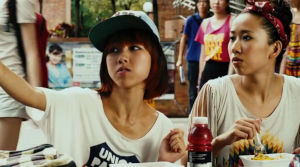 The introduction of the movie, on the other hand, seems a little bit alienating, culturally that is. We get typical Hong Kong humor while the movie makes fun of the traditional family picture. But soon Fleur is at an university where she is surrounded by young people, and she is part of a group for which dancing means everything. I should mention, though, that the first half hour of the movie hardly convinced me. The dances are rather unspectacular and especially the sometimes shaky camera work irritates, and along with the dim lighting it gives the movie something amateurish. Generally, this darkness is pretty annoying in some scenes. It's unclear whether the director wanted to create something like an underground feeling with that or the person responsible was just doing a bad job, but it is confusing during the dance scenes. It was probably just supposed to look cool... But it only really gets cool when the Rooftoppers perform. 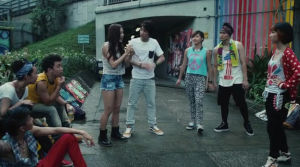 The professional dancers know their craft and their first real performance looks more like parkour with Capture the Flag elements than hip hop dance. Extremely well-done. Even later, they know how to impress with acrobatic maneuvers. In addition, there is a dancer who puts on quite a show even though he only has one leg. When it comes to the music, however, there's nothing special happening in the background. What is impressive, though, is the fact that some long scenes are unedited or with barely any cuts. During the end credits we get to see some dance scenes, where something actually went wrong, and as a bonus, there are also some training scenes. In a movie like this, it should come as no surprise that the protagonists just start dancing/practicing in the middle of the street like crazy people. In addition, even though, the movie is only from 2013, this subculture has been portrayed so many times in the meantime that some things are already hackneyed and many things seem a little cliché. 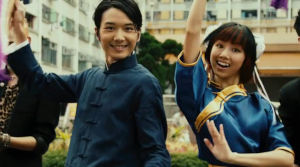 Cherry Ngan ("A Witness Out of the Blue") cuts a fine figure, but she is clearly not a professional dancer. In general, you start to wonder how BombA even wants to have the slightest chance against the Rooftoppers. The finale uses the only logical solution: innovation. For example, as mentioned before, there are short sequences in which Tai Chi is incorporated into the choreography, but there is also a little shadow theatre included as well. Fleur makes fun of the traditional dances at first, but then she recognizes elements that can easily be translated into modern dance. In a somewhat forced subplot, we get to know that she isn't/wasn't always just adorable, but that still doesn't give her character real depth. Nevertheless, it is more problematic that the love story between her and Alan, played by Babyjohn Choi ("Vampire Cleanup Department") becomes the movie's focus. Even though, there is hardly any chemistry between the two. 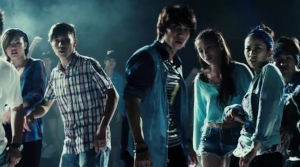 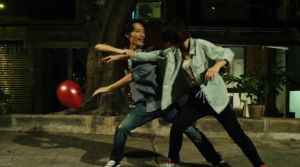 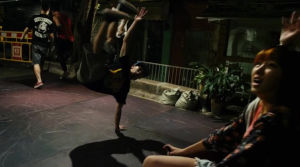 But in general, the characters are likeable and there is no real villain. Some of the people have their flaws, but friction actually only arises in form of the unnecessary love story. "The Way We Dance" wants to convey a positive look on life, and in the end, it manages to do so, even though, as I said before, the script mainly consists of well-established motifs and archetypes. Here and there the movie is a bit bumpy, for example when it comes to the aforementioned subplot. By the way, there is no real suspense curve either. Are we supposed to be interested in whether BombA will eventually defeat the professional dance group during the showdown? At the end of the day, it's all about having fun and being recognized by other artists. This is where the movie takes a wise direction in the end. However, the movie still lacks a little bit of suspense. It took me until the second half, but from this point onwards, the movie was able to win me over. Nevertheless, there is still hardly anything new here. Next to a few small, original ideas, we get well-known motifs and developments until to the finale. If that's enough for you, you'll get an energy-loaden flick about hip hop dancing.