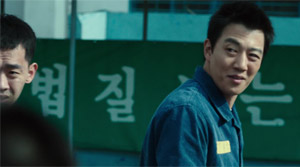 Story: Song Yoo-geon (Kim Rae-won) is a former detective and is put into prison since he is corrupt and violent. Because of his nature and his former profession he soon clashes with his fellow inmates. However, he always knows how to defend against them. That is until he runs into Ik-ho (Han Seok-Kyu). He is the one pulling the strings in prison and he soon sets some boundaries. Ik-ho can supply anything in jail which is why he is the actual boss there. Prison director Kang (Jung Woong-in) is also on his payroll. Thus, Ik-ho can lead an extraordinary, respectable life in jail. Not only that, but because of the corrupt director he manages to amass more and more wealth. He plans drug deals and robberies in prison. Eventually, Yoo-geon finds out that it's even no problem for Ik-ho and his men to leave the prison walls every now and then if one of their many deals should demand it. The former detective finds out that it surely has some benefits to be on good terms with Ik-ho. And then Yoo-geon seizes his opportunity to get a place at Ik-ho's side. The gangster boss might still not fully trust Yoo-geon, but at some point he even owes him his life. 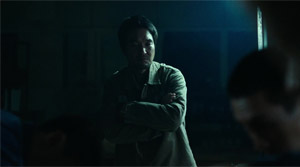 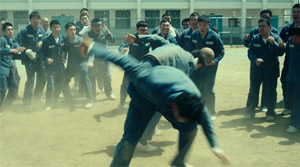 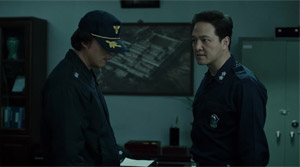 Review: The plot of a movie like "The Prison" is so well-known that it almost seems like brashness to not provide us with some sort of interesting twist. We get exactly the kind of "undercover cop goes to jail in order to bring to justice a gangster boss"-story the movie seems to feature right from the start. How Ik-ho can't look through Yoo-geon's plan right away - or maybe he does and just pretends to be without a clue? - remains a mystery, as is the case with Yoo-geon's questionable "plan" to pull this off. So the story doesn't necessarily speak in favor of this action thriller, but the actors and the action do. Furthermore, the movie has quite the violent tone in store which brings the needed amount of tension to the game. Despite all that the story really would have benfited from some more developments. The movie all in all remains too predictable. 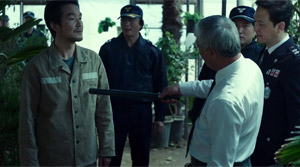 It would have been an inventive idea to make the relationship between the policeman and gangster boss a bit more three-dimensional by letting the two weave a close bond of friendship. But that's impossible since Yoo-geon is simply driven by his desire for revenge. On one or two occasions it actually shines through that the relationship between the two could have turned out more complex, but in the end this isn't made use of and that makes "The Prison" look unnecessarily flat. At least the events remain captivating. The violence within the prison walls makes every day become a fight for mere survival, even though Yoo-geon constantly treats dangers lightly, probably in order to prevent the movie's tone to become too dark. Still, this also makes the question pop up whether or not director Nah Hyeon wanted to play it safe, aiming at winning over as big of an audience as possible. 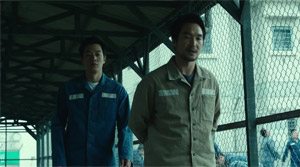 Exactly the same can be said about the violence in the picture. Although there is no doubt that "The Prison" is full of gruesome murders, as there are a buzz saw as well as a waste press involved, the director makes suprisingly little use of blood. Showing a little bit more wouldn't have been bad since this way the thriller would have been elevated to the level of good, old Hong Kong flicks. The undercover aspect of the plot could have turned out to be more thrilling as well, like in the poster childs of the former British Crown Colony, but director Nah Hyeon misses this opportunity. In his debut work - he already wrote the screenplay for "Forever the Moment" among others and also co-wrote "My Way" - he proves to actually have a sense for getting a lot out of his actors. Since the story is quite shallow it also has been pretty necessary to push the tension between the protagonists some more. And the director succeeds more or less. 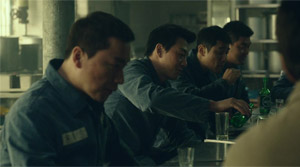 While Kim Rae-won ("Gangnam Blues") at least in the beginning makes us doubt whether he really is an undercover cop, even though the screenplay never leaves any room for interpretation, Han Seok-kyu ("My Paparotti") plays the villain with flying colors, making his power and inviolability almost physically tangible. Only towards the end the acting is a little bit too much. Speaking of "too much": Sometimes the score pushes itself to the foreground too prominently. It never gets annoying, but it still becomes pretty clear that the director wants to showcase "The Prison" as an epic-scale revenge thriller. This also becomes apparent with the admittedly impressively captured fire during the finale and the following slow motion sequence which is supposed to give us time for reflecting about what Yoo-geon had to go through in jail. 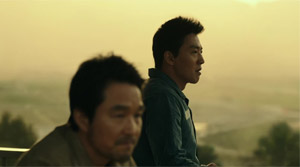 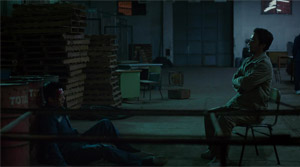 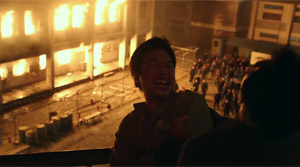 Moreover, the movie is simply too long. Ultimately, this also means that some of the fights are repetitive and the showdown is even outright disappointing in this regard. Apart from that this picture is very heavy on testosterone, particularly since there is no woman to be seen with the exception of a tiny scene in the beginning. When the dust has settled at the end it becomes clear, though, that this flick turns out to be rather generic, despite its good entertainment value, which especially the unspectacular script is to blame for. Besides that, concerning the undercover aspect of the story, there certainly could have been more thrills in the movie. The cat-and-mouse-game is implemented to a negligible extent only. The bottom line is that "The Prison" might be pretty entertaining, but in the end it becomes clear that there is a lack of real substance. However, for a revenge thriller the movie works well enough.