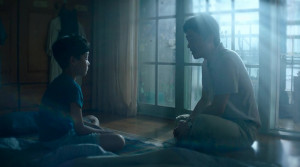 Story: As a young boy, Yong-hoo lives alone with his father, who is a religious person and a policeman. His mother died while giving birth to him. One day, his father is critically injured during traffic control and is in hospital, so Yong-hoo goes to church and prays for his father. But God does not answer his prayers and his father dies. Twenty years later, Yong-hoo (Park Seo-joon) is a famous MMA fighter. Whenever he sees a crucifix, he becomes both sad and incredibly angry at the same time. Recently, he also started hearing voices. To make matters worse, he suddenly has an injury in the palm of his hand which is bleeding constantly. The doctors can't help him, so he goes to a shaman. She explains that there are demons surrounding him, but there is also his father's ring which is protecting him. In the rice, that the shaman pours out to show Yong-hoo the way, he sees a cross again, and so the woman sends him to a priest. The priest is in the middle of performing an exorcism and would probably even have died if Yong-hoo had not shown up. With the blood of his wound, the MMA fighter manages to drive the demon away. The priest introduces himself as Father Ahn (Ahn Sung-ki) and blesses Yong-hoo's apartment as a thank you. So now, after a long time, Yong-hoo can finally sleep through the night without having nightmares. When Yong-hoo brings back a cross, which the priest secretly left with him, he goes along with him on another exorcism. The demon there claims that he is responsible for the death of Yong-hoo's father. But the "Dark Bishop" Ji-sin (Woo Do-hwan) is the one actually pulling the strings in the background... 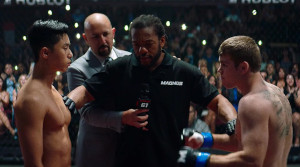 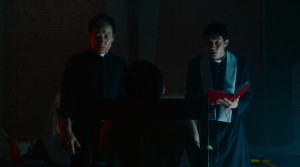 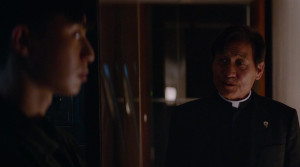 Review: A horror movie focusing on exorcism while one of the two heroes is an MMA fighter? And if you then find out that in the finale Yong-hoo even has a fist flaring up with divine fire as a weapon, this could certainly arouse some interest. It sounds trashy and cool at the same time. And that's exactly where you have to ask: Does the movie want to mix up the well-known devil-possession horror theme with some self-deprecation thus creating something new, or does the movie want to take its horror roots seriously? Hopefully the first? Nope, we get a pretty classic horror flick here, which - even though it does have its own flair due to the unusual action elements and the reluctant heroe - just doesn't quite feel right because the story simply takes itself too seriously. A clear case of identity disorder which sadly destroys the potential of this crazy story. 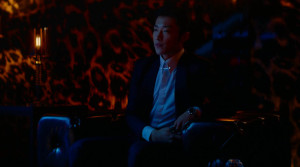 First of all, it should be mentioned that for a horror movie "The Divine Fury" simply lacks heart-stopping and scary moments. There actually are some nice ideas, like the shadow play on the wall while Yong-hoo sleeps and is haunted by demons. Or an excellent child actor who portrays an obsessed kid hissing menacingly and using animal-like movements, which contributes to the dense atmosphere. Yet, there are no real horror moments. But how could there be any if the hero of the story is actually able to simply show up, daze a demon with an uppercut, and then finish him off by using the blood of his stigma? This is exactly where the movie should have continued to follow its path. Even if the atmosphere may be quite gloomy at times, with its polished images of a nightclub the movie actually reminds us more of current action flicks. So why not simply take the trash factor of the MMA fighter taking on demons and turn it into a strength? That's not what we get, instead the movie puts a lot of emphasis on the characters, and on Yong-hoo's internal battle with his lost faith. 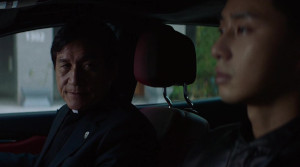 At least it seems as if director Kim Joo-hwan intended to focus on Yong-hoo's problem with God caused by the death of his father. But for that the dialogues are not a good basis. They get caught up in trivia which might have been supposed to make the characters a little more three-dimensional, but in the end, they only drag on the movie unnecessarily. With a running time of 129 minutes, the story is also told much longer than it has any right to be. This impression gets stronger if you look at the movie's narrative arc, which is built on one exorcism happening after the other, without barely any new findings coming to light. With "Midnight Runners" director Kim Joo-hwan previously created a small but impressively entertaining comedy thriller, and for his new project he brings back his lead actor Park Seo-joon. Unfortunately, Yong-hoo remains cold and withdrawn most of the time. His hatred is more of the smoldering kind, and the fact that the priest is able to identify it so accurately is pretty surprising. It is also the priest who, using words, wants to make it clear to us that the MMA fighter is actually a good guy who has only strayed from the right path. It would have been nice if the director had just shown instead of told us all of this. 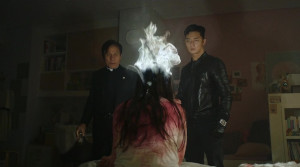 Veteran Ahn Sung-ki ("Unbowed") has to take on the thankless task of bringing more depth to the movie. With the dialogues written for him, this is not an easy task, though. At least, he manages to carry the potential father-son relationship with Yong-hoo, which makes their relationship the most interesting aspect of the horror flick. In addition, the priest's battered body shows us that he has been fighting this battle for a very long time, and that he will soon be at the end of his ropes. The fact that, despite everything, he shows strength and unyieldingness in the face of evil, makes him an impressive personality. But this also makes it all the more frustrating that we do not get to know more about his past or his personality. Instead, we find out at the end that the filmmakers plan a sequel with one of his assistants. But he only has a supporting role in the movie, and he does not even have any MMA skills to show off! So, what is such a simple "The Exorcist" rehash supposed to bring to the table? But back to the actual movie: The villain could not have turned out any flatter. He worships the devil in the basement of his club and, thanks to a ritual, he is allowed to compete against our hero with the scale armor of a snake. 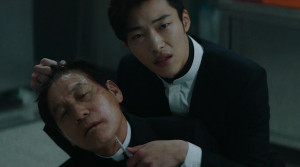 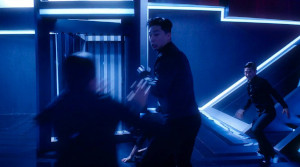 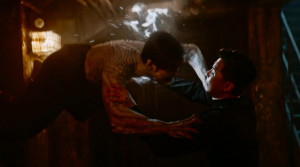 I actually expected a lot from the action. Apart from a fight in the club, which was at least shot without any cuts and therefore required a lot of planning, there is no particularly great choreography. Yong-hoo throws punches and that's it. Now, of course, you could argue that MMA is actually designed for effectiveness, and you should not expect acrobatic maneuvers, but the fights are just dull. Even towards the end when Yong-hoo's fist is armed with a sacred flame. So, ultimately, the feeling remains that "The Divine Fury" simply takes itself too seriously and therefore ruins some of its fun factor. There could have been an entertaining action flick hidden in there somewhere, but for that the atmosphere aims far too much for horror and drama without actually delivering in these areas. As an exorcism movie, the flick is by no means original and uses well-known clichés instead. The script is certainly not the movie's strength, and so it should have focused on the action elements. But that's not the case either. So, the only thing left having sort of nice entertainment value is the somewhat unusual friendship between the two protagonists. But it's not enough.