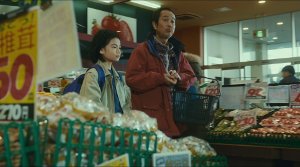 Story: Osamu (Lily Franky) goes to a supermarket with his foster-son Shota (Kairi Jyo) and together they steal all the products they need for their daily lives. With his earnings as a day-worker Osamu can't support his family, despite the fact that he and his girlfriend Nobuyo (Sakura Ando) live with an old lady called Hatsue (Kirin Kiki), who took the strangers and her granddaughter Aki (Mayu Matsuoka) in. Hatsue receives a small pension, but even though everybody pitches in - Nobuyo works at a laundry shop and Aki at some kind of a strip bar - the family doesn't always manage to make ends meet. Even though they are not related by blood, there is a strong bond between the family members. Hatsue chose this family because now she can be sure not to die alone, and the others feel safe in this alliance as well. One day, on his way home, Osamu sees the little girl Yuri (Miyu Sasaki), who sits outside in the streets, hungry and freezing. He takes her home with him and after the family finds out that her parents abused her, they decide to take the little girl in. Osamu thinks that Yuri has to make herself useful as well so that she can feel like she deserves her new place in the family. However, Shota is unhappy about his new shoplifting accomplice. But as usual, the family eventually finds a solution. It seems only a question of time, though, until the self-professed family is found out by the authorities... 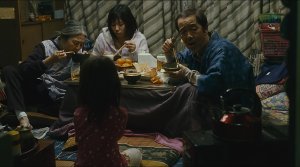 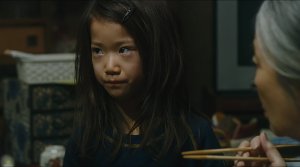 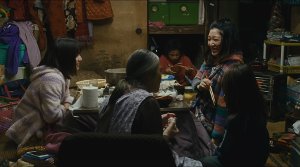 Review: With the Palme d'Or "Shoplifters" won the biggest award at the 2018 Cannes Film Festival. Critics came thick and fast with praise and with its calm yet honest tone the film seems cut out for winning over critics. Director Hirokazu Koreeda is no newbie, he has made movies for some time now and uses them to take a closer look at the construct of "family", for instance with "Our Little Sister" or "After the Storm". Especially the latter, stood out with something that most movies with this topic lack: a certain warmth despite all the worldly wisdom, which is nicely veiled in a well-written script. Whoever saw other movies by the director will agree when I say that "Shoplifters" is, by no means, the director's best movie and it seems more like Hirokazu Koreeda received the Palme d'Or substitutionally for another one of his works. Of course, this doesn't lessen the movie's existing qualities. 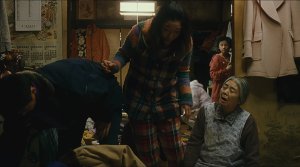 However, you still get the impression that the director created his newest work with the intention of modelling it after an art house movie, just to make sure he gets the prize. Everything just seems a little bit more severe and heavy with meaning. Unfortunately, there are not as much incredibly fascinating aspects to the characters as you might have expected at the beginning. Of course, there are things here and there that are interesting, but a lot of it is just hinted at or simply remains unsaid. Naturally, you can choose to only insinuate Osamu's and Nobuyo's past, but that also means that the two don't grow on you that much as you know that there might be a dark secret lurking beneath the surface. Apart from that, Osamu forces the kids to steal and that's not exactly likable. Once more, Hirokazu Koreeda did not only just direct the movie, but he also wrote the script. And even if you don't exactly expect likeable characters in his movies, they should, however, seem human. There are only a few scenes during which the family's warmth really comes out, though. 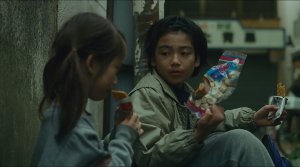 Surely, you might want to point out now that this criticism is possibly going into a wrong direction as it could have been the director's intention to portray ambivalent characters. But most of the time, "Shoplifters" sits so heavily on your stomach that you have to ask yourself if this is really necessary. Especially because the director's strength is creating moments during which he depicts people's warmth despite everything bad in their lives, he shows the characters' imperfections and their complicated relationships. There is no doubt that he managed to get brilliant performances out of his cast, especially the child actors know how to impress, but as a viewer you are actually just gloomy all the time. What is praiseworthy, though, is the fact that the filmmaker never tried to perfectly construct a scene for the sole purpose of getting the viewer to shed some tears. He let's reality do the work for him and in the end, this cuts deeper than anything melodramatic could. 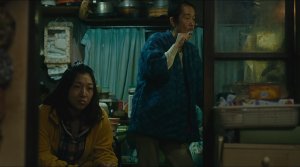 With Lily Franky ("Scoop") and Sakura Ando ("100 Yen Love") the director found a good foundation for the movie and the two protagonists represent anything but good parents. However, they are aware of it and try to give their kids the kind of love they can actually offer. And this is more than the kids' real parents ever did, and most importantly, it is an honest love. Nevertheless, you get the impression that it is not an unconditional love. Everybody has to pull their weight. And should one of them be gone at some point, everything the person owned will be divided amongst the remaining family members. Especially one scene gives you an insight into this kind of group mentality, which aims at showing that they are stronger as a group than they are as individuals. If somebody drops out, that's just the way it is. This form of pragmatism stands in stark contrast to the general idea of family love. Here, the director once more uses fascinating ideas and motives in his movie. 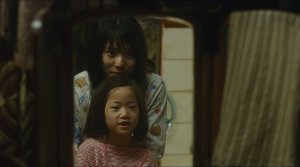 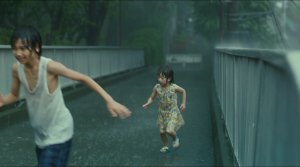 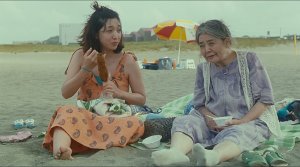 In addition, this also makes the movie a little bit heavy-handed and bleak. Hirokazu Koreeda focuses on a natural pacing in his movie. The rhythm of his images mostly stays the same, while new insights and twists are presented with a certain kind of stoicism that is almost impressive, but it also makes the movie a little bit lengthy. Towards the end, events come thick and fast, but at the same time the pace somehow stays the same. The same kind of rhythm for too long can get very tiresome. Nevertheless, "Shoplifters" is pretty interesting because it shows a family whose members got together because of their own free will and the family is anything but perfect. In addition, the movie's ending gives you a nice punch to the gut. However, that is exactly why you are left behind a little bit broken inside and you have to think to yourself that this is exactly what all those other directors, who "hang out" at film festivals, usually do. With his pleasant touch of warmth, Hirokazu Koreeda normally creates the kind of movie magic that is pretty rare nowadays. Maybe, because I found this kind of magic to be missing in "Shoplifters" it didn't impress me all that much, even if it is, without a doubt, a very well-done drama.