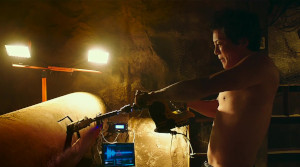 Story: Jeob-sae (Eum Moon-suk) poses as the drilling expert Pin-dol-i and tries to drill a hole in an oil pipe in order to illegally tap oil. Something goes wrong, though, and there is a small explosion. His employer is far from pleased about this and now they are looking for the real Pin-dol-i (Seo In-guk), who is then called on for a much larger job. Together with a team, he is supposed to dig a tunnel to two adjoining oil pipes, which he should then tap. After that, the oil will be pumped into huge water towers, which are soon to be demolished. That's why the drilling expert does not have much time. His employer Geon-woo (Lee so-hyuk), who owns an oil refinery and who has plunged himself into debt, provides Pin-dol-i with a team. One of the team members is even Jeob-sae. Pin-dol-i doesn't get along with him at all and the other team members don't really work as a team either. Nevertheless, together, they still try to dig a tunnel in an abandoned hotel, which they are not allowed to leave for weeks. Not only their boss gives them a lot of trouble and keeps an eye on their every step, but the police also start to suspect something. At least Man-shik (Bae Yoo-ram), who has wanted to catch Pin-dol-i red-handed for a while now, has a good intuition and is a constant threat to the secret operation. Soon, however, Pin-dol-i and his team also have to ask themselves whether their boss is really straight with them and they actually get their money in the end. 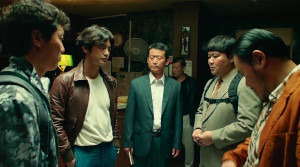 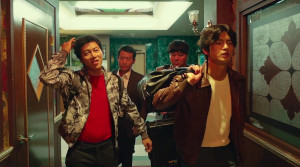 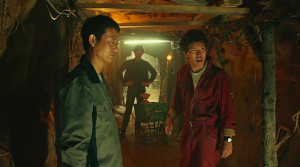 Review: First of all, the movie's premise is pretty surprising. Robbing a bank, blackmailing, fraud with artwork, all this is common practice in the heist genre, and has not won innovation awards for a long time. Drilling oil pipes, on the other hand, is something that is probably less common when it comes to the perfect heist. You immediately want to research whether or not, and if so, how often, something like this has happened before on a large scale, but right from the start the movie makes sure to let us know that the story is fictitious and not based on any true events. But "Pipeline" promises to have its very own style and that's what we get. Nevertheless, I now have to utter a sentence that critics have to say far too often: Unfortunately, the movie completely wastes its potential. On the one hand, this is due to the fact that the characters needed to be fleshed out more, but on the other hand, it's the script's fault as well, because, in the end, it tries to unnecessarily complicate a simple story just for the sake of its genre. 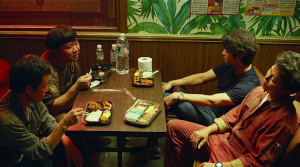 Director Yoo Ha has already created an outstanding gangster movie with "A Dirty Carnival", but he has lost some of his class over the years, which movies such as "Gangnam Blues", and above all else "Howling" have shown. With his latest movie, the filmmaker dabbles a little bit in the comedy genre. At least that's what the setup suggests. The group of people that is supposed to tap the oil pipeline is a mixed bunch, and no one can really stand the other. In addition, something is constantly going wrong, and they have to improvise. The noise caused by digging the tunnel makes for some very suspense-packed scenes in which the police become suspicious, and sometimes everything goes into a pretty chaotic direction. But especially the movie's comedy potential was not fully tapped. At first, this does not seem quite that bad, because the humor could easily have turned silly - just as the unnecessary scenes during the credits prove -, but it later turns out that this should have been the movie's foundation. 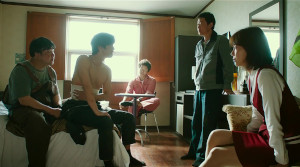 Ultimately, the question remains whether "Pipeline" actually wants to be a comedy at all. There are indeed some deaths, but the tone mostly stays pretty light-hearted, even in the face of great danger. Eventually, you can get used to that, but you still wonder why the comedy tendency was not fully embraced and implemented more consistently. For example, there's the villain: He is probably the worst employer you can imagine, because he wants to see results, preferably the day before yesterday, but he is also the one who puts a lot of obstacles in the tunnel diggers' way. Why? This is completely absurd and could have been exploited for humorous purposes. But since this does not happen, it looks like a major weakness of the script. If the villain cannot be taken seriously, then perhaps the policeman, who has an amazingly good nose in the case, can? That's not the case either, nobody around him really listens to him, but the movie does not make use of this for any funny moments either. 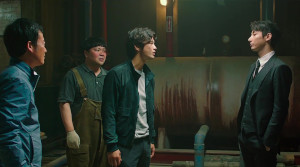 So the tone in "Pipeline" remains light-hearted, but there are no real laughs. It's not as if there are no funny scenes at all, but they sometimes just seem like an afterthought. Instead, this heist movie, which at first may not seem as one at all, later clearly follows the guidelines prescribed by the genre. Pressure gets built up, the heroes hardly seem to have a chance to get out of there rich or even alive - also because of a traitor in their own ranks -, but then of course, there is a twist and they have another ace up their sleeve too. But that's not all. There is even a rather out of place mass brawl, with which director Yoo Ha probably wanted to build a bridge to his earlier works. Or maybe he just wanted to put some action into the movie. That would not have been necessary, though, especially since he also puts a little humor in there, but does not have the guts to really bring a comedy to the screen. 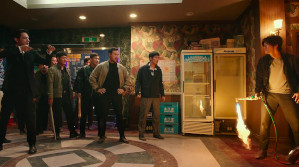 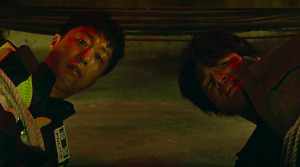 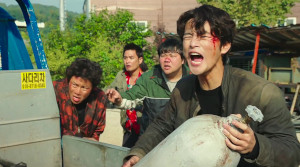 Unfortunately, the individual characters are not exactly three-dimensional. They are just archetypes who you can quickly root for, but soon you realize that you hardly know anything about their true personalities. There are enough interactions between them, but they lack depth, and you even get the feeling that most of the work is done by the actors and that the personalities could have turned out even flatter without them. So, praise to the actors. At least director Yoo Ha shows a good eye for directing when he uses a few imaginative transitions between the scenes. The end product is gripping from start to finish, but as you approach the end, there is some disappointment setting in because you feel like you have just gobbled up some fast food. This stands in stark contrast to the unusual premise that you will certainly not forget for a long time. Thanks to that, Yoo Ha should have had it easy to put together a nice comedy, but he didn't recognize the story's strength and so he created a decent but also forgettable heist movie instead.