Story: Noriko (Kazue Fukiishi) is seventeen and has to think about which university she is going to attend. She isn't happy in the little suburban town she lives in with her family, something is amiss and she believes to find this something in Tokyo. But her father Tetsuzo (Ken Mitsuishi) doesn't want to let her go. Therefore, one day during a blackout she decides to pack her things and leave home. She arrives in Tokyo where she meets the girl Kumiko (Tsugumi), who she knows for a while already from a chatting site that is said to be the place where some teenagers have founded a suicide club. Kumiko takes her in right away and also introduces her to her job. She takes on the role of familiy members, which she is paid for by lonely people. Noriko leaves her old identity behind and from that day on calls herself Mitsuko. After a while Noriko's sister Yuka (Yuriko Yoshitaka) leaves the parental home without a word as well. She follows the trace of her sister and eventually works for Kumiko, too. Tetsuzo finally decides to look for his two daughters, but are they really still his children?

Review: Director Sion Sono's exploration of inner emptiness goes into the next round with "Noriko's Dinner Table". The movie is an inofficial sequel to "Suicide Club", even though it is perfectly watchable without knowledge of latter one, since it actually only shares that one's fundamental question of identity as well as sense and nonsense of life and features some cross references. This time growing up once again stands in the center of the story and it is a very painful process the way Sion sketches it. Responsible for that are the adults, who towards their children can't live up to the role that they actually have to fill out. And that's also what the drama centers around. Roles we have to play in life. And by doing so we once more need to answer the much beloved question of the director: Are you connected to yourself? 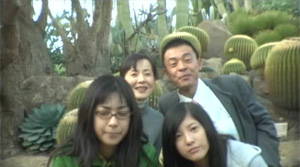 The story is told from the view of mainly four individuals, who also serve as narrators and often comment every single one of their actions. Sometimes this seems a bit unnecessary, but it also prevents the movie from having even bigger pacing problems. Because as it is the film is still rather lengthy with a running time of 160 minutes. Why Sion Sono had to give his movie such an epic scale concerning its running time remains unanswered. The movie may seem half an hour shorter than it actually is, but its overlong, nonetheless. The story is seperated into chapters, in which there is little to none repetition of already depicted events from the perspective of other individuals. Instead the director frequently gets lost in little details and anecdotes, though. 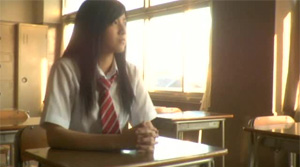 What "Noriko's Dinner Table" is actually about is difficult to pinpoint, as usually with Sion Sono. In fact he even wants to put several questions that aim for unraveling the meaning of life into the focus. Are we all just empty pages deep within, playing different roles for others? After all Noriko feels more emotional warmth in front of a stranger whose daughter she plays than when facing her own father. The emotional dullness that eventually results from that is portrayed by Kumiko, who watches disinterested when a colleague of her is being stabbed to death by a customer. What kind of future does Kumiko see for herself? It is one without hope and one filled with emptiness that brings the viewer to the brink of emotional exhaustion. It isn't easy not to get depressive as well thanks to the movie. And those who refuse to delve into that feeling will most likely gain only little out of this drama.

There is no doubt that director Sion builds a lot of social criticism into his movie. Partly he is doing so in a very pretentious and direct way. Interestingly enough, the scenes, in which the dialogs and acting of the characters are more abstract, forcing you to give thought to what the director's intention might have been, are more successful. And there are a lot of those scenes. Without a doubt the four protagonists are mentally ill individuals and it is a strange fascination that makes us want to get to the bottom of their pain and emptiness. We go on a trip that after all proves to be incredibly energy-sapping and dark. Particularly painful to watch is Noriko's desperate attempt to cling to her identity as Mitsuko even though she is nothing more than an empty vessel as that individual. 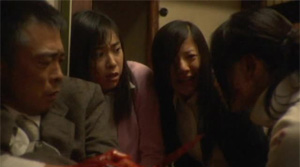 However, in the end it seems to be easier to be an empty vessel than feeling like one. Sion Sono oftentimes captures his deep afflicting drama in handcamera style and during some scenes also lets his actors play their parts in one single shot, which gives the emotions a special dynamic and credibility. Making up for the lengths of the movie, that constitute the major point of criticism, is a well done finale that goes very deep. The emptiness the protagonists feel is brought to screen very effectively and the audience has to be careful not to be infected by it as well. For those who want to avoid facing the serious questions in life or those that don't want to feel as if suddenly having to carry the burden of several lives at once after having watched a movie "Noriko's Dinner Table" certainly isn't recommendable. For everyone else, and despite it being overlong, Sion Sono's extraordinary trip justifies a definite recommendation.