Story: Tiger Chen (Tiger Chen) is taught an old form of Tai Chi by his master (Yu Hai). His master isn't happy with his student, though, since he has too little control over his chi. Chen is also working as a delivery guy until he enters a competition and doesn't only impress the audience. Donaka Mark (Keanu Reeves) is also interested in Chen. Mark is in strong need of a new fighter for his illegal underground fights. He offers Chen to test his skills while at the same time getting paid to do so. At first, Chen doesn't want to sell his martial art for money, but when his temple is about to get torn down as it needs to make way for new apartments as part of a redevelopment plan, he decides to earn some money in illegal brawls. However, he doesn't know yet that he is constantly recorded during his fights and serves as entertainment for a selected audience. He also isn't aware that his predecessor has been killed by Mark because he didn't want to fight to the death. That fighter also worked for police detective Suen Jing Si (Karen Mok), who wants to put a stop to Mark's evildoings for a while already. In the meantime, Chen more and more loses control over himself...

Review: So the star of the "Matrix" trilogy has chosen a martial arts film for his directing debut. Why not? And to the surprise of many (or maybe not) the end product is quite decent. What makes the movie so exceptional is Keanu Reeves' unusual mix of eastern martial arts flick and western B movie of the 80s and 90s. Reeves' homage to several classics certainly works, if you are willing to accept this sort of mix. Apart from that there is solid directing, where Reeves proves that he can adopt what he learnt from all the movies he played in, and great martial arts, which nonetheless wouldn't have suffered if there hadn't been so much wire-fu involved. Sadly, there are also a few aspects that are clearly on the negative side. 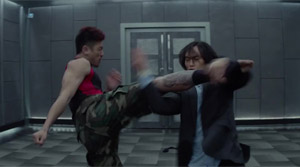 The mostly positive reviews of "Man of Tai Chi" are probably the result of the fact that no one really thought Keanu Reeves could pull it off. Reason for that is his most of the time outlandishly wooden acting and then again his tendency to overact on the other hand. You get to see a lot of that here, too, and sometimes it is almost hard to bear. As the movie's star he has also chosen someone who can't really exude the kind of charisma necessary for carrying the movie on his shoulders. Tiger Chen has worked as a stuntman for the Matrix sequels and as a martial artist he has been a great choice for "Man of Tai Chi". He also brings a surprisingly high intensity to the screen, which maybe is also the achievement of Reeves' directing, but as a sympathetic character he doesn't work. At least the darker elements of his character are pretty interesting. 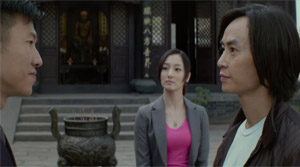 The wheel isn't reinvented here and deliberately not. At the bottom line we get an underdog story in which the hero strays from the righteous path and needs to find his way to inner peace. As already said the chaos and violence Tiger Chen more and more succumbs to is brought into the movie in an appealing fashion. Reeves is acting as the devil in the shape of a businessman who wants to pull Chen over to the dark side. However, the philosophical aspects of Chen's soul searching and his actual martial art style, Tai Chi, are unfortunately falling by the wayside. They are supposed to be illustrated by Chen's relationship with his master and in fact some of the movie's best scenes can be found here, but those moments are simply only getting a raw deal and all in all should have gotten more weight in the picture. Accordingly, the substance of "Man of Tai Chi" is taking a backseat to its B movie charm.

Apart from that there is also a detective story in which Karen Mok ("So Close") along with Simon Yam ("Nightfall") and Sam Lee ("Dog Bite Dog") in small supporting roles can be seen. Not one of them is in their element, but this isn't any worse than the awful looking CGI-heavy car crash. Because as already stated that B movie flair is also one of the movie's biggest selling points, although admittedly it sometimes remains just a weekness, too. Nevertheless, Keanu Reeves deserves some praise for his seamless mix of Hong Kong, Chinese and American action cinema. Technically the movie is top-notch, the soundtrack is fitting and the fights are great to watch. Reeves puts an extraordinary amount of energy into his movie and that is also reflected in some tough grappling moves. 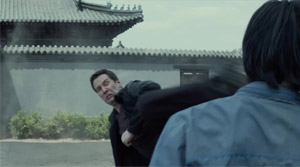 Yet, the finale is extemely disappointing since Reeves has written himself into the movie as the final opponent. Reeves seems to have aged a lot and many of his moves from his glorious days of "Matrix" aren't looking good anymore. The finale is even the more disappointing since Iko Uwais ("The Raid") could have had a great fight with Tiger Chen, but that clash is simply cancelled... By the way, Tiger Chen is showing more spectacular Wushu than Tai Chi, but the choreography by Yuen Woo Ping is excellent and one of the highlights is Chen's fight against Yu Hai, who has also played a master in Yuen's fantastic "Tai Chi Master", and Yu once again shows great application of Tai Chi. This sort of homage to classics of Chinese cinema by Reeves makes "Man of Tai Chi" recommendable to action fans despite a botched showdown.