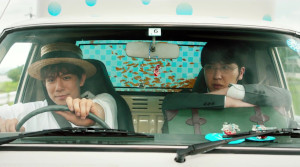 Story: Makoto (Matsuya Onoe) is a bank employee and after having made a mistake he gets sent to the countryside. There, the first person he meets is the goldfish dealer Noburo (Hayato Kakizawa), whom he immediately dislikes because of his friendly and open nature. Besides, Makoto is actually great at his job and therefore he quickly has the reputation of being a genius among his unambitious and incompetent colleagues. Having been transferred for disciplinary reasons, he wants nothing more than to leave as quickly as possible. But then he meets Yoshino (Kanako Momota), who runs an establishment where you can catch goldfish. Makoto is immediately in love with this woman, but he is just not a goldfish fishing person. Nevertheless, this is a very popular activity among the villagers. From now on, the bank employee tries to get closer to the woman, but this turns out not to be that easy. At the same time, it's part of his job to make sure that Asuka (Nicole Ishida), the owner of a café, becomes more successful in the future. Asuka is not hiding the fact that she has feelings for the bank employee, but he himself is still looking for a way to get closer to Yoshino. Then he also runs into the goldfish salesman Noburo again, and it turns out that he too has a role in the whole story. Despite some problems, Makoto inadvertently starts to feel more cheerful and he slowly gets better at expressing his feelings, which makes him grow as a person. 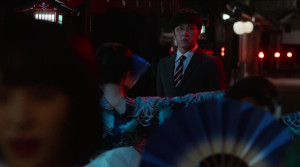 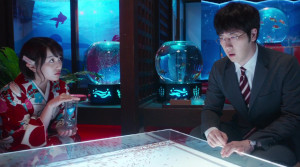 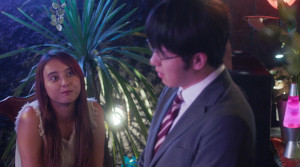 Review: Strictly speaking, "Love, Life and Goldfish" is a romantic comedy which is also a musical. That's why the movie will probably only appeal to a specific audience, and that's a pity, because ever since the outstanding "Memories of Matsuko", I also try to give movies from the musical genre a chance from time to time. Once again, this turned out to be a good idea, because while this movie, which is based on the manga "Sukutte Goran" by Noriko Otani, is certainly about love, its story also revolves around a bank employee who, thanks to music, slowly opens his heart and is able to see things in a different light. Village romance also plays a part here. The flick's theme can certainly be described as stereotypical, but the implementation is pretty well done, and especially visually the movie looks brilliant. 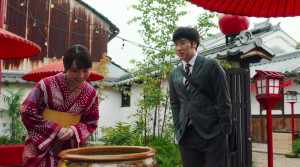 It's not only the beginning with the lush green colors of the fields and the vibrant sets, such as the café or the goldfish parlor, that prove how much more you can get out of a movie with an excellent cinematography. But there is also a thematically fitting and visually impressive collage of Makoto running errands from a fisheye's perspective. Everything looks warm and inviting thanks to the lighting and colors. Of course, other movies made sure that we are already familiar with the concept of the village being a place that seems boring at first, but then turns out to be much more lively and charming than the city. Makoto obviously represents the antithesis of this place, because for him everything revolves around cold facts and most notably, around numbers. At first, he seems reluctant to stay in this village, but he has no other choice, and when he then meets Yoshino and she immediately turns his head, he seems to slowly come to terms with this quiet place. 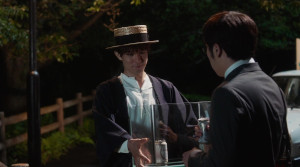 What's fascinating in this movie is the fact that, apart from the most important people and Makoto's colleagues, no one in the village has a face - at least none that we get to see. As they are covered by fans, kimono sleeves (they even did a great job with the costumes here) or similar things. This gives the story a more personal touch and our attention stays focused on the relatively small number of characters. Here, it stands out that the casting staff was not only looking for people with charisma but chose actors who could both sing and play an instrument. In addition, the characters have something mysterious about them, Yoshino, played by Kanako Momota from the girl group "Momoiro Clover Z", for example, seems to carry some kind of pain with her, while Asuka already had some unpleasant experiences with the city. So, it doesn't come as a surprise that Noboru, played by Hayato Kakizawa ("Kaiji 2"), also has a secret. 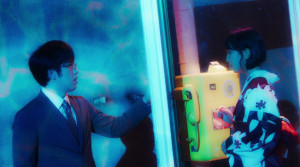 While the story may indeed be a little cliché-ridden, the ending is not quite what you would have expected it to be, and yet it still leaves us with the anticipated warm feeling - even though the movie ends a bit too abruptly. But at least we get warned that the credits might roll soon in one of the numerous moments in which the musical jumps on a meta level. With its meagre 93 minutes this rom-com musical is actually surprisingly short, and somehow you would have wished to stay a little longer in this pleasantly warm world. In the end, however, you have to be grateful that director Yukinori Makabe decided against stretching out the story, because the running time is more than enough to convey the most important messages. And even though the other characters could have used a little more fleshing-out, Matsuya Onoe as Makoto is able to portray his character development believably. Therefore he creates a common thread for us in the story. 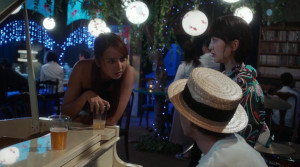 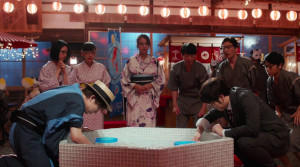 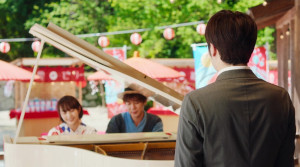 Makoto has closed-off his feelings for a long time, results are what matter to him the most and not unnecessary interpersonal chitchat. At the same time, though, he is lonely and gets quickly moved when Asuka, for example, tells her story in a song. Makoto bottled up his feelings for such a long time that they now simply burst out of him, and so he often talks to himself without realizing it - sometimes in a way that's close to rapping. Humor makes up a huge part of "Love, Life and Goldfish", next to the music, and of course the movie is also about love. But thankfully none of it happens on a cheesy teenager level, so the flick can actually be recommended to a broader audience. Same goes for the music. Although many pieces are rather slow and pop-rock driven, the music also includes numerous other genres, or at least offers some variations, so that we get a nice selection. While the music might not necessarily make you want to buy the soundtrack, it still reflects the flick's warm and cheerful tone very nicely and enriches the movie. "Love, Life and Goldfish" certainly tells a well-known story - with a nice goldfish metaphor as a bonus -, but it does so in a slightly different way and most notably, with a lot of heart.