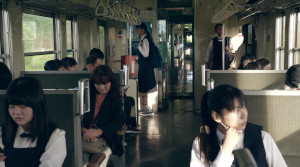 Story: Ito Soma (Ren Komai) is not a normal high school girl, since she talks very little at school because of her strong Tsugaru accent and so she has no friends. She lives with her father (Etsushi Toyokawa), a professor specializing in the Tsugaru dialect, and her grandmother (Yoko Nishikawa). From her grandmother, Ito learned how to play the shamisen, a three-stringed traditional plucking instrument. But in her everyday life this is not a very useful skill, and so she has not practiced playing it for a long time. On a whim, Ito then applies for a job at a café whose theme it is to have the girls welcome guests in full maid uniforms. Ito not only wants to top up her pocket money by working there, but she also hopes to become a little more outgoing and socially agreeable in the process. At her new job, she has lovely colleagues who stand by her side, but her father is not thrilled that she works in a café which is a cheap copy of countless similar establishments in Tokyo. Ito has never had a reason to rebel against her father, even though the family situation has not at all been ideal since the death of her mother, whom Ito hardly remembers. But now she seems eager to fight for being allowed to continue working at her job. Unfortunately, the café itself soon has to face some problems as well... 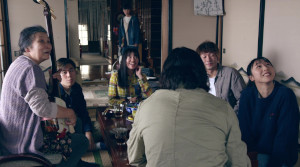 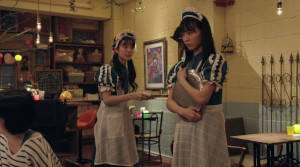 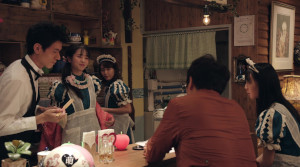 Review: "Ito" is an inconspicuous comedy-drama that, contrary to expectations, has a lot to offer in terms of subject matter. It is about a girl who is searching for her identity and wants to rid herself of her otherness, which is most notably shaped by her introversion and her dialect. With that, the story can also pick up on the color of the Tsugaru dialect, and it wants to make you aware of the fact that with the loss of dialects, tradition and culture are dying out too. "Ito" is also so engaging because, unlike with art house dramas, we are actually able to maintain a certain closeness to the events and characters. Moreover, its not just a gloomy drama, instead we also get humor and some warmth that lightens up the inner struggle the girl faces growing up. Because of that, the movie just flies by, even though there is seemingly nothing extraordinary happening. 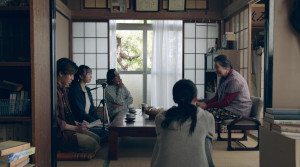 But Ito's problems, for that matter, are all the more real. We dont get any tragic scenes and also no protagonist squirming with pain forced upon us. Instead, Ito has to deal with the natural problems of her life. Although her father never wants anything bad for her and even allows her to do her part-time job at first, she starts to distance herself from him, because he is a professor of an almost extinct dialect and therefore embodies exactly the kind of world she wants to get away from. At one point, Ito even genuinely opposes her father and there is a quarrel unfolding. However, the fight also gets somewhat ridiculed, not least because of the grandmother, and it actually helps to avoid needlessly pushing some tragedy into the story. This is very refreshing, just as much as the fact that the story about the dead mother is not at all used as tearjerker. And yet, Ito still has a few images of her mother in her mind, which come to the surface at some point, so that she can actually shed a few tears by herself. 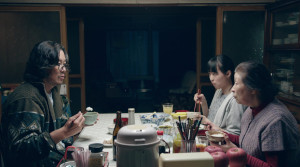 Ren Komai undoubtedly shoulders most of the work, and she manages to appear likeable, even though she is actually quite introverted. Her stuttering, as she cannot bring herself to say a simple greeting without her dialect, is just as endearing as her sudden attempt to make friends with someone who repeatedly said goodbye to her on the train from a distance. Etsushi Toyokawa ("Platinum Data") portrays an interesting character as the father, because the professors thinking is still so traditional that he even lives with his mother-in-law, although she would have no problem living alone. In general, Ito's grandmother is a depiction of an uncomplicated woman who has already been through a lot, and yet still somehow fights her way through life with a certain ease. In addition, actress Yoko Nishikawa plays the shamisen excellently. 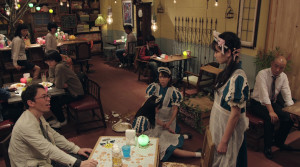 The lead actress also manages to draw some sweet tones from the instrument, and the somewhat imperfect playing  as far as I can judge that - gives the whole thing a certain authenticity. When Ito plays the instrument at the end - and this much should be clear from the start , she puts her heart and soul into it and her skills are on a completely different level. It is the first time since her childhood that the girl decides to play on her own behalf. Before that, the traditional instrument represented everything she wanted to get away from. Through her work at the "maid café", however, she learns that being different does not have to be something bad, as she gets to know some other colorful personalities there. Even though it is a normal café in other respects, one scene also addresses the fact that women are sexualized here. At the same time, there are some "oddballs" who immediately want to found an association to protect the girls from minor attacks. Yet, as one of Ito's colleagues explains, they forget that they also belittle the girls with that, as they assume they needed protection. 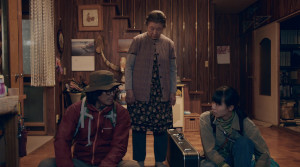 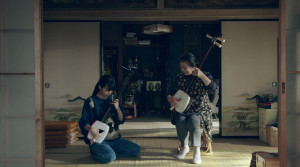 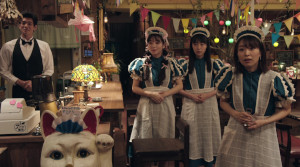 So it should have become clear by now that, within its rather simple story, "Ito" also has a lot of goods to offer. Just like the rest of the movie, the directing job is quite inconspicuous, but completely fulfills its purpose, and some longer shots also offer the actresses the chance to bring a certain dynamic into the movie. Generally, it is the good acting performances that carry the movie and make the story unfold so pleasantly smoothly. Thanks to the subtly placed humor and the constant developments, there are no long-winded scenes, which can't be said about similar dramas. It is also fascinating that "Ito" actually only shows an excerpt from the protagonists life, but the movie still feels self-contained. The ending fits with the rest of the story and leaves you just as satisfied as you had hoped.