Story: Sumida (Shota Sometani) is fourteen and visits junior high. Together with his mother he is running a boat house, but only few people come to lend a boat. Yet his father, who has left him years ago, often turns up drunk, searching for money and letting his son know that his life would be so much better if he were dead. On the property of the boat house there are a few other people living in tents, who have lost their homes because of the Fukushima disaster. They try to help the boy wherever they can, especially Yoruno (Tetsu Watanabe), who tries to dig up the money that Sumida's father owes the yakuza, but Sumida doesn't want any help, also not the one of his classmate Chazawa (Fumi Nikaido) who adores him for a while already. When Sumida's mother leaves with another man, too, the boy decides to drop out of school and take care of the boat house on his own. Chazawa is more and more worried about Sumida and helps him even though she is treated bad by her love interest. But the crisis centering around Sumida's father culminates and it doesn't take much anymore for Sumida to suffer serious mental damage.

Review: "Himizu" is based on the manga of the same name by Minoru Furuya, but shortly before the shooting began the Fukushima earthquake and the following disaster hit Japan. Director and screenwriter Sion Sono ("Guilty of Romance", "Love Exposure") quickly rewrote the story a bit and therefore reflects in the background about the events in Japan and how the country deals with the disaster. This sociocritical element is intriguing, but actually the drama is about a boy who is abused and searches for his place in the world. His self-esteem is tattered by his father, but there is still a certain kind of pride he preserved. However, the events alienate him and this view on the world full of hatred, despair and melancholy is what runs through the whole movie. Surprisingly you will also come across hope as well, though. 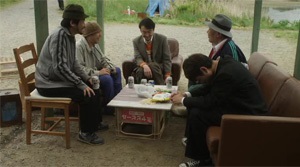 Making "Himizu" seem full of hope are the people that have found shelter near the boat house after their homes have fallen victim to the Fukushima disaster. They almost become something like a family and although Sumida is acting cold towards them and everyone else they still think it's their duty to help the boy, and during his free fall into complete lonesomeness he also sends a few help signals. Chazawa receives them in particular and although the boy apparently was never really interested in her anyway she approaches him only to be met with violence by him. Sumida has long passed the point where he could accept help from the outside world. He is too hurt and disappointed from the people. 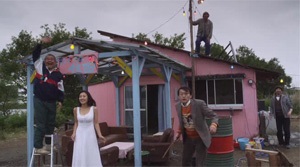 But after all there are still people who worry about him. How else could you explain that the individual cohabitants on the boat house property have dreams on several occasions in which Sumida commits suicide and try to prevent their visions from coming true? "Himizu" is a movie that is strongly carried by its in part very subtle emotions and demands a good acting ensemle. Shota Sometani as Sumida and Fumi Nikaido as his stalker (both also to be seen in "Lesson of the Evil") are certainly pushed to their limits by director Sion Sono, but it pays off. There are some very intense scenes which work particularly well because Sion often makes his actors play in a single continuous shot and sometimes also lets them improvise, bestowing something genuine and natural on the events on screen.

The director oftentimes shoots a scene numerous times until something special evolves from the kind of coincidence he is looking for. Despite this very exhausting working method the two lead actors deliver an impressive performance and you start to find your way in Sumida's psyche with almost unerring ease. The lead actors are supported by some familiar faces from Sion's former works. However, storywise it would have been desireable to see more of Chazawa. She always smiles when she stands before Sumida but we also get a short glimpse of her family ties which don't look that much better than that of the boy. Apparently the world is full of parents who believe that they would be better off without their children. 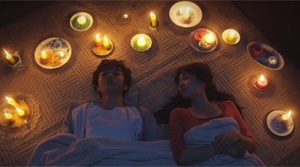 A few of the characters are a bit caricatural and furthermore the world seems to be full of madmen, but on the one hand this can't be called a true flaw since the original is a manga after all and on the other hand this is also what breathes life into the world depicted here. The melancholy is contrasted with a certain kind of optimism as already stated, but how the film might end eventually is absolutely open. No wonder, director Sion Sono made a decision at the very last moment himself. Unfortunately you can tell, and during some scenes the drama drags on unnecessarily, too. Making up for that the film scores with a few special moments that are the result of Sion Sono's own directing dynamic and an ending that feels honest and thus can be touching. Qualitywise, what the director shot here in three weeks most filmmakers can't even deliver in a year.