Story: Life doesn't look good for Captain Cheol-joo (Kim Yoon-seok). The financial crisis has hit him hard, his fisher boat, a rusty hooker, soon isn't his anymore and there is also his crew he has to provide for. Therefore, he decides to smuggle some Sino-Korean immigrants into the country. When he confronts his crew with his decision, not everyone is really excited about it, but you can't go against the word of the captain. Also, they are quite aware of how bad things are for them at the moment. When the fishermen take the illegal immigrants on board, one of the crew members, Dong-shik (Park Yoo-chun), sees the girl Hong-mae (Han Ye-ri) among them and instantly falls in love with her. The machinist Wan-ho (Moon Seong-geun) lets Dong-shik put her up in the warm engine room, but Chang-wook (Lee Hee-joon) and Kyung-koo (Yoo Seung-Mok) have also cast their eyes on the women among the illegal immigrants, while Ho-yeong (Kim Sang-Ho) tries getting his crew to focus on their task at hand. After all, a patrol boat could turn up at the horizon at any time. But suddenly things steer into a disaster, changing everything for the crew...

Review: "Haemoo" is an unsual thriller that works on different levels, but especially looks into the mental abyss of people facing extreme circumstances. The closed, or to be precise open space of a boat that is more or less carried from the outside world into some sort of otherworld - figuratively spoken, of course - creates a framework that gives the terror depicted a bleak note. A cleverly written screenplay is putting the characters into the spotlight as much as the madness they more and more drift into after a disaster unfolds. It's without a doubt also the effort of the good cast which adds to the success of this psychological thriller, but next to that the pictures manage to create a special atmosphere that instantly captivates. 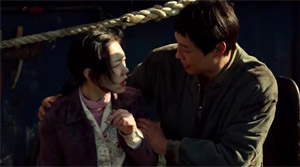 Being responsible for the script are Bong Joon-ho and Sim Seong-bo, who have already shared a pen for "Memories of Murder". While Bong has made a name for himself internationally, with movies like "The Host" and "Snowpiercer", Sim is giving his directing debut here. However, with Bong as a producer at his side there can't go much wrong, really. Accordingly, the opening scene is particularly impressive, showing us, tightly edited but in no way feeling obtrusive, the everyday lives of the fishermen. As things progress the pictures become darker and darker, though, reflecting the mood appropriately until they become outright nightmarish and along with the omnipresent fog create a decent amount of horror. This is also achieved through great editing and good camera work. 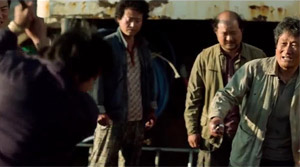 The lives of fishermen are tough and don't leave much room for unnecessary melodrama. This becomes quite obvious in the indifferent way the captain reacts when catching his wife with another man. It's also those moments in which Bong's cynical black humor shines through. Kim Yoon-seok ("Hwayi: A Monster Boy" , "The Yellow Sea") is capable of playing nearly everyone and everything, so that at first you can't be really sure whether he plays a likeable fisherman who is simply very straight-forward and goal orientated or if there is something more sinister creeping under the surface. The other characters are equally ambivalent. Somehow it's easy to describe every one of them as likeable in their own way, but you never know what kind of abyss awaits us under the surface.

However, "Haemoo" has the big problem that following the moment of the disaster, which you are expecting to happen from the very beginning, no real character development can be seen anymore and that's where the movie reveals a big weakness. Because a psychological thriller like "Haemoo" needs to work with more profoundly developed individuals with great psychological depth than what we are presented with here. Especially one of the constantly sexually starved fisherman becomes a mere caricature at some point. But other individuals are needlessly one-dimensional, too, and this even though they should stand out with mental complexity. Park Yoo-chun, who up until now only played in drama series, can't provide the depth of a story's hero. And Hong-mae is merely an important pillar of the screenplay, although Han Ye-ri ("Commitment") in fact succeeds in giving her a bit more color. At the bottom line it is safe to say that the two screenwriters have already delivered better in this respect. 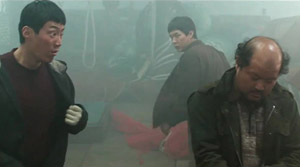 Still, gripping tension is guaranteed when humanity is lost focus of and the point of no return is passed eventually. Being loosely based on true events "Haemoo" excites mainly thanks to its meticulously crafted setting and a tense atmosphere as well as its fantastically nightmarish pictures. There is also some social commentary beyond it all, after all the fishermen are forced to do the smuggling because of the financial crisis and the dependency on the IMF. The finale has too much of a commercial character, although this can't necessarily be said about the actual ending. "Haemoo" stands out with its wonderfully bleak, nightmarish and thrilling atmosphere, yet misses out showing some more sensitiveness concerning the characters wich would have been necessary in order to give this thriller more depth and weigth.