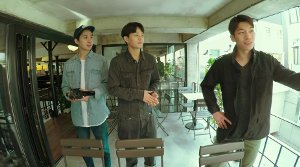 Story: Wi Ha-joon has a YouTube channel and reveals the truth behind haunted houses. In Korea, there exists one of the scariest places in the world: the asylum Gonjiam. Just recently, some teenagers disappeared there. Legend has it that whoever tries to open room number 402 is cursed and dies shortly afterwards. Ha-joon assembles a team, which goes into the asylum at night. They document everything they see via a live internet broadcast. Each teenager is equipped with a camera. Soon they witness some strange incidences in the building. They constantly hear a ping-pong ball and doors are closing by themselves but all this is just staged by Ha-joon, and his two friends Seong-hoon and Seung-wook, who are in on the secret, because they want to draw in more viewers. The girls in their group do not know about it, as the guys want their reactions to be as authentic as possible for the audience. However, there are inexplicable things happening now for real and the team just wants to leave the building. Ha-joon, who pulls the strings from outside of the asylum, wants to crack the one million viewer mark, though, and tries to convince his team to keep documenting the supernatural phenomena. Even if they wanted to, the teenagers would now not be able to escape anymore because the ghosts of patients who committed mass suicide back then won't let them leave anymore... 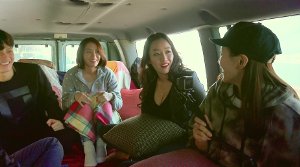 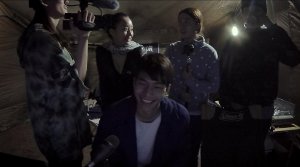 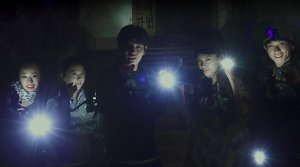 Review: CNN's statement quoted in the movie that the asylum Gonjiam is one of the seven most spookiest places in the world is actually no fiction and therefore, it is just reasonable to take this place as a backdrop for a horror movie. But as this is a "found footage" movie, which generally tries to come off as an authentic documentary, I was originally a little bit reluctant to watch it. The reason being that we are actually supposed to believe that we are watching a documentary. But since "Blair Witch Project", it should be obvious that movies of that genre are as much fiction as any other horror movie. Therefore, you might get the impression that filmmakers try to take you for a fool when they use a genre to sell something as real, which clearly isn't. The result is quite the opposite: Such movies don't really captivate, whereas other movies, which just accept their fictitious nature, make it much easier for us to follow their premise. Nevertheless, "Gonjiam" somehow manages to create a dense and thrilling atmosphere. 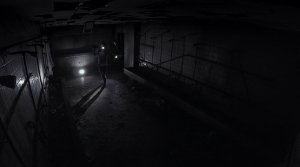 But now I get why, generally speaking, "Gonjiam" is still convincing as a movie. Responsible for the movie is director Jeong Beom-sik, who already created an extraordinary and quite different horror movie with "Epitaph". He has his way with image composition and the right kind of sets, which he proves once more in this movie. The asylum is kept in dark colors and everything seems run-down and moldy. Old wheelchairs roll across halls, spooky pictures from the past are found, there is a burnt imprint of a person on the wall in the communal showers and strange "healing equipment" makes your blood run cold. Surely, you might think that all this is nothing new, but it is simply put on screen brilliantly. The atmosphere is dense and reminiscent of the original "Silent Hill" games. And due to its imagery, "Gonjiam" is indeed innovative within its genre. You have never seen a movie like this from Korea. 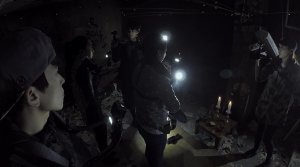 The premise might be hackneyed but the setup gets a new paint job as the protagonists want to be YouTube stars, who chase after viewers during a live show and who are driven by greed, money and fame. Maybe there is some kind of criticism hidden in there somewhere but you shouldn't start to over-intellectualize the movie. The basic concept has one advantage: All the actors make their debut in this movie - using their real names to keep up the authenticity - and do a surprisingly good job. Even when their acting sometimes seems a little bit over the top, this might actually be on purpose. After all, due to the cameras strapped on them, they always have an audience to entertain. But as expected, the horror scenes are created by parts of the crew until inevitably there are real incidences, which slowly drive the YouTube stars insane. The combination of new social media and the "found footage" approach works quite nicely in this case. 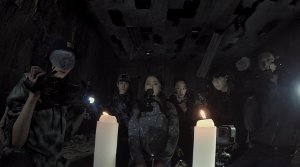 In the beginning of the movie, the getting-to-know-each-other comes across quite authentically. There is some fooling around and even a romance starts up. But all that is of course irrelevant and when we finally arrive at the asylum it does take some time until something actually happens. Nevertheless, the movie still manages to stay thrilling all the time. Director Jeong spooks his audience the most whenever he keeps things in suspense and makes the dense atmosphere work for him. Not every director can pull this off. But of course, we still have to get something to see at some point. Here, the movie gets a little bit tedious in the end and the peek-a-boo game with ghosts instead of babies is somewhat repetitive, as well. This doesn't mean that the movie is not creepy or gripping anymore but the heart-stopping moments before were more effective because the actors channeled the horror themselves, and as mentioned before, they did quite a good job at that. 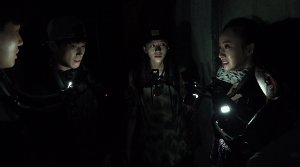 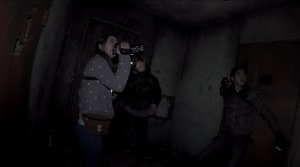 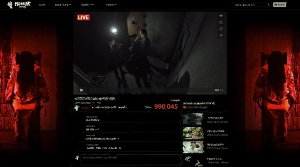 Whoever believes that they might get some sort of answer to the original background of the asylum will be disappointed, though. Plot-wise the movie stays rather superficial. It is the imagery and the atmosphere that captivates us and due to some well-designed sets - the movie wasn't shot in the real asylum but rather at a school, which was remodeled after it - we forget that the actors are actually running around with their own cameras. Thanks to modern technology, we do not get a headache from shaky footage anymore either. Just some occasional problems with the internet connection makes you realize what sort of stylistic device is used here. Kudos for that, too. To use a stylistic device of a "found footage" movie without it seeming to stare us directly into the face all the time, demonstrates the director's skills. Despite my original skepticism at the beginning, "Gonjiam" is one of the most well-achieved horror movies in the genre.