Story: Ha-na (Yooyoung) works part-time at a convenience store and shows her successor Gi-cheol (Gong Myeong) the ropes. As always she is a bit late and starts to have feelings for her lesbian co-worker Eun-yeong (Jeong Hye-in). Gi-cheol is gay, too, and soon needs to do his military service which is why he doesn't want to deepen the relationship to his boyfriend. Another shift is taken over by Hyeon-soo (Sin Jae-ha), who wants to go to a casting, but simply can't leave the store as he is constantly bothered by customers. Shop assistant Soo-hee (Kim Hee-yeon) has similar problems, having to deal with a customer ranting and raving against her. Min-hee (Kim Sae-byeok) even gets trouble with her boss, because she doesn't put up with everything from a customer, and Seong-joon (Ahn Jae-min) has to watch over a box given to him by a strange woman. All of these individuals are solely connected by the convenience store they work at and their boss Jeon Doo-hwan (Kim Su-hyeon), who is in serious financial trouble and therefore tries to keep his store running through speculative stocktrading.

Review: "Futureless Things" pulls off the balancing act between being an odd art house flick and a refreshing comedy which simply wants to entertain. Apart from the episode-like narrative, which constantly shifts from one protagonist to the next, it's also the humor that amazes, most of the time being pretty black in nature and at other times simply being fantastically dumb. You will be in for a fun ride almost all the way through and this even though the movie takes place solely within (and every now and then just outside) a convenience story. What makes this comedy so extraordinary, though, aren't just the interesting characters and the situations that are created through their interactions, but most of all the scathing socio-criticism simmering beneath the surface. In order to actually savor this you have to be a bit familiar with Korean society, though. Otherwise it would be very hard to get all the references. 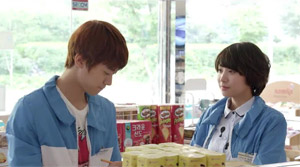 It is impossible to point out all the times references are made to particularly Korean prejudices or social evils since there are too many of those references. For instance, there is the lottery player, who doesn't just turn to God for help in order to pocket the jackpot, but also recites a Buddhist mantra. It doesn't matter what you choose, if it might help you make use of it! At the same time him reinvesting his winnings in new lottery tickets is a reference to the frequent gambling in Korean society, which eventually takes a bad turn for the shop owner and his stocktrading. Apart from that there are also numerous prejudices dealt with and dismantled in a funny way. Such as the women from the Middle East who gets a nose job in order to look like a Korean woman or the craze for being proficient in English and accordingly making your child speak English only. 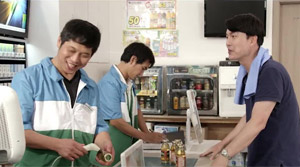 When searching for the story's core you have to take another look at the movie's title. We can read "things", but in fact it's really the individuals that are without a future. So why things? Because the protagonists are taken advantage of by others? Because they have to put up with being treated like things by customers? This seems to be the right track and especially the latter aspect is carried in a very humorous way. Because at the film's surface there are a lot of absurd situations between customers and shop assistants to be seen. And every one of us has already seen one of those difficult customers we are introduced to here in real life. Seeing how some people behave will make you lose faith in humanity as a whole. But things actually revolve around the shop assistants who are doing their part-time job with a better, but completely uncertain future in mind, making them seem somewhat lost.

Ultimately, you just have to pity the shop assistants. The different individuals don't really get the time to fully unfold on screen and yet every one of them leaves an impression. This is a pretty impressive feat by everyone involved. The fresh new faces of the actors, who at best have already appeared in drama shows, are a wise choice by the director, too. The fresh breeze the actors bring to the movie is also carried by a smart screenplay, though. Because after all the different stories aren't really connected and yet everything seems consistent, also because a few episodes are in fact refering to each other. The narrative is also very interesting. We don't get to see the different episodes in a chronological order, as we get aware of towards the end, but a clock always shows us where and when we are in the shop within the twelve-hour timeframe depicted. 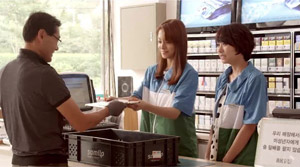 Since the shop remains the only location of the film and because the actions of the individuals are oftentimes a bit odd or even absurd (but never unrealistic!), the film also has something otherworldly to it. There is only one story that clearly shoots way past that into the realm of the fantastic, but it's safe to assume that the young shop assistant involved probably smoked something and thus we shouldn't take everything serious he believes to see. The very bright and somehow good mood inducing pictures are backed up by a surprisingly effectively used soundtrack. The ending even has a shocking turn of events in store for us, which proves that "Futureless Things" isn't just a comedy with outstanding (black) humor, but somewhat of a drama as well, which becomes particularly well reflected in the countless, extremely subtly pinpointed and depicted problems of Korean society. Accordingly, "Futureless Things" is a movie that really impresses and will stick with you for a while. An insiders' tip!