Story: Lui Ming-Chit (Andy Lau) is a righteous detective, who has to witness an innocent hostage getting shot in cold blood during an amored car robbery. He can't do a thing to prevent it as he is jammed in his car because of ex-con Tao Shing-Bong (Gordon Lam). The robbers are able to escape and Tao, a former friend of Lui, asserts that he has nothing to do with the robbery and that the indicident was simply a car accident. Tao has just been released from prison and wants to start a new life with his girlfriend Bing (Yao Chen), which is why he now works as a cook. But Lui doesn't believe him and is sure that he works for the head behind the robbery, Cao (Hu Jun). However, Lui has no evidence against Cao and the gangsters are constantly one step ahead of him. During several shootouts with the robbers Lui also runs into a masked Tao, but he denies his actions even in front of his girlfriend. The only chance to get Cao seems for Lui to let a good friend of his with a criminal record, Tong (Keung Ho-Man), infiltrate the robbers as a mole. Yet, this soon turns out to be a deadly game...

Review: If you are looking for an epic Hong Kong action fest, "Firestorm" is what you want. You don't get anything more nor less than that. Which means that the filmmakers actually bothered writing a somewhat neat story, and in fact there is everything in it that constitutes a good thriller from the former British crown colony, from the car chasing scenes to the mole, but apart from that the movie fails when it comes to character development. For most part this is the fault of an overambitious screenplay, but the actors could have put some more effort into it, too. However, Andy Lau has a particularly tough job, as he has almost no space to develop his complex character in an adequate manner. But all of this is soon forgotten next to all the jaw dropping "Firestorm" inevitably causes. 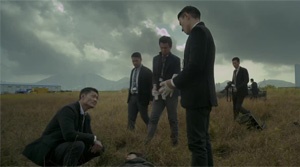 Have we seen explosions in such an exponentially exaggerated form and shootouts that seem to be taken right out of a war zone from Hong Kong like that before? No. For this alone the movie deserves to be recommended. The kinetic energy that the film radiates is breathtaking and the action is so insanely crazy at times that you can just shake your head in disbelief. But not in a bad way and it doesn't even cause the kind of guilty pleasure where you know that you shouldn't have liked that particular flick. Yes, Andy Lau is thrown around by explosions, gets shot, falls from high-rise buildings and after coughing for a moment just continues his mission. Is that a bad thing? Not in a movie like this one, which is simply in need of such a hero. 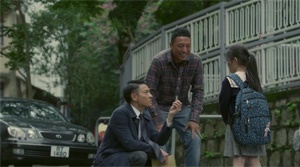 Which brings us right to the next point. Lui is such an upright detective that he would even get his own mother behind bars if need should arise. But certain strokes of fate give his character drawing some strongly dark shades. Andy Lau already pulled off a similar role in "Infernal Affairs" excellently, but here he seems to have some difficulties. His subtle acting may convey his inner struggle and the viewer certainly doesn't know how to judge Lui's actions, since certain aspects of it are clearly wrong, others, however, manage to gain our sympathy. But the biggest problem is the change itself that he undergoes as it isn't founded in the story well enough. The same problem arises with the gangster Tou, who undergoes a similar change, just in the opposite direction.

While Lui isn't fleshed out as an individual at all and at times even seems very wooden, Tou did get a background story that appears to be elaborate enough. Yet, he still lacks a truely believable motivation for his actions. Also, Gordon Lam ("Sparrow") sometimes gives the impression as if not being suited for the role. The script wants to tackle the characters almost from a depth psychology angle, but on the one hand this doesn't fit to the overall tone of the movie, because "Firestorm" just isn't a drama, and on the other hand the approach is rather half-hearted. At least there are some pretty nice twists and the movie is all in all very nihilistic. Which is what makes it easy to forgive that the police are acting like mere canon fodder during the shootouts. Yes, there are whole truckloads of dead people and even innocent people and children are caught in the gunfire. Did I already use the word nihilistic? This simply comes with the territory of a good Hong Kong flick and it's a good thing that "Firestorm" is remembering these "old virtues". 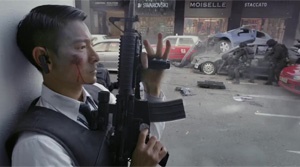 Be warned not to get disappointed too much by the ending, though, since it is Mainland-Chinese-compliant. Most of you will know what that means, everyone else might as well see for themselves. Still, the epic showdown is beyond reproach. Not just the shootouts and the explosions, but also the choreography and the directing are exciting. All in all director Alan Yuen surely delivers fantastic pictures. Yet, despite the breathtaking action and the high-octane pacing "Firestorm" somehow lacks substance. You will probably remember the considerably less spectacular, but more intense finale from Johnnie To's "Drug War" longer than the one staged here. Consequently, "Firestorm" is a Hollywood blockbuster from Hong Kong that has an extra portion of nihilism in store. A movie that falters on an emotional level, but delivers great entertainment.