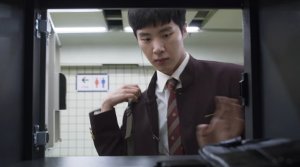 Story: Oh Ji-soo (Kim Dong-hee) is a normal student who has exceptionally good grades and wants to study at a good university. However, his father is a gambler and has left him as did his mother. As a result, he is now completely on his own and needs a lot of money for his school fees and the tuition costs later at university. That's why he has developed an app that allows him to put young women, mostly high school students, in contact with suitors. The stoic Wang-cheol (Choi Min-soo) is responsible for the girls' safety. He actually has to step in once again when Seo Min-hee (Jung Da-bin) comes across a madman. Luckily, all the girls wear a bracelet that allows them to call for help quickly, but still, Min-hee hasn't been able to do her job properly since the incident. In the meantime, Ji-soo keeps things firmly in his hand in the background while he makes sure that no one finds out about his identity. Even Min-hee, who is in the same class as him, has no idea what he is doing. However, there is also his classmate Bae Gyoo-ri (Park Ju-hyun), who is the daughter of a wealthy family and who actually can't stand her parents. She slowly finds out about the boy's secret when his class teacher persuades him to join the same school club as she, and so she wants to become a partner in this business as well. This messes up Ji-soo's cleverly thought out system, but she is not the only one: his father, who suddenly reappears briefly because he needs money, as well as an investigator and a gangster organization, who Ji-soo unknowingly gets on the wrong side of, also interfere with his plans. 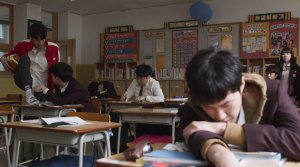 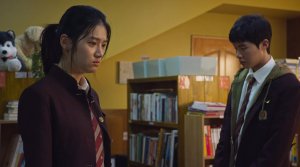 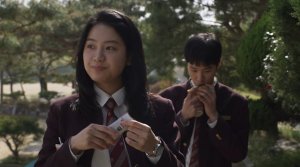 Review: Stressed-out teenagers, pressure to get higher grades at school, bullying - topics that you constantly get to see in Korean movies such as "Thread of Lies". While a lot of Korean drama series may also pick up on these topics, there's more to the Netflix original "Extracurricular". Starting with the fact that the tone of the series is a lot darker and more serious than we are used to from Korean shows set at school. In addition, the story also revolves around a boy who, no matter how much you want to sugarcoat it, is actually a pimp. And he even provides clients with underaged girls, something that is a big problem in Korea, as some schoolgirls want to be able to afford a certain lifestyle. The show uses shades of grey, instead of clear-cut arrangements of good and evil, which is the biggest strength of the ten-episode series. 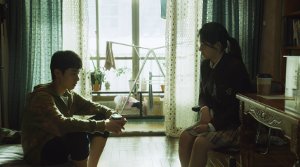 After the first episode, you probably think you are dealing with something like "13 Reasons Why", but that's not the case. "Extracurricular" is also a crime/thriller series with gangsters, a few bloody fights, and exciting twists. It shouldn't come as a surprise that things inevitably are bound to get out of hand and that the events get some "Breaking Bad" vibes. But first of all, the series is about girls selling their bodies and about Ji-soo who acts as facilitator and security service. Difficult moral questions are raised here as well. Do the students actually have the right to decide about what they do with their own bodies simply because they think they are old enough to sell themselves? As a teacher, what would you do when stories like these come out, especially with regard to rumors and bullying that could completely destroy someone psychologically? Where does the pressure of society come from (keywords: latest consumer goods), which forces people into this line of work at this young age? And is Ji-soo to blame for the whole thing? 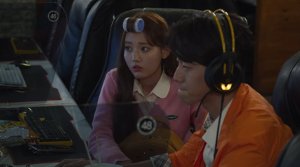 Ji-soo is quite intelligent, but he comes from a family that never could or never wanted to give him what he needed to receive a good education. So, the student takes care of it himself. Therefore, it is not greed that drives him, but the desire to be able to live a normal life. That makes him so ambivalent as a character, and you can actually root for him, even though he seems pretty flat at first. However, the problem is that he bottles up all his emotions and stress, and you never know if, when or how such a person explodes. Then there is the girl Gyoo-ri, who has rich parents but wants to break out of the gilded cage they built for her. She fanatically wants to become a part of Ji-soo's "business". For her, everything is just a game. Spying on other people and blackmailing them, all this is part of her daily routine. There are moments in the show when you just can't stand her, but she is also a far more complex character than you would think. At some point, she even feels sorry for Ji-soo and something like a friendship, that could possibly grow into more, develops between the two business partners. 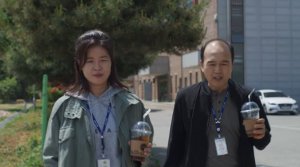 Fortunately, the only potential love story in this series is just hinted at. An equally interesting father- or rather grandfather-like relationship develops between Min-hee and her protector Wang-cheol. He is a man of few words and often steals everybody else the show. Especially in the action scenes he fights for ten people and often seems like an unstoppable force of nature. Even though he also has to take hits very often, he simply continues to unwaveringly beat his opponents. "Extracurricular" can sometimes get astonishingly bloody, especially during the last episodes. An investigator is also introduced quite soon, but for a long time she gets pushed into the background. As the episodes progress, however, the thriller aspect becomes stronger, and with a gangster organization getting into the mix, things become more and more dangerous for the two teenagers, until they suddenly find themselves in a completely different league. Here, "Extracurricular" becomes extremely gripping, because now, decisions have to be made that may determine life or death. 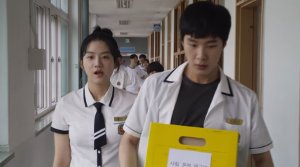 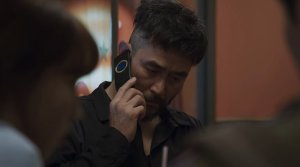 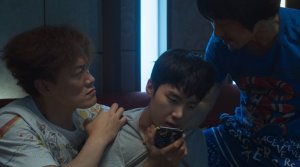 With the teacher, there is another interesting character who could provide a way out for Ji-soo, concerning his increasingly derailing life. The number of characters as well as a small but constant change of focus benefit the series and keep the events fresh. Nevertheless, Ji-soo and Gyoo-ri remain the center of the show, which is both important and the right thing to do, because everything bad that happens originates from them. Ji-soo finally reaches his breaking point, which is manifested in some twisted nightmares, and Gyoo-ri never knows when she has to admit defeat. This creates a nice dynamic. What could be criticized, though, is the fact that the series focuses surprisingly strong on its crime elements during the last episodes, and this doesn't quite harmonize with the first episodes. Even though there is still some drama at that point - or maybe even more so - the series does not turn into a cheesy romantic show; instead, the actors convey dramatic elements quite convincingly and the production looks nothing like cheap TV material. With its themes and well-written characters, "Extracurricular" is a slightly different, but exciting series that can also be recommended to those who otherwise have no interest in Korean shows.