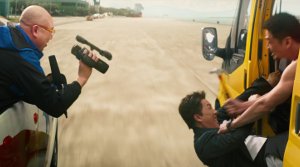 Story: Fallon Zhu (Donnie Yen) is a police officer in Hong Kong and is actually supposed to wait for his wife Chloe (Niki Chow) for a wedding photo shoot. However, suddenly a robbery takes place and Zhu has to help out his colleague Shing (Louis Cheung). Then, the policeman accidentally drives a car with some of the criminals in it directly into the police headquarters. Zhu has to bear the consequences and is transferred to the evidence room for disciplinary reasons. His wife, a TV actress, is also fed up with Zhu because he constantly has to play the hero. She splits up with him. The policeman has hit rock bottom and even gives up on his body. He gains some weight until finally Shing, who is his superior now, gets in contact with him and offers him a chance to get his old job back. For that, he has to transfer a criminal to Tokyo. However, it doesn't take long for a lot of things go wrong in the process. The criminal manages to escape because of a corrupt policeman. Apparently, he has evidence which could be used against the yakuza. Zhu's contact in Tokyo is Thor (Wong Jing). Thor's wife Charisma (Teresa Mo) is in a lot of debt with the yakuza and once more Zhu finds himself stuck in the middle of a fight with gangsters. To make things even worse, his ex-wife is also in Tokyo, because the head of the yakuza is a big fan of hers. Nevertheless, the ruthless grandson of the Yakuza boss, Shimakura (Joey Ivanaga), is the real threat here... 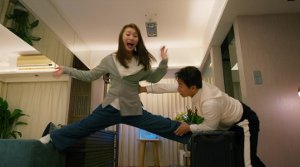 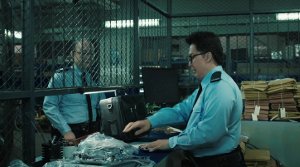 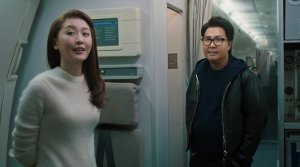 Review: "Enter the Fat Dragon" is one of the annual Lunar New Year movies from Hong Kong. This normally means that we get silly entertainment and the name Wong Jing. In fact, the two elements belong together like Bruce Lee and nunchucks. However, this comedy - whose only link to the 1978 Sammo Hung comedy "Enter the Fat Dragon" is its name and a fat Bruce Lee fan - is actually pretty entertaining. There are two main reasons for this: Donnie Yen tries to reinvent himself by living out his comedic side and it actually works. He is obviously having a lot of fun and he brings a fresh charisma to the movie which you wouldn't have expected from him. And then there are the fights and the stunts. You feel like you're back in the 80s and 90s of Hong Kong cinema, where you couldn't help but scream out loud because you were certain that person x had just broken his neck during the stunt. Yes, it's a little bit of Jackie Chan. 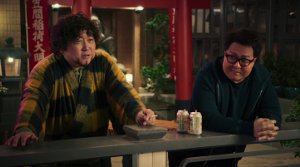 The intro shows us scenes we get to see later on in the movie and somehow this is not a big promise for quality. Donnie Yen does not wear his body suit yet and he fights criminals with spectacular martial arts moves. That's a plus. When he is almost pushed out of the side door during a fight in a van and then intrusive reporters drive next to him shoving their camera directly into his face, the movie gets much funnier than you would have expected. The highlight is when Donnie Yen's fight in the alley from "SPL" or the showdown from "Flash Point" are recreated very successfully and sold to us as Fallon Zhu's flashbacks. This is good comedy that actually rewards those who are familiar with Yen's filmography. But apart from that, of course, there are also other funny moments that are actually not the lowest kind of slapstick you usually get with such movies. 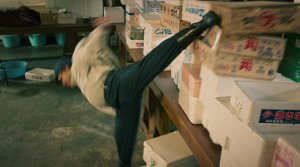 With Tokyo as its setting, the movie probably also tries to appeal to an international audience. The entertainment district, which was specially built for the movie, including its many neon signs, rooftop terraces and small shops, is an excellent playground for the parkour elements, in which Donnie Yen - with his one too many pounds - makes his way from one rooftop to the next, jumping around, falling through roofs and so on and so forth. In addition to the fights, this creates some innovative chase scenes and, as I mentioned before, it reminds us of Jackie Chan in his best years. Which can be pretty irritating, because with his 56 years of age, Donnie Yen shouldn't be allowed to run and jump around like that. It really looks like he is rejuvenated. But if you don't accept this as a point of criticism, then you at least have to ask yourself why Fallon Zhu can still perform acrobatic maneuvers despite his overweight and never gets out of breath. With Sammo Hung, the overall picture simply fit better, because he was acrobatic, but you could still recognize his body mass within the movements. Sadly, this is not the case in this movie and that destroys the illusion a little bit. 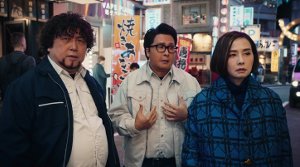 The fights are just great. There is a special mix of different action in this movie that simply works. Yen is allowed to grapple on the ground, but also shows more acrobatic movements, and above all else all his punches and kicks have a lot of power. At least here, the director made sure to underline the larger body mass of the policeman. In addition, the stuntmen deserve a lot of praise because they let themselves be kicked around in a spectacular way. Here you can see quite clearly that director Kenji Tanigaki has his roots as an action and stunt choreographer in movies such as the aforementioned "SPL" or "Rurouni Kenshin". The finale also has a decent length and of course, gives Donnie Yen some nunchucks to play around with. But all this almost sounds like it's an action flick, right? No, the humor goes hand in hand with the action and creates a high pacing. 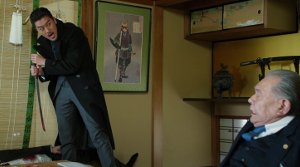 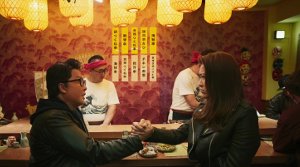 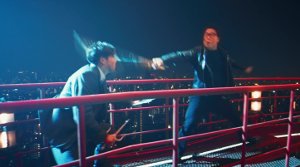 The characters are also important for the humor. Not only Zhu and his ex-wife are constantly arguing, but also the policeman's contact person, who is played by Wong Jing himself (director and producer of such silly movies like "Love is a many Stupid Thing") in a surprisingly likeable fashion, and his wife. This brings a good dynamic to the movie and makes everything a little bit more colorful. The supporting characters are generally very charming, even if they sometimes turn out a little bit too goofy. But that's probably just part of a movie like this. In the end, naturally, you can forget about the story, but "Enter the Fat Dragon" brings back the silliness of old Hong Kong flicks and also adds some hard-hitting action scenes from those days, while somehow still finding its own tone. This is more than we would have hoped for and it is an interesting new beginning for Donnie Yen, who has just completed his "Ip Man" series. Bottom line: This movie actually works pretty well as an action comedy.