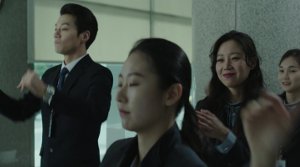 Story: Jo Kyeong-min (Gong Hyo-jin) works as a bank clerk and could actually be happy because she will soon get to sign her contract of employment of indefinite duration. But something is not right in her life. She regularly wakes up with dizziness and somebody constantly fiddles around with her door lock, which can be opened via a numeric keypad. In addition, she also finds a cigarette butt in front of her door. Eventually, somebody rattles at her door at night and enters a wrong code several times. Kyeong-min thinks that the culprit could be a client from the bank who was angry because she didn't want to get a coffee with him. The police can't do anything about this case and therefore the woman turns to her friend Hyo-joo (Kim Ye-won) for help. When a colleague of hers then gets murdered in Kyeong-min's apartment and the police even suspects the bank clerk herself, the two friends start to follow the clues they collected so far on their own. There are not many leads, but she finds a code card in her apartment, which probably belongs to a door in her multistory building. Eventually, she finds the corresponding apartment and soon she gets closer to the murderer than she actually intended to. In the meantime, the murderer gets more and more crazy about her... 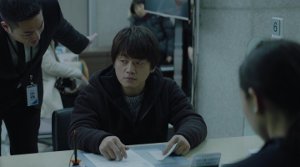 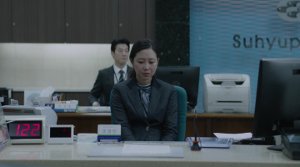 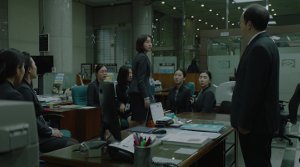 Review: Your home should actually be a sanctuary in which you can feel safe. So, what would be more fitting for a horror thriller than to have a stranger break into your four walls. The first scene shows us a man who hugs the protagonist in bed, then he gets ready to go to work while his girlfriend still sleeps. After that, we get to know that this is not a couple's typical morning routine, but instead the man is actually a crazy person, who sedates Kyeong-min every night in her sleep in order to spent time with her. What follows is a pretty interesting psycho thriller, which focuses on Kyeong-min's paranoid character during its first half while we realize little by little that she has every reason to be paranoid. As a movie "Door Lock" is pretty gripping and is different from a typical horror movie. At least, until the second half of the movie because then, everything gets rather predictable. 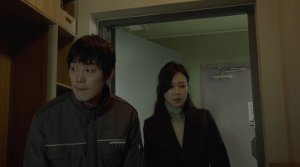 In fact, this movie is a remake or rather a reinterpretation of the Spanish horror thriller "Sleep Tight" by Jaume Balagueró. The eponymous door lock, however, is something that was added for the Korean script. To make a lock's safety dependent on just four numbers which can open the door to an apartment is really scary. Director Lee Kwon integrates not only motives like paranoia and claustrophobia, but also shows voyeurism by using some CCTV shots. Later on, there are scenes, which could be right out of a slasher movie, even though "Door Lock" never gets all too bloody. The mad killer gets more active and Kyeong-min's life is really in danger. Nevertheless, the protagonist is not inactive at all and actually tries to find out who the man is that is after her. This is praiseworthy as it lets the heroine break out of her role as the damsel in distress. 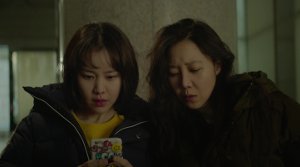 At the same time, that brings us to the biggest problem of "Door Lock". While the heroine comes across rather intelligent at the beginning, even though she also seems paranoid - a trait which actually never really gets explained -, she makes some pretty dumb decisions in the second half of the movie and also lets herself get paralyzed with fear. Admittedly, she reflects on that and some of her not so smart decisions are questioned, but that doesn't change the fact that the movie gets more and more lost in horror thriller clichés. Towards the end, Kyeong-min even gets completely helpless - even though we are aware of the fact that our heroine will most likely not bite the dust -, and we can't imagine that she will be able to save her life by her own efforts. Either she will get saved by somebody else or some fortunate coincidence comes along. That's pretty unoriginal. 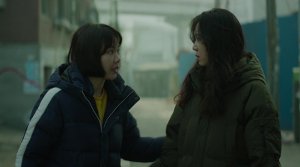 Gong Hyo-jin ("Hit-and-Run Squad") plays the woman who becomes a detective and tries to solve the mystery of her pursuer. Her character is not completely uninteresting, but as soon as we realize that we have already come to know everything there is to know about her, she gets less intriguing. That's a pity because after all, we don't learn all that much about her. At her job she lets herself be outpaced by others and doesn't show any sign of being a fighter. Eventually, she wants to change that and at least at her job she tries to do so. When it comes to her stalker, however, she seems to get more and more defensive and navigates herself into the role of the victim. Of course, horror works better if the victim can't defend herself. The feeling of helplessness and the resulting panic is simply bigger. But the genre tropes just get out of control at some point, and especially towards the end "Door Lock" definitely drops in terms of quality. 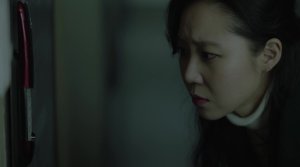 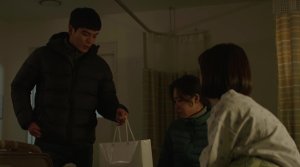 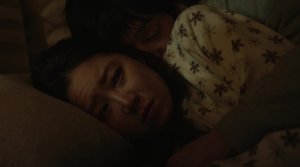 The stalker's identity is actually quite easy to find out. Nevertheless, the movie takes its time to do so. And when the scriptwriter tries to pass somebody else off as the culprit, it's abundantly clear to us that he just wants to set the audience on the wrong track. While the police aren't much use at the beginning, at least, they are not completely clueless and manage to contribute their share at the end. However, the script struggles with some inconsistencies and the finale is pretty dull. And where you normally have to criticize the stereotypical depiction of women in movies, now, it's problematic that almost all men are portrayed as stalkers or perverts, only to create more tension and turn everybody into a potential culprit. Nevertheless, there's nothing to criticize about the directing, we get a dense and gloomy atmosphere. Especially the ever-growing level of suspense would have meant nothing but praise for "Door Lock", but the unoriginal second half of the movie unfortunately prevents me from giving it.