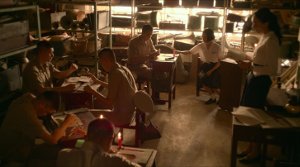 Story: In the year 1962 Taiwan has to deal with the "White Terror". Left-wing books are forbidden and individuals with questionable philosophies are taken action against. For Fang Ray-shin (Gingle Wang) it is daily routine that the loudspeaker announcements at her school order the students to report politically suspicious people immediately. But her everyday life is soon turned upside down. One night, she finds herself in the school and her classmate Wei Chung-ting (Tseng Ching-hua) is the only other person there. She doesn't know the boy all that well, but he has been interested in the girl for a long time. However, Ray-shin knows that Chung-ting is a member of a group, which secretly reads forbidden books at school. The group's leader is her teacher Mr. Chang (Fu Meng-po), for whom the girl has feelings. There was a huge commotion at school because a student, who was a member of this group, was taken away. Now, all the group's members are afraid to be caught because the government is well-known for their torturing procedures and their way to extract information. Being strangely trapped in the school, Ray-shin and Chung-ting now search for their teacher as they are afraid he might have been taken away by the government as well. But instead of finding him, the girl witnesses inexplicable scenes at school and then there is also a monster which hunts her and her classmate... 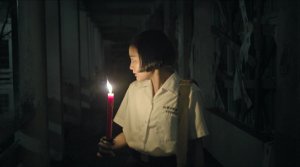 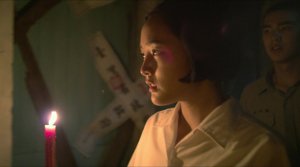 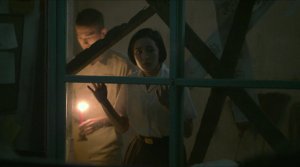 Review: "Detention" deals with a period of time in Taiwanese history which most likely a lot of people outside the country are not aware of. The "White Terror" describes a time, in which government opponents, or those who were accused to be such, were arrested, tortured and/or executed. This was legalized through martial law, which was in effect from 1949 till 1987 in Taiwan. Any form of opposition, including reading forbidden books with left-wing content that stand against the ruling Kuomintang (KMT) party under Chiang Kai-shek, was severely punished. To put this terror on screen in form of a psychological horror movie seems a rather promising endeavor. In fact, "Detention" turns out to be an innovative horror film, which is ahead of most of its competition in the genre, especially because of the well-written story. 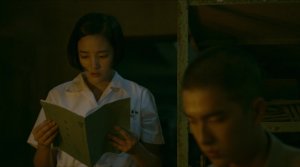 It may come as a surprise to some that "Detention" is actually based on a Taiwanese video game, which was highly praised by critics because of its themes and subtle horror. The movie's roots can only be seen in the stylized atmosphere which tries to capture the video game's vibe. And it mostly works pretty well. A school as the setting of a horror movie is nothing new, just think about "Memento Mori" or "Death Bell", but the fragile psyche of teenagers and their vulnerability is, of course, a perfect breeding ground for horror. Especially if it is embodied by an ideology, which is planted in childrens' brains by an authoritarian state. However, it is equally easy for revolutionaries to make the kids rebel. That's why we feel sorry for the teenagers in "Detention", they are just little chess pieces in a game they don't actually play themselves. 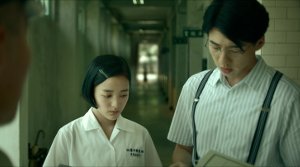 "Detention" is told in three chapters and at the beginning things don't actually make all that much sense. Therefore, you might worry that you are just dealing with a horror movie, which only wants to impress with its atmosphere and is otherwise just a narrative disaster. But instead, this is in fact where the movie's biggest strength lies. We don't know the characters and are just thrown into the movie. Moreover, the first chapter is called "nightmare", so we immediately know that we are not dealing with reality right now and we also get enough clues for that. Visions, students without faces and an incarnation of the KMT in form of a humanoid monster with a lantern and a voice which sounds like a loudspeaker announcement. The movie's strength is that those events and visions, which we get to see here, will be explained at another point of the movie, and even horror scenes, which are apparently only there to give the viewer some jump-scares, later turn out to have a meaning as well. 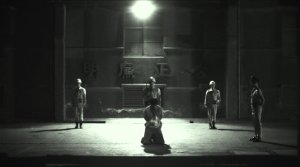 Director John Hsu doesn't tell his story chronologically. Especially in the second chapter, we jump more and more frequently from the nightmare-world to reality, and thus into the past. We get to know the students and teachers and their relationships with one another a little bit more, and much to our surprise we find out that important themes of the movie are also love, jealousy and betrayal. Unfortunately, the characters remain rather flat. Ray-shin is fleshed out a little bit more, but the other characters stay pretty one-dimensional which makes us fear that the inevitable shift from horror to drama will not work as we don't care all that much about the individuals. However, this is not the case. The main themes of the movie - oppression by an authoritarian state, persecution, torture and execution - are all portrayed quite neat, also in form of some horror-like images, and therefore the drama is pretty effective, after all. 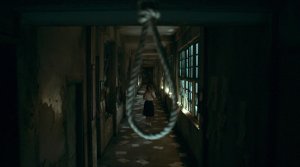 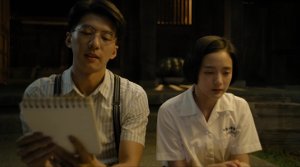 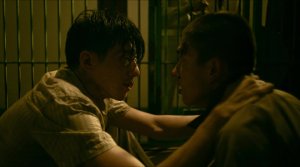 The fact that we get to see executions, that nooses constantly appear as a motive, or that the "monster" strangles its victims while a tow sack is growing over their heads, is pretty disturbing and shows the horrors of this time period. The pictures try to get close to the video game source material and therefore turn out pretty unique. Some images and scenes are also well-done metaphors, even if they are not all that subtle, but the special effects (here I'm mostly talking about the monster) are not always that convincing. "Detention" is a film which starts out as a simple horror movie and then gets more and more political. Towards the end, the movie's message not to forget the past, is handed to us on a silver plate. This could have been done more subtle, but the way "Detention" tells its political story is pretty innovative and should also be able to win over horror fans. The last chapter is more of an epilogue and makes all the pent-up feelings burst out at once, which is also a sign for the good quality of this interesting horror movie about the Taiwanese past.