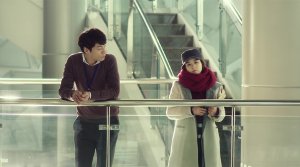 Story: Mutant Park Goo (Lee Kwang-soo) seems to appear out of nowhere. He is half human, half fish. The reason for his metamorphosis is a clinical trial for a new drug, which is supposed to stop world hunger, he participated in. Before Park stood in the spotlight of media he sought shelter at his girlfriend's home, Joo-jin (Park Bo-young), who would describe her relationship with the now mutated man as merely a one-night-stand. She sells him out to the clinic which is already desperately looking for the mutant in order to conduct more tests on him. A news station learns about the fishman and tells potential new employee Sang-won (Lee Chun-hee) to investigate it. He is not supposed to reveal himself as a reporter, but to interview Park. With the help of Joo-jin he breaks into the clinic and the fishman's existence is finally brought to the public eye. Because his human rights were violated and upon the advice of his father (Jang Gwang) Park Goo hires a lawyer (Kim Hee-won). The doctor responsible, Dr. Byeon (Lee Byung-joon), is now subject to public criticism. However, when it turns out that his discovery could mean the nobel prize for South Korea, public opinion suddenly shifts and the mutant now finds himself without any friends... 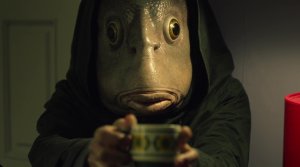 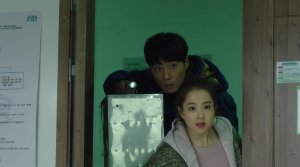 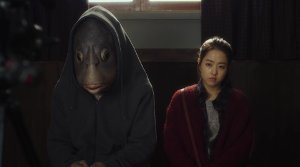 Review: Somewhere under the surface of this odd tragicomedy there has to be buried a small stroke of genius. The movie dishes out criticism on Korean society left and right and it does so in the shape of a... you could almost call it fable. That's extremely fascinating and even though you may criticize that the picture asks many questions and answers only very few you still have to point out that this may actually be enough, if in return the questions are put forward the right way. Unfortunately, it becomes clear at some point throughout that "Collective Invention" works too much on the surface for it to be really fascinating. Apart from that the characters and the story remain quite cold and distanced. Just like the fish face which stares at us expressionless, making reading any emotions in it a guessing game. 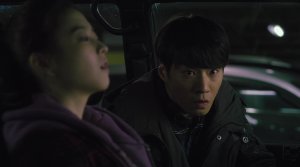 Let's take a look at what director Kwon Oh-kwang criticizes in his debut work. First of all, there is youth having no perspective in life or chance of getting a job, making them dependent on jobs like clinical trials if they don't call a university degree their own. Then there is the media which always twists the truth the way it wants resp. sells it to the highest bidder. The average Korean holds a demonstration against what he/she doesn't like and following that counter-demonstrators come together as well. Then there is also the country's strong wish of playing a major role on world stage in the field of science. No matter the cost: It doesn't need to be ethically justifiable. All of this, and also the way how Park Goo is adored like a star, make flash up obvious parallels to current Korean politics and issues. 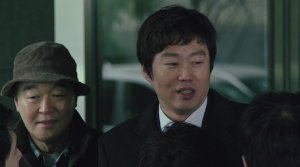 If there is someone more liberal in his thinking he is simply called a communist and eggs are thrown at him while religion does its part in finding peace of mind by letting a priest beat up the fishman as if it were some sort of exorcism. This is all quite interesting and leaves a lot of material for interpretation, which is pretty obvious considering the fishman allegory, but most parts don't gear into each other the way they should and in the end they can't constitute the fantastic socio-critical canvas which we at first suspect to hide under the surface. For this the movie is fanned out too wide and is without a clear-cut course. In fact, "Collective Invention" could have been a socio-critical piece of work which makes you reflect, if the screenplay had been polished some more. The potential is there somewhere. 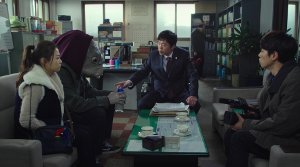 Still, another problem is that the story is presented in a manner that proves to be too cold and reserved. You even might presume that the director himself wasn't quite sure what kind of story he wanted to present. A detective movie in which a reporter, played by Lee Chun-hee ("Humming"), looks for the truth? A socio-critical drama? Or a character-oriented tragicomedy in which we see Park Goo more and more drift away from society? Even though we never see actor Lee Kwang-soo ("Confession") behind the oddly ridiculous looking fish mask we are still aware that this fishman has feelings and thinks about his current state. But what kind of thoughts go through his mind remain a mystery to us. To see him being lost in this world is moving, but there is more and character elaboration just isn't done sufficiently enough for us to see it. Park Bo-young ("A Werewolf Boy") seems to be playing a promising character as well, but her development also falls far short of what could have been. 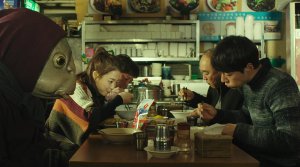 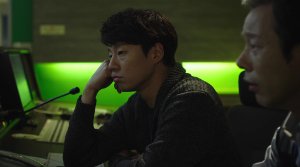 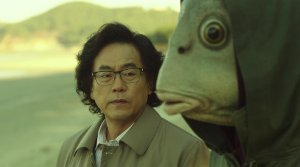 Furthermore, "Collective Invention" wants to be a comedy. But sometimes this seems rather forced. We may not get any slapstick, but it's the kind of humor which wants to leave no doubt that drama and comedy can in fact be brought together. Also, the gags don't always fit the odd mood. At best there are a few absurd scenes, but sometimes things simply become bizarre. The atmosphere can actually be described as depressing during those moments. The sad, waltz-like soundtrack underlines this as well. Ultimately, the drama remains too vague in what it really wants to denounce. This becomes even clearer with the confusing ending. Is the film aiming at giving us some hope or make us aware of the social evils in Korean society? "Collective Invention" is odd and because of that actually a movie which shouldn't be overlooked. Sadly, the director's objectives are at best very vague.