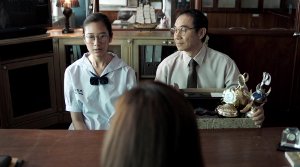 Story: Lynn (Chutimon Chuengcharoensukying) is an excellent student and gets a scholarship to go to a respectable school. At her new school, Grace (Eisaya Hosuwan) soon becomes friends with her. Grace is by no means as smart as Lynn is and even being tutored by her new friend doesn't help her to pass her test. This is why Lynn gives her the answers during the test. Grace's friend Pat (Teeradon Supapunpinyo) hears about it and wants to get the answers from her for the next test, as well. He even wants to pay her for it. After they found more of Pat's friends who are willing to pay Lynn for the answers, the schoolgirl creates a system to get the answers to the students during the test. As she and her single father are very poor, she now sees a chance to finally change something in her life. At the same time, she competes with the also poor student Bank (Chanon Santinatornkul) for a scholarship to possibly study abroad. However, Bank catches her fellow-student giving away the answers for the test and she is disqualified from the scholarship. Grace and Pat already have another idea. They want the answers for the international STIC exam and Lynn could make a lot of money from that. But she would also need Bank's help ... 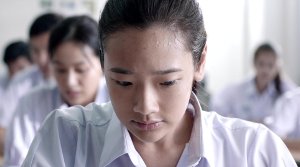 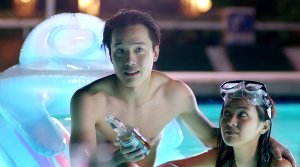 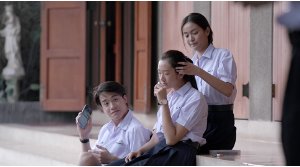 Review: It has been a while since a movie from Thailand was able to catch my attention. Apart from an art house movie here and there or action movies like "Chocolate" as well as various Tony Jaa movies, there is not a lot coming out of this country, which would justify to take Thailand seriously when it comes to cinema. Now that has changed with "Bad Genius". Both the international and the local press are impressed by the movie and you do realize why quite quickly. We are talking about a heist movie, which doesn't revolve around a robbery or something similar but rather focuses on students who cheat at exams. Something rather boring is being told with such a high pacing and has such a witty script that you could think it's a matter of life and death. Simply for that director Nattawut Poonpiriya deserves high praise. In addition, he vaulted Thailand to a new cinematic level with this thriller, which you wouldn't have expected from this country anymore. 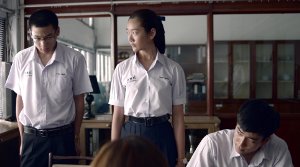 "Bad Genius" is clearly meant for an international audience. The polished and anything but cheap imagery speaks for itself. At the same time, the country's problems are dealt with. The two-class society can also be seen in the educational system's corruption, which is such a common practice that the school's principal doesn't even notice it anymore. Lynn is a girl who could break free from this cycle by means of her intelligence, but she chooses the easy way out and sells the answers to exam questions. This is no felony but it makes it harder to identify with her. In addition, she does not even have a real motivation to take that big of a risk. In fact, it is greed that pushes her into this direction, which corrupts her. This is problematic, because it makes her emotionally unavailable for us. However, it also creates an unusual protagonist. 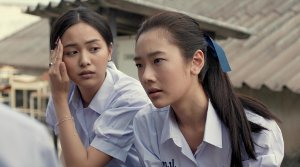 The only pitiful person is Bank, because he wants to fight himself to the top with diligence and effort, doesn't have any friends because of that and lives in the poorest of conditions. Regarding its characters, the movie does have some surprises in store, as they undergo some changes, which are indeed believable. Even secondary characters like Grace and Pat are not at all stereotypical villains trying to take advantage of Lynn. This three-dimensionality of the characters is really convincing, only Lynn stays too unapproachable and mysterious for too long. Some well-done scenes with her father do unfortunately not make up for that. But the script works with its characters and does not just focus on the adrenaline driven scenes, in which the answers for the exam are being passed on, which can be seen especially at the end and make the movie in its entirety so effective. 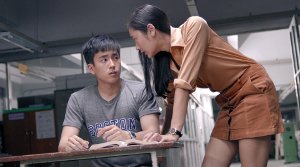 Wheras Korea provides the heist genre with movies like "The Thieves" and China produces movies like "The Adventurers", which are hyped-up action thrillers with a shallow script, "Bad Genius" dials it down a notch, uses a rather mundane and actually unspectacular topic and creates a gripping thriller around it. No doubt, there is far too much going wrong in the finale to still be considered believable, but this is just part of the genre and as soon as you start thinking about the consequences of the students being caught, you might ask yourself why exactly you are so glued to the screen. But the consequences are tangible for the teenagers and they could actually ruin their futures. Sometimes less is more and "Bad Genius" is a good example for that. The script is well written and uses twists as well as numerous suspense-packed moments, which can be rather stressful to watch. 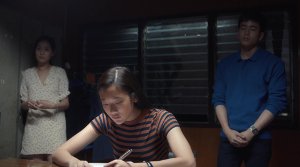 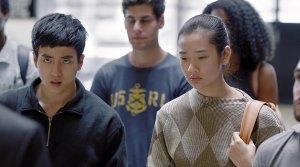 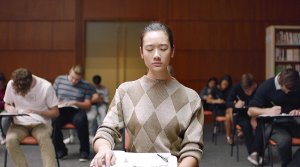 The topics education, corruption, poverty and daily problems of young people are integrated nicely in this thriller, only the ending cuts both ways. In general, you can't say anything bad about the ending. It is effective, at least one of the characters grows but at the same time, the movie's ending is lacking some kind of courage. It seems as if the director didn't really dare to present any other ending. That's a pity, but this is the only serious criticism about the movie - except for the rather long running time of 130 minutes. Due to its international flair and the gripping suspense this heist movie can be highly recommended and puts Thailand back on the cinematic map; it shows that countries like that can offer more than just the occasional movie for film festival niches. A suspense-packed and highly entertaining movie!