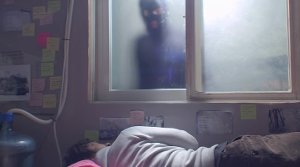 Story: Soo-min (Lee Ju-won) is a photographer. One day, he stands on a roof and takes pictures of the winding alleys of his neighborhood. Then he notices three mummed figures on the opposite roof killing a woman. He manages to take a picture of the murderers, but they see him. He flees into his apartment where the three men find him and beat him senseless with a hammer. When Soo-min regains consciousness, it is night and he lies naked in an alley in his neighborhood. Disoriented, he walks through the alleys and comes across a kid with a knife and a crying woman. Because he is naked, he avoids them and finally reaches his apartment. When he enters it, he finds somebody sitting at his table, and when he examines the person more closely, he sees that the man doesn't have a head anymore. Then, one of the mummed figures appears once more and chokes him until he passes out. And once more, the photographer wakes up in the alleys of his neighborhood, this time, he is wearing clothes, though. It turns out that the crying woman, whose face he couldn't see properly last time, is his girlfriend Ji-yeon (Song Yoo-hyun). She tells him that she wants to break up with him, which comes at the worst of times for Soo-min. His headache is almost killing him and he has no idea what is going on at the moment. But not just the boy with the knife is a mystery, his mother's constant calls also seem to mean more than first meets the eye... 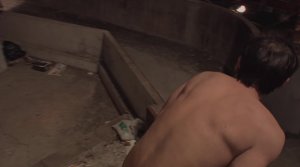 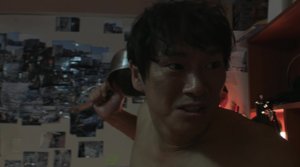 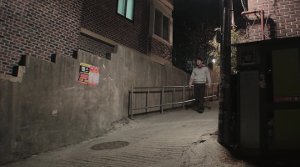 Review: With its introduction, "Alone" easily manages to catch the audience's interest. It achieves this by using a POV shot, in which we see the protagonist trying to wipe off some blood. Apparently, he accidentally murdered somebody. But in the next scene, we are somewhere else again. Is it a flashback? Well, the narrative style is not as linear as you might be used to by most other indie movies. And indeed, you soon get the feeling that you could be watching a version of "Groundhog Day". But that's also not right. Soon, it becomes clear that the world, the story's hero is part of, is more of a nightmare he can't wake up from. Of course, you ask yourself why that is. And in fact, we delve deeper and deeper into Soo-min's psyche and also get to know more about his past. 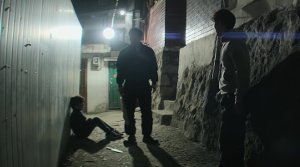 The movie also reminds you a little bit of a horror movie. And that is not because of things like the headless man in Soo-min's apartment or the men with a hammer as a murder weapon. Instead, it is the loneliness in the alley of the neighborhood which creates a feeling of isolation and other-worldliness. Neighborhoods like these exist in great numbers in Korea. Hilly, narrow and endlessly winding streets and alleys which seem like a maze you can never escape from. This labyrinth is also emphasized via some interesting tracking shots. We get to see the camera following Soo-min - in a scene which admittedly turned out far too long - while he walks through the winding alleys. Then the camera spins away, even turns around in a circle, so it seems, and then locates Soo-min somewhere else in the labyrinth. What the labyrinth stands for is also pretty clear, and later on Soo-min even says it himself: It is his brain, his inner self, in which he can't find his bearing's anymore. 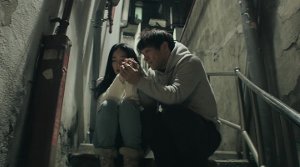 The world seems empty and lonely. There is not a soul to be seen. It could easily be a post-apocalyptical world if it weren't for a few cabs that we get to see driving on the streets sometimes. You can even hear traffic noise from somewhere. However, there seems to be an invisible wall between this world and Soo-min. And then Soo-min also constantly runs into two people in the alleys. His girlfriend and a little boy. The boy holds a knife in his hands, which once more brings something unreal and nightmarish to the movie. However, at this point, we already expect that the things we are shown are visualizations of Soo-min's memories. But, as mentioned before, things are not that clear. Eventually, the movie takes a meta turn and we even see how Soo-min films himself. Are these nightmarish scenes only movie versions of his traumata? Somewhere along the line, we apparently even stroll into the real world where we see Soo-min and his girl-friend chitchatting happily whilst walking through crowded streets. 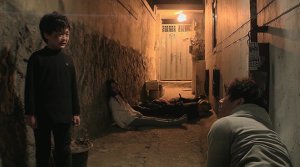 You actually have to go the extra mile to figure out what director Park Hong-min wants to say with his story. However, it is not particularly hard to do either. Also, because something unexpected can easily happen at any moment, "Alone" is more gripping than it actually has any right to be, for the pacing is often pretty slow and sometimes we accompany Soo-min through grayish concrete alleys for what feels like minutes without a word spoken. The camera always follows the protagonist either from a great distance or at close range. At this point, it needs to be praised that even though the movie was shot in handheld camera style, the shots are clean and there is no unnecessary shakiness. This prevents the drama from looking like so many other indie flicks (for instance "Bleak Night" or "End of Animal"). Everything is in focus and it seems as if the movie had a bigger budget than it actually did. 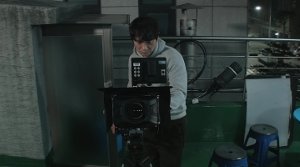 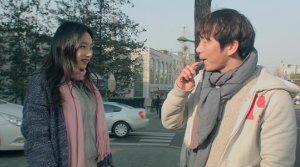 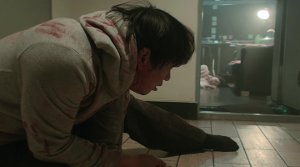 Another pretty impressive thing is the fact that there are extremely few cuts; a lot of scenes were shot in a continuous long shot. Lee Ju-won as the lead also deserves great praise because in those scenes he is allowed to show us a roller-coaster ride of emotions. Sometimes, this reminds us of a stage play, especially when the protagonist talks to himself behind the camera, but the acting is pretty good. What didn't turn out that well, though, are some monologues and dialogues that go around in circles or don't actually offer anything essential. And another weakness that needs to be pointed out once more is the slow pacing. At some points, the 90-minute flick could easily have been cut down a bit. Therefore, "Alone" can only be recommended to patient viewers, who have no issue with a non-linear narrative style and who want to see a drama which is a little bit different and has some good ideas to offer.