Story: In August 1950 the South Korean Army is suffering heavy losses and has to flee further and further into the south. North Korean commander Park Moo-rang (Cha Seung-won) forces Captain Kang (Kim Seung-woo) and his men to retreat to Nakdong river. There, the decisive battle is about to take place in which the American allies will help the South. But Kang doesn't want to give up Pohang since it has great strategic value. As he has no men to spare he stations 71 students, who volunteered to be soldiers, at a school in Pohang. The unit is led by Oh Jang-beom (Choi Seung-hyeon), who has the most combat experience, which is still very little in the end. For this reason and because of his quiet nature his authority is constantly questioned by Kap-jo (Kwon Sang-woo), a former gang member. While the two clash on several occasions war slowly catches up with the unit. After all, Commander Park has only little interest in Nakdong, but more in Pohang...

Review: South Korea hasn't really brought to screen just a small share of war movies and that isn't a surprise considering the country's history. Strangely enough, "71: Into the Fire" did rather unspectacular at the box office and accordingly wasn't on my radar for long. And absolutely wrongly so as the film isn't just an extraordinarily good war movie, but also has something like a story to tell. A story that is based on true events, although it becomes obvious very soon where director John H. Lee took some more liberties in order to keep the drama level high as well. However, the drama never gets in the way of the movie itself, probably also because the characters are elaborated sufficently enough, in fact making us care for them. 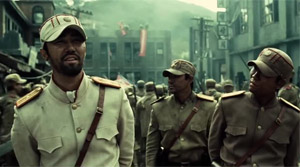 Director John H. Lee has already proven with "A Moment to Remember" that he can create a tearjerker that transcends the borders of its genre. This time Lee doesn't just once again prove to have an extraordinary sense for wonderful picture composition, but also shows us that he can stage action scenes just perfectly. Even in the introduction everything blows up in our face, while the story's hero, who isn't anything like a hero yet, is introduced. The explosions, the destroyed buildings, the bullets piercing through the air: The director truely did get the maximum out of the budget at hand and the movie easily is on a par with similar Hollywood flicks. Deserving some special words of praise is that Lee manages to capture the chaos of war, without every giving us the impression that he loses control of the events unfolding. 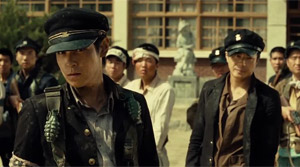 The story is also interesting because of its protagonist Oh Jang-beom, still almost being a child that doesn't even manage to fire a single bullet and then is appointed as the leader of a whole unit. Because of his quiet nature it's difficult for him to gain the respect he needs to have in his position, of course, but while he grows in character as the leader of his men there are thankfully no clichés made use of whatsoever. Choi Seung-hyeon ("Commitment") talks only little in his role, yet manages to create the necessary intensity with his glances alone and sometimes we even get some insight into his inner workings this way, too. A pleasingly subtle performance. Kwon Sang-woo ("Spirit of Jeet Kune Do") plays the antagonist in a way, who forces him to grow and even though his role would have deserved some more depth he also avoids any clichés.

The villain also manages to surprise. Played by Cha Seung-won ("Blades of Blood") Park is a general who pursues his goal very determinedly. Still, he isn't without mercy as some scenes are proof of and he himself is even aware that it is only coincidence that he is born in the north and his enemies in the south. However, most of the time we spent with the students, of course, who barricade themselves in the school and actually haven't really realized yet which hell they ended up in and therefore still like to joke around. When reality strikes and they see their comrades drop like flies it hits them just the harder, naturally. As it is mandatory for a (anti-)war movie realistic brutality isn't sugarcoated in any way. But as is always the case with such films it aren't the bloody scenes that are shocking, but those in which for example Kap-jo is forced to shoot a child during a skirmish. 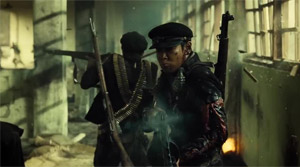 While the beginning and the end convince with breathtaking action the middle part needs to focus more on the characters, naturally. Considering the sheer number of individuals this turns out to be rather impossible, yet there are a few characters that manage to stick in our memory. The story's heart is the tense relationship between Jang-beom and Kap-jo, of course, and how they grow individually and as brothers-in-arms. Doing so they almost get character traits of true action film heroes as they dodge almost every bullet, but since a movie needs to have a suspense curve this may be forgiven. The photograph of the whole unit that is provided at the end may be a rather hackneyed storytelling trick, but the two interviews of actual survivors of this battle that we get to see during the credits in fact manage to touch us along with the appealingly elaborated characters. A war movie that deserves more recognition.